On Thursday November 19 Lai Mohammed Minister of Information and Culture stated that the Lekki shooting was a massacre without bodies.

Mohammed made this known in an interactive session gave his thoughts in response to the detailed investigative report carried out by American news agency CNN.

He said, “While we await the Judicial Panel in Lagos to unravel what transpired at the Lekki Toll Gate, what we can say, based on testimonies available in the public space, is that the world may have just witnessed, for the very first time ever, a MASSACRE WITHOUT BODIES! Some have tagged it ‘social media massacre.”

He said, “Sadly, the purveyors of fake news and disinformation succeeded in deceiving the world that indeed there was mass killing in Lekki, even when, till date, not a single body has been produced and not a single family or relative has come out to say their child or ward was killed at Lekki. 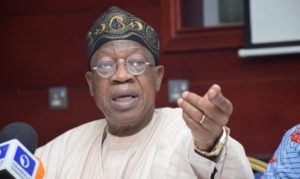 “More surprising and irresponsible is the fact that some people have been calling for sanctions against Nigeria or against Nigerian government officials on the basis of a hoax. This is one of the dangers of fake news and disinformation.

“Once fake news is out, many run with it, without looking back, even when the truth is eventually revealed. We therefore want to use this opportunity to ask those who have alleged massacre at the Lekki Toll Gate to go to the Judicial Panel to present their evidence(s) to the world or simply admit that they have goofed.”