#OccupyLekkiTollgate protesters including popular Comedian, Mr. Macaroni who were arrested in the early hours of Saturday, February 13th were granted N100, 000 bail with sureties in like sum after they were arraigned before a mobile court in Panti.

The court then mandated them to present their certificate of COVID19 test Following their arraignment and adjourned the case till March 2nd, 2020.

According to the state police command, the protesters were arrested on based on, “conspiracy, conduct likely to cause breach of peace and violation of COVID-19 protocols”. 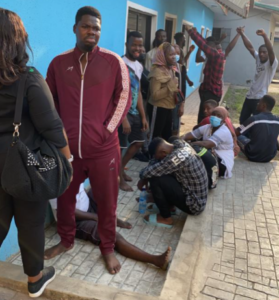