Ahead of 2023 Presidential election, the All Progressive Party (APC) according to reports, are planning to present former President, Goodluck Jonathan and Kaduna State Governor Mallam Nasir El Rufai as the party’s candidates for the polls.

Top party chieftain told Sahara Reporters that the party is considering to present the duo based on their strong appeals in the South and the North respectively.

One of the sources told Sahara Reporters that;

There are plans already to pair El-Rufai with Jonathan for 2023. We believe both forces are strong and have goodwill in their regions and are good for the party. 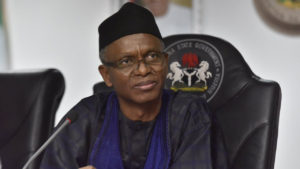 News about Goodluck Jonathan detecting to the All Progressive Party broke out on the internet after he was visited by some of the party’s top members on his 63rd birthday anniversary.

It was rumoured that the visit of APC’s top chieftains to Goodluck Jonathan is an attempt to woo to join the party as some caucus within prefer him to Asiwaju Bola Ahmed Tinubu who is reported to be also interested in the post of the President in 2023.

Nigerians on popular micro-blogging app, Twitter have taken to their respective pages to react to APC’s potential plan to present Goodluck Jonathan and El Rufai as the party’s candidates for the 2023 Presidential election.

Those in political class don't engage in unnecessary fight. They settle scores and do what benefits them.
That being said, Jonathan being El-Rufai's running mate is disasterous and there's no hope of light at the end of the tunnel for Nigeria.

This better remain a rumour.

Bashir Ahmaad now has a lucrative role in the oil industry.

No jokes but this is just taking us all for a ride and they want to use Jonathan/El-Rufai to tell us to calm down?
It's time to fix this for God and country

I repeat: “I’m a Jonathanian & unapologetic about it.” But if the rumor of a possible Goodluck Ebele Jonathan & El-Rufai ticket is true; “I will not only dissociate myself from the Jonathanian movement, I will campaign vigorously against him.

GEJ should enjoy his life, quietly.”

Drafting of his Excellency @GEJonathan to run with El-rufai will fail like a pack of cards. It's plan to return the north, by extension Fulani to power in 2027, to the exclusion of other nationalities, after 8 yrs of Buhari. It's a plan to use GEJ to achieve this and he knows it.

People that are saying it's impossible are still rating these politicians, politicians that can insult Buhari today & shout Sai Baba tomorrow.

Becoming a running mate with El-Rufai under the banner of APC is an Image suicide.

If GEJ agrees to run a joint ticket with El-Rufai, then he's not the man we thought him to be. May that ticket loss. Let the opposition win.