The year 2020 is just a few days away from ending but Davido still has one more video to drop off his latest album, “A Better Time”

David, since the release of the album on the 13th of November, 2020 has dropped three music videos which include, FEM, JOWO and SO CRAZY  off the 17-track album.

With eight days to the end of the year, Davido might just release another music videos for his fans which will usher them into the new year.

Davido took to his Twitter page to conduct a poll as he asked his fans to vote for the music video they want next.

What video off #ABT does y’all want next?

What video off #ABT do y’all want next ?

See some reactions below as fans vote for their preferred video👇

Please the best and holy ground videos can come later .. but we need LALA video ASAP !! Then holy ground next year alongside the best, and please drop a video for FADE , that song is too underrated 😪

Holy ground all the way….. But with Nicki in it
We don't want some audio shit….
Though we believe u can make it happen

Baba please you see that TANANA. Don't sleep on that one too , for now Holy ground ..
Nija to the world 🙌🏼🙌🏼🙌🏼 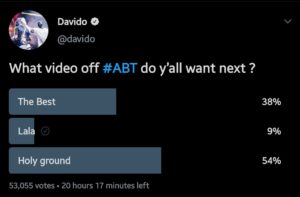