Police are hunting for a ‘lunatic’ driver who knocked down a pair of nude cyclists on a tandem tour across the UK to raise money for charity.

Colin Unsworth, 52, and Sadie Tann, 32, who are riding from Lands End to John O’Groats on a tandem, captured the brazen attack on video last week.

And the pair now say police are taking the incident so seriously that there may be an ‘attempted murder charge’ for the culprits if they’re arrested.

The dramatic attack happened on July 4 while they were cycling through countryside on the outskirts of Perth, Scotland.

A car slows down and turns into their tandem bike, with the female passenger heard yelling at the innocent couple: ‘You’re a f****** prostitute’.

They were knocked to the ground and claimed the car later turned around and came back after them – but thankfully both were left unhurt following the violent incident. 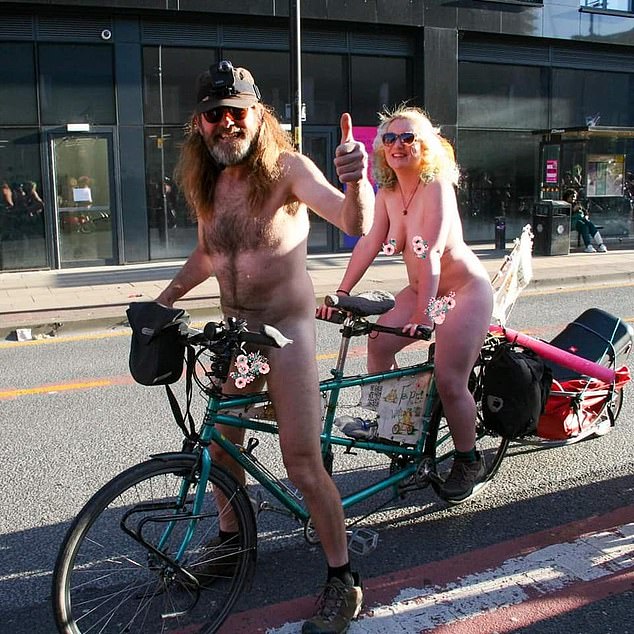 Colin Unsworth, 52, and Sadie Tann, 32, (pictured together) who are riding from Lands End to John O’Groats on a tandem, captured the brazen attack on video last week

Colin, from Adlington, Lancashire, said he was shocked by the driver’s level of aggression after receiving positive feedback throughout their journey.

He said: ‘Most people laugh or give us a thumbs up, or they’ll ask us what we’re doing and we just say it’s for charity and they wish us luck.

‘[But] in Perth, we got attacked by a lunatic driving their car into us.

‘We always knew there would be some people who would ring the police or whatever, but I wasn’t expecting that level of aggression from a member of the public.

‘It shook us up a lot, but physically we are uninjured but it really made us cautious about where we get naked again and which naked stretches we do.

Colin said the local police are now taking the incident so seriously, that they may press charges if they find the culprits.

He said: ‘They are taking it very seriously because the car was driven past us and then turned around and came back for us.

‘There is potential they can fine the driver for a potential attempted murder charge.’ 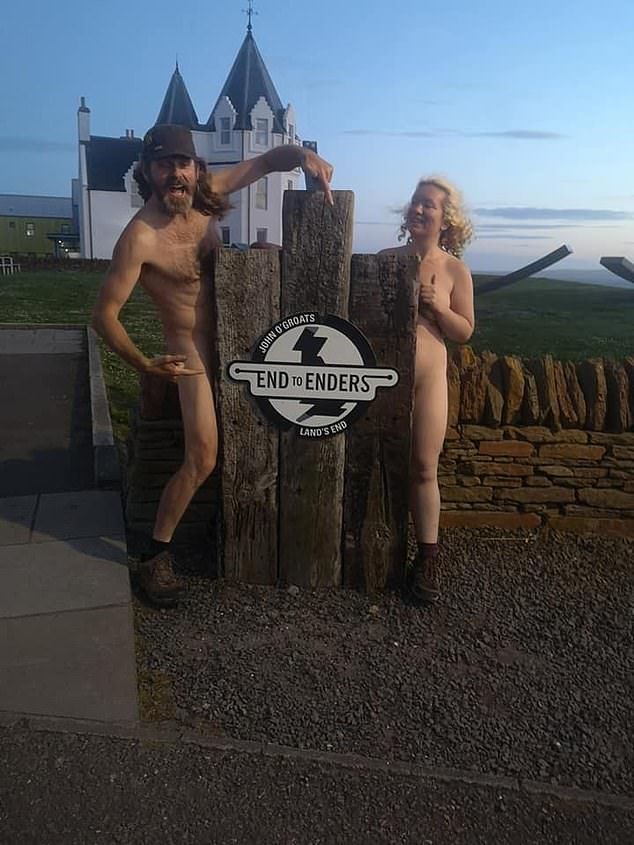 Colin Unsworth and Sadie Tann, pictured at John O’Groats are riding to Land’s End to raise money for charity

‘We were on Facebook live when it happened so there’s video evidence of them in the car, driving past us and then turning round and coming back after us.’

A Police Scotland spokesperson confirmed enquiries were ‘ongoing’ into the incident.

They said: ‘Police enquiries are ongoing after a 52-year-old man and a 31-year-old woman who were riding a tandem bike were deliberately driven at and struck by a car on the A912 near to Bridge of Earn around 2 pm on Monday, 4 July.

‘They did not require hospital treatment. Enquiries are ongoing.’

Colin and Sadie embarked on the 50-mile-a-day journey to raise money for mental health charity Mind and Rewilding Britain, which aims to tackle climate emergency.

Colin explained: ‘I’ve been following the progress of Rewilding Britain and rewilding projects for a long time and I just think it is a fantastic thing that we should all be talking about.

‘As naturists who are into nature connections and value mental health, we thought what we can we do to do some sort of stunt to raise awareness.

‘The Rewilding Britain website says think big and act wild, well there’s no bigger bike ride and it’s a pretty wild day to do it.’

Rewilding aims to restore ecosystems to the point where nature can take care of itself and restore people’s relationships with the natural world.

They have received an ‘overwhelming’ amount of positive support since the pair started the journey, with people giving them lunch and places to stay for the night.

Colin said: ‘The majority of people will pip their horns and wave or laugh at us.

‘We get people who overtake us, turn around and pull into the side of the road to take a video.

‘I think most people can see we are not doing any harm, and we are doing something that’s quite brave.’

He added: ‘As we was coming up outside Edinburgh Castle, there was a coach load of Japanese tourists and we could just hear the uproar and the laughter.

‘They were all absolutely rolling around laughing, trying to get their cameras out.’

The pair are planning to continue their journey travelling around the country, and finishing in John O’Groats at the end of July.