A policeman has reportedly injured an underage girl on Friday, June 19th in the Ayobo area of Lagos State.

Reports state that the police were in chase of a motorcyclist in Ayobo and the street was narrow. 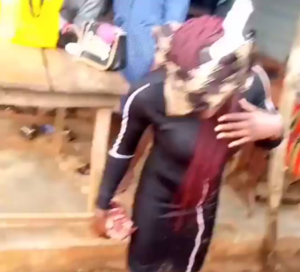 The underage clashed with the policeman in the chase and resulted in a fatal injury.

The underage girl was so badly injured that her blood was a pool in the sand.

The eye witness who was at the event and shared the video gave his thoughts on the incident, he said, “Igeshu Police Man just wounded an underage trying to pursue a bike man inside a closed [email protected]…Very sad..”

“IGESHU POLICE JUST INJURED AN UNDERAGE GIRL JUST COS HE WAS PURSUING A BIKE MAN…THIS IS SO TERRIFIC AND AN ACT OF INJUSTICE..PLEASE NIGERIANS LETS FIGHT FOR THIS CITIZENS.”