A couple are ‘lucky to be alive’ after they were smashed by a giant wave while trying to take a selfie.

The man and woman had been enjoying the wild weather and watching on as massive 4.1m swells crashed against Nobbys Breakwall in Newcastle, north of Sydney early Monday morning.

Moments later the pair were washed away by a monster wave and disappeared into the whitewash with the harrowing moment captured on camera by shocked bystanders.

‘I realised they disappeared and went down, where they were scrambling onto the rocks,’ Ben Arkinstall told NBN News.

‘Several waves came in behind the original wave and kept coming over the top of them.’

‘It could have been a lot worse. They may have ended up in the ocean. They lost all of their phones.’

The man aged in his 40s and woman in her 30s miraculously made it to shore, where they were treated by paramedics before being taken to hospital with multiple injuries, including suspected fractures.

Paramedics said the pair are very lucky to be alive.

‘Patients being swept into the water can be a dangerous, life threatening situation,’ NSW Ambulance Inspector Jake Broughton-Rouse said.

‘On this occasion the patients were able to make it back to the breakwall where paramedics treated them for suspected multiple fractures.

‘This is a reminder for people to remain safe and vigilant around the water, especially when there are dangerous surf conditions. Our patients today are extremely lucky to be alive.’ 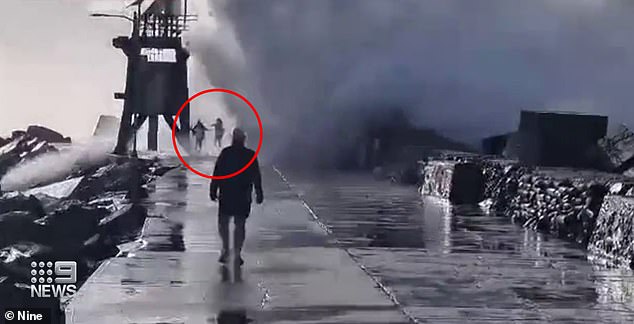 The near-tragedy unfolded on a day where the Bureau of Meteorology issued hazardous surf warnings along the entire 1300km NSW coastline from Byron in the north to as south as Eden.

The massive swells also battered Sydney’s coastline on Monday, where a lifeguard tower was left teetering on a rapidly disappearing wall of sand near Cronulla and needed cranes to be lifted to safety.

‘I’s not the worth the risk going out all the way out  to the breakwall with such a big south swell, it’s magnet out there,’ lifeguard Michael Boldy said.

‘This is what happens, they get injured.’ 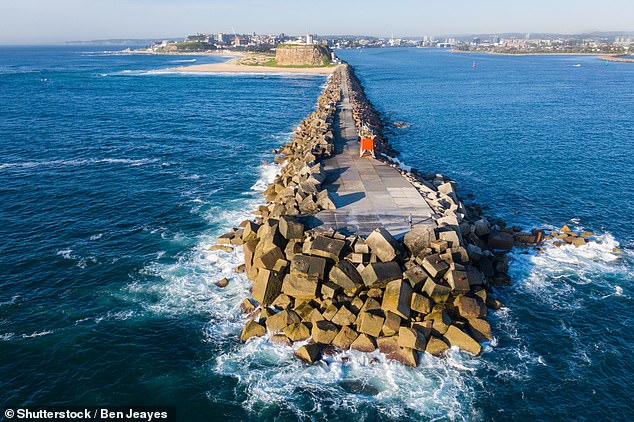