Speaker Nancy Pelosi tested positive for covid on Thursday as a new wave of cases hit the Washington D.C. area.

Her office said she had tested negatively previously this week.  The speaker is vaccinaed and boosted.

Pelosi, 82, was at the White House on Wednesday when President Joe Biden signed a postal reform bill. She stood by the president and shook hands with him.

She was also at the White House on Tuesday for an event with Biden and former President Barack Obama to mark the anniversary of the Affordable Care Act. She hugged Obama and Biden at that event.

None of them wore face masks at the crowded events.

Pelosi’s office said she has no symptoms and is quarantining.

‘After testing negative this week, Speaker Pelosi received a positive test result for COVID-19 and is currently asymptomatic. The Speaker is fully vaccinated and boosted, and is thankful for the robust protection the vaccine has provided. The Speaker will quarantine consistent with CDC guidance, and encourages everyone to get vaccinated, boosted and test regularly,’ Pelosi’s spokesman Drew Hammill said.

Pelosi was not at Saturday night’s Gridiron dinner, a white-tie event of Washington media and officials. Hammill was in attendance.

Biden’s sister Valerie Biden Owens, 76, was at the Gridiron dinner and tested positive for covid, her publisher announced. A planned party for her memoir was canceled and her publisher said she is not a close contact with the president or first lady.

But Biden’s maskless appearances at events featuring people who later tested positive for covid will raise more questions about the safety protocols surrounding the 79-year-old president. 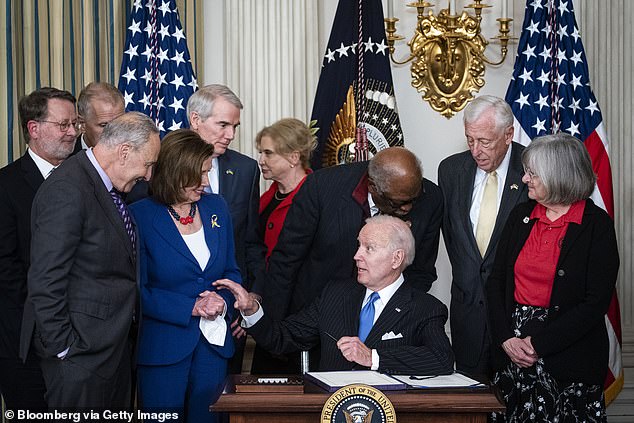 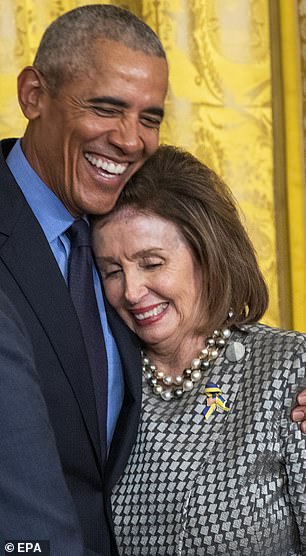 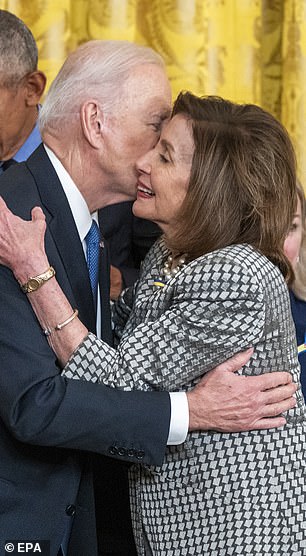 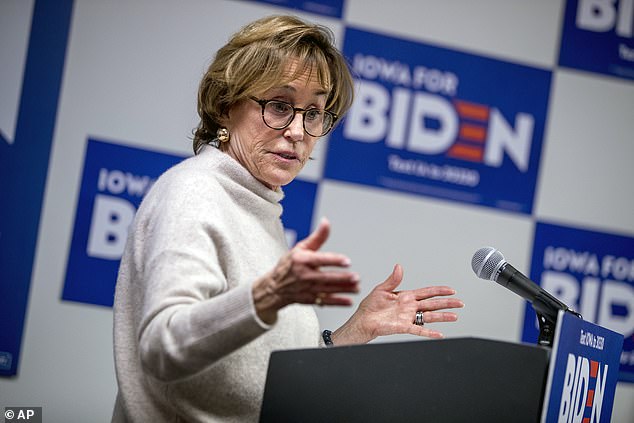 Biden’s sister Valerie Biden Owens, 76, was at the Gridiron dinner and tested positive for covid

On Wednesday, several lawmakers, cabinet members and senior staff announced they tested positive for covid after attending the invitation-only exclusive Gridiron dinner, which is showing signs of being a super spreader.

Kamala Harris’ communications director was one of them and is considered a close contact to the vice president, Harris’ office said.

Jamal Simmons, who joined Harris’ office in early January, is isolating and working from home.

President Biden was next to Harris at Tuesday’s event in the East Room. The White House said he was last tested for covid on Monday and was negative.

Harris ‘will follow CDC guidance for those that have been in close contact with a positive individual and will continue to consult with her physician,’ her spokesperson Kristin Allen said in a statement. ‘The Vice President plans to continue with her public schedule.’

Harris’ office did not immediately respond to inquiries about when the vice president was last tested for covid. She did not appear with President Biden at an event Wednesday afternoon where he signed a postal reform bill.

The Centers for Disease Control and Prevention defines a close contact as someone who was less than 6 feet away from an infected individual for more than 15 minutes. 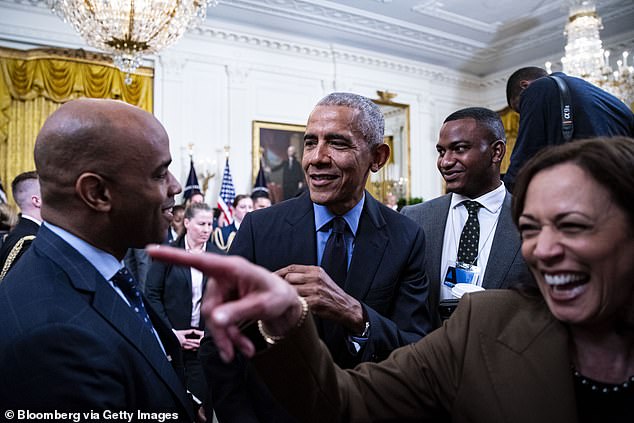 Jamal Simmons (left) with former President Barack Obama and Vice President Kamala Harris at an event at the White House on Tuesday; Simmons tested positive for covid on Wednesday 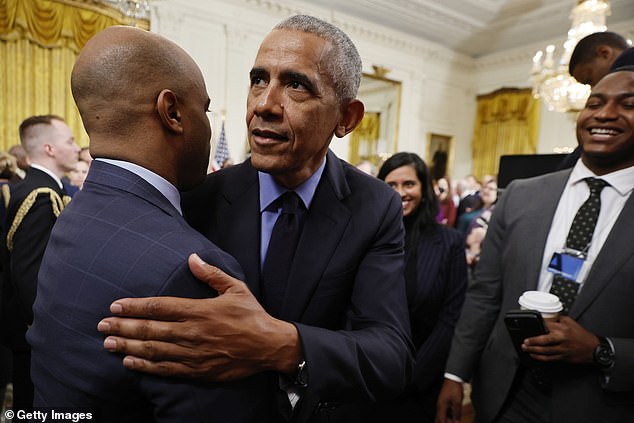 Obama gave Simmons a hug at the event

NEW: Responding to my question what he says to Democrats worried about the midterms, President Obama tells me: “We got a story to tell, just got to tell it.” pic.twitter.com/eBFsi0o9rA

Simons is the latest covid case among a spike of positive tests through Washington D.C.’s bold-faced names, many of which have close ties to the White House.

Attorney General Merrick Garland tested positive for covid on Wednesday after sitting at the head table with Commerce Secretary Gina Raimondo, another positive case, at the white-tie Gridiron Dinner.

Garland, who is vaccinated and boosted, is showing no symptoms.

‘He asked to be tested after learning that he may have been exposed to the virus,’ the Justice Department said in a statement.

The announcement came after Garland held a press conference Wednesday on Russian sanctions. He did not wear a face mask and was surrounded by his deputies.  He will isolate at home for at least five days and return to the office following a negative covid test.

‘Today, I tested positive for COVID. Fortunately, I am fully vaccinated (and boosted!), and I am confident that this vaccine is the reason I don’t have more severe symptoms,’ she wrote on twitter.

The department said she shared her diagnosis ‘out of an abundance of transparency.’

She will isolate for five days and work from home.  Raimondo stayed late at the event, hanging out at an after party and speaking to several members of the media who were in attendance.

President Biden was not considered a close contact, the Commerce department said.

Biden was not at Saturday night’s dinner. Neither Garland nor Raimondo attended a packed White House event on Tuesday celebrating the Affordable Healthcare Act, where Biden and former President Barack Obama spoke.

Gridiron Club president Tom DeFrank said on Wednesday afternoon that there are 14 dinner guests who are known to have tested positive for covid.

‘There is no way of being certain about when they first contracted Covid,’ his statement says. ‘But they did interact with other guests during the night and we have to be realistic and expect some more cases.’ 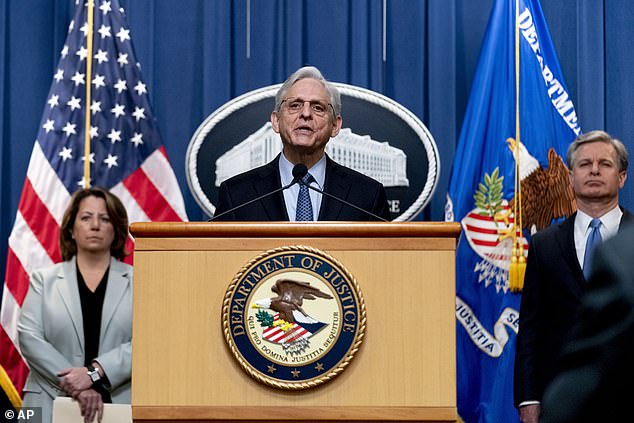 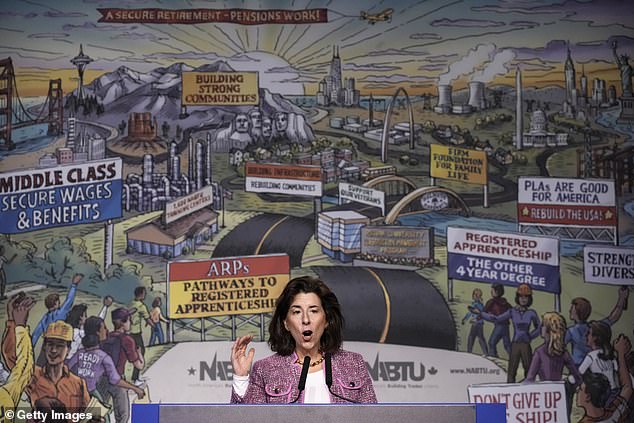 Raimondo was the keynote speaker at Saturday night’s Gridiron dinner, one of the poshest events of the D.C. social season. The private dinner, held in a Washington D.C. hotel, did not release photos or video footage of the night.

Guests were required to show proof of vaccination but were not required to have a negative covid test ahead of the dinner.

More than 600 people crowded together in rows of tables in the Renaissance hotel ballroom.

Most attendees at the dinner, which included members of Congress and other administration officials – were maskless.

Among those in attendance were Dr. Anthony Fauci and Centers for Disease Control director Dr. Rochelle Walensky.

‘I’m feeling fine, and grateful to be vaccinated and boosted. In the coming days, I will quarantine and follow CDC guidelines,’ Schiff tweeted.

‘Unfortunately, after avoiding COVID-19 for two years, I’ve come down with it. I tested negative yesterday & last Thursday, but positive today,’ Castro tweeted on Tuesday. 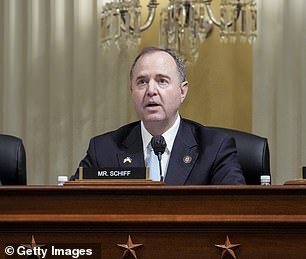 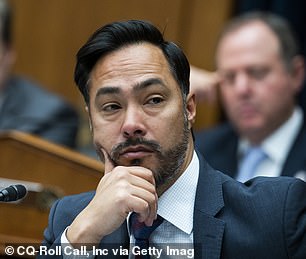 Psaki said on Monday that the White House covid policies have not changed in light of the jump in cases with close ties to the administration.

‘And meetings with the President are often socially distanced in many circumstances as an additional precaution, even as people are tested,’ she noted.

Biden is vaccinated and boosted. He received his second booster shot last week.

The Gridiron Club dinner is an off-camera, off-the-record event for members of the media. Politicians and other a-list figures are invited to its annual dinner.

The event features a Republican speaker, a Democratic speaker, and a speaker representing the sitting administration, along with a series of sketches performed by club members.