An American Airlines passenger has revealed that she and other travelers were forced to vacate a plane set to take off because the pilots had reached a cap on their flying time – all after enduring a five hour delay.

The incident, which occurred Saturday at in North Carolina’s Charlotte Douglas International Airport, saw dozens of travelers escorted off the plane without warning just 20 minutes after boarding the Boston-bound aircraft.

One of those passengers, Sheila Gray, had arrived at the airport hours earlier, accompanied with her husband and two children. The family was looking to return to their home in Boston after taking a brief summer vacation in Rome.

However, their plans were soon though to the wayside, in what looks to be yet another instance of travel misery in the US, spurred by a shortage of pilots and other staffers.

The shortage has become the latest flashpoint for anger against the embattled airline industry, as several prominent companies continue to face backlash over a mass cancellations and reports of poor service. 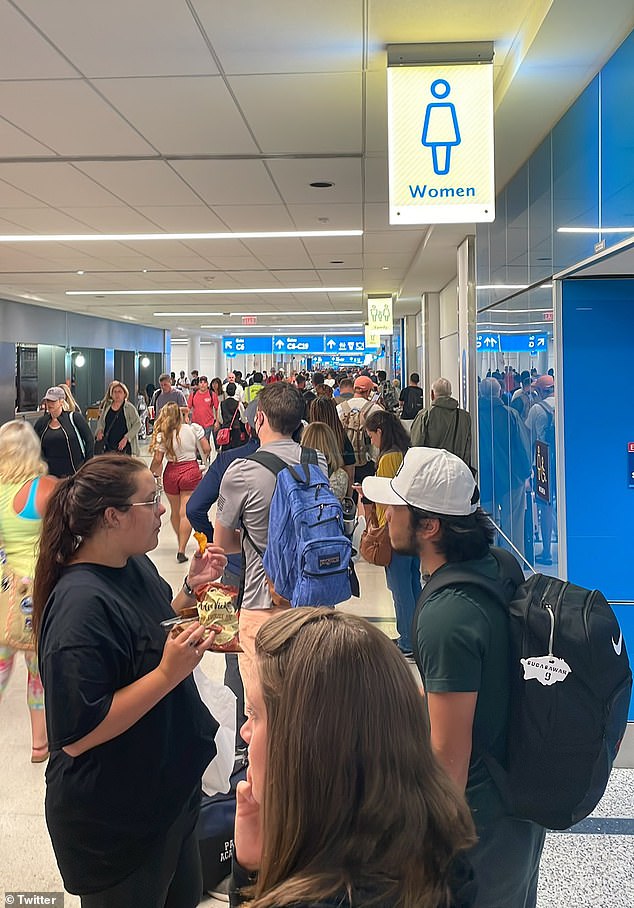 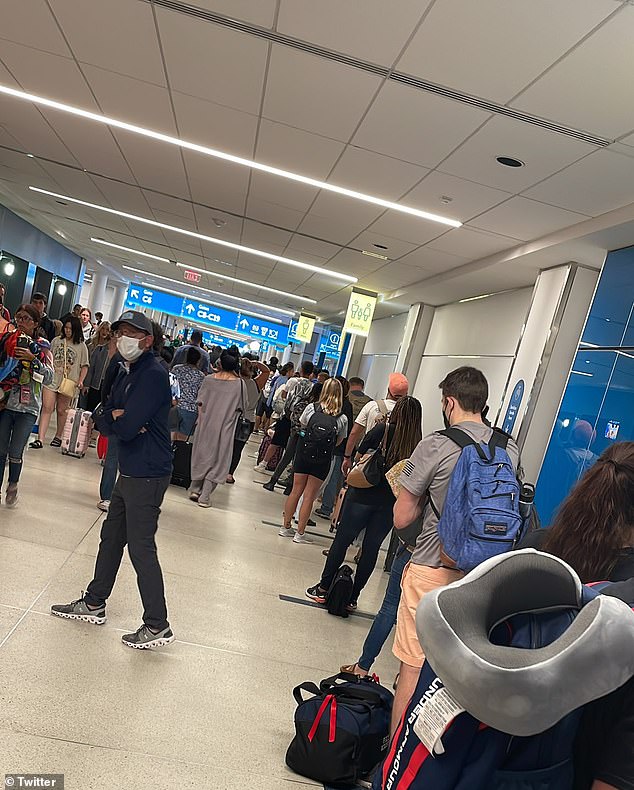 The incident, which occurred Saturday at in North Carolina’s Charlotte Douglas International Airport, saw dozens of travelers escorted off the plane without warning after boarding the Boston-bound aircraft

Gray said she and her husband and two daughters arrived at Charlotte Saturday morning after returning from their European vacation. Upon arriving at the airport, the family found themselves stranded for hours after a series of delays.

The mom told Insider over the weekend: ‘All I wanted was to get home to my bed. I had been up for 24 hours at this point.

‘The deplaning was just the straw that broke the camel’s back.’

During their lengthy layover – which Gray said lasted five hours – the family was reportedly told by a gate agent that ‘the plane was in a hanger being repaired,’ hence the delay.

Hours later, the family was finally on the plane – but their tribulations were far from over.

About 20 minutes later, when the plane was poised to take off, the pilot’s voice suddenly blared on the loudspeaker.

He asked all passengers to leave the aircraft, Gray said, because ‘the crew has timed out and couldn’t fly’ due to their pre-set hours being exhausted. 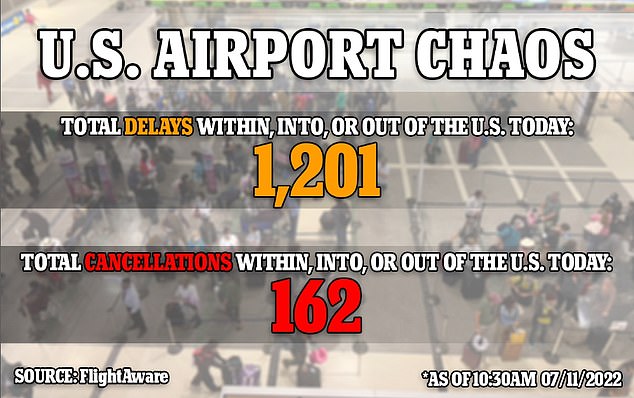 The announcement sent the hordes of passengers into a frenzy, as they struggled to find alternative routes to their respective destinations.

She said the airline did not offer any form of compensation to the fliers.

‘We all deplaned and started scrambling to see if we could find other flights,’ Gray recalled to the outlet of the chaos that ensued.

‘People were angry and yelling at the gate agents,’ she went on.

The flight was then again rescheduled, with the passengers forced to wait again.

Eventually, the travelers were allowed to board the plane, after the airline tracked down a replacement crew to fly the plane.

Gray said that at this point, a frustrated passenger was booted off the aircraft after the re-boarding.

She told the outlet: ‘One irate gentleman in the gate area was later escorted off the plane after we re-boarded. I did not hear him causing a commotion on the plane but had seen him after we were taken off the plane.’

On Twitter, dozens complained about poor service and delays at the North Carolina airport

Gray says that she is also frustrated with the airline’s behavior, particularly the pilot, due to the fact he must have known his and his crew’s hours were about to be off-duty before the passengers arrived on the aircraft.

‘Surely he knew he was about to time out before we boarded,’ Gray told the outlet. ‘He continued to let us board anyway.’

She added that ‘the gate agents and flight attendants were wonderful’ despite being frustrated with the airline over the incident.

She said she has reached out to the company, sharing text messages showing the numerous times her flight was rescheduled, but has not yet heard back.

Gray added that this was not the family’s only bad experience with American as of late, revealing last month the family missed a connecting flight from Philadelphia to Boston after their flight from Paris was delayed. 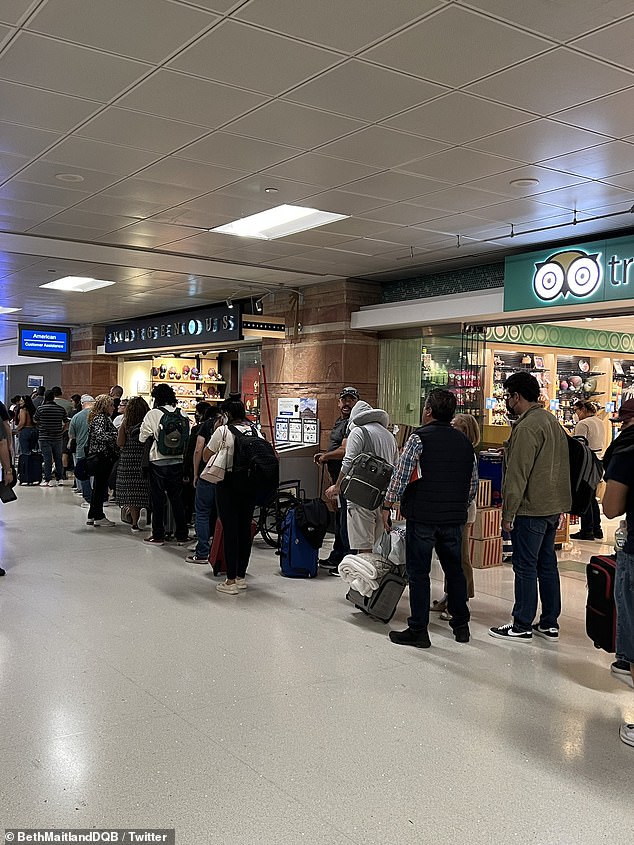 Meanwhile, the industry continues face backlash from passengers irate over the mass of cancellations and poor service, more than likely spurred by the shortage. Pictured are backed-up lines at Phoenix Airport over the weekend. Similar sights have become commonplace across the country amid the staffing shortage

Meanwhile, the industry continues face backlash from passengers irate over the mass of cancellations and poor service, more than likely spurred by the shortage.

On Monday morning, an astonishing 162 flights into or out of the US were reported as canceled by flight tracker FlightAware.com, marking nine straight days of mass cancellations.

American Airlines – the largest airline in the – account for more than half of those cancellations, with 262 as of Monday at 11 am.

Delays have been ever more rife, with the US reporting 1,201 Monday – with American and Delta seeing 129 and 162, respectively.

The shortage, experts familiar with the industry say, first surfaced after the companies reduced staffing early in the pandemic, and have since struggled to bounce back.

Travel rates, meanwhile, have returned to pre-pandemic paces – sparking fears ahead of the July 4 weekend that the airlines will not be able to keep up with that demand.

Multiple travelers have taken to Twitter to complain about recent experiences with the airlines – airing grievances ranging for broken or lost luggage, unannounced cancellations, and all-around bad service.

Late last month, he Air Line Pilots Association – the world’s largest pilots union – approved a contract that will boost the pay of pilots at United Airlines – the third most popular airline behind American and Delta by more than 14 percent.

The move could signal light at the end of the tunnel for the staffing crisis, and could set the stage for similar wage hikes across the industry.