A Queensland man has spent almost three weeks helplessly watching his Australia Post parcel make an around-the-country expedition – despite the package having been sent from a spot just two hours down the road.

Through the online package tracking, Gold Coast local Bruce told Ben Fordham on 2GB he could see all the stopovers made by his parcel of supplements as it made the mammoth journey.

Bruce said the order, one he made every six months, was usually problem-free, always arriving few days after he placed it because it only had to travel from northern NSW up to the Gold Coast.

But this time, the parcel went on multiple laps around the country, making visits to each eastern state instead of directly travelling the 160km between sender and recipient directly.

Bruce decided to share his own parcel’s itinerary in response to an earlier caller on 2GB, who shared a story of how his parcel made a 10,000km journey between states.

‘The thing is, it really must have loved some of those locations, because it kept on travelling back.’

The package made three stops in Redbank, Queensland, four to an Australia Post hub in Sunshine West, Victoria and frequented the western Sydney industrial suburb of Chullora.

But Bruce joked he had bad news for any listeners in the country NSW town of Parkes because his parcel hated it there and only went once. 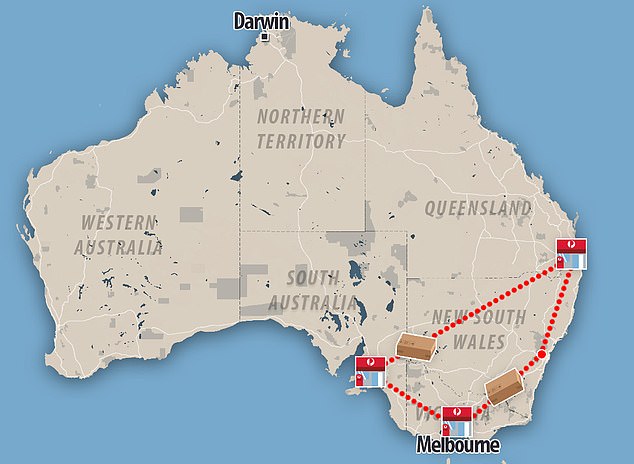 The parcel racked up around 18,000km on its 18-day journey around Australia’s southeastern states

Bruce did ‘balance the ledger’, detailing a speedy previous Australia Post experience where he received his parcel in a day.

He also praised the company’s high-tech tracking system and the sheer number of parcels Australia Post handles each day.

‘You’ve got to commend them for one good thing that they’re doing very well and that’s their tremendous tracking system, you know? A parcel may not be going where it should be but you can still watch it on its journey, like a travel blog,’ he laughed.

The parcel made more than 30 stops with the tracking information showing Bruce made a customer enquiry a week after it was dispatched, before the package continued to make more stops around Australia. 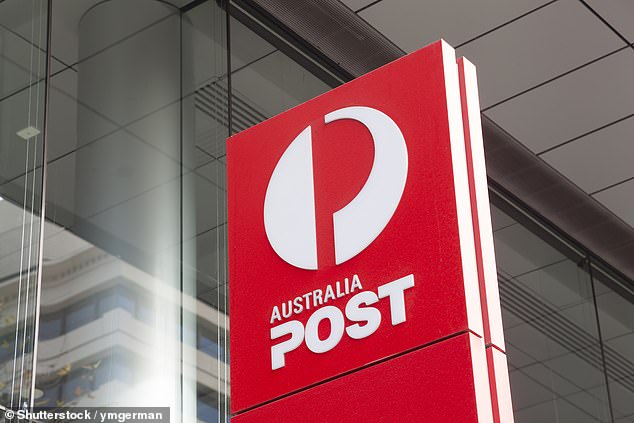 Bruce still commended Australia Post on its parcel tracking system, saying watching his package go around the country was a bit like a ‘travel blog’

Earlier in the week, a Gold Coast father revealed a gift he ordered for his wife hadn’t arrived after three weeks.

Shipping information showed it traversing back and forth between Sydney and Brisbane.

The gift had been ordered from Western Australia and, according to the father’s tracking information, enjoyed the journey so much it decided to stay travelling on the road and in the air.

The customer, in lower spirits than Bruce, told Ben Fordham the ongoing debacle was ‘ridiculous’. 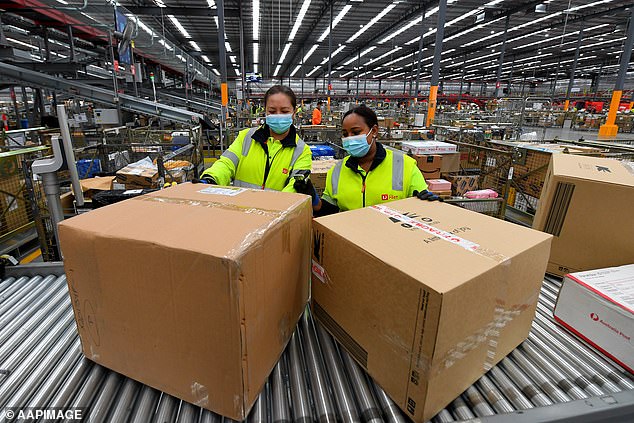 Bruce wasn’t the only one with an itinerant package, another caller earlier in the week told 2GB his package hadn’t arrived in three weeks and failed to see much humour in the situation

‘It’s gotten to the stage where it’s laughable, it’s like a guessing game of where it will be each day,’ Nick told Ben Fordham.

‘Australia Post needs to change their song on their ads to “we’ve been everywhere man” because it doesn’t get to us.

‘When you look at the tracking number the first time, it says because of Covid-19, there could be delays.’

Australia Post responded to Nick’s claims with a spokesman telling Daily Mail Australia the delay was caused by the customer providing the wrong address.

Australia Post estimates parcels from Western Australia to Queensland should arrive within six to eight business days but said deliveries are still being impacted by Covid-19.

‘While we will endeavour to meet this timetable, the actual delivery speed will depend on where in each state/territory the item is being posted from/to, and the level of restrictions and congestion in our delivery network at the relevant time,’ the website stated.

‘Most parcels are arriving on time, but delays may be experienced.

‘Our operations are being affected by very high numbers of Covid-19 cases in the community.’