They were the women who combined a life of crime in 1950s London with marriage and even motherhood.

Notorious burglar Zoe Progl broke into her first house at the age of 13 and went on to become the first ever prisoner to escape over the wall from Holloway Prison in north London.

Eva Fraser – the sister of notorious gangster Mad Frankie Fraser – was reputedly one of the last members of the Queens of the Forty Thieves shoplifting gang, which sold stolen goods from the likes of Selfridges to poor South London housewives.

Another leading shoplifter was Shirley Pitts, who began stealing coal to survive the slums of Waterloo but soon became so prolific and good at theft that she was banned from many West End shops.

Shirley claimed to have been one of the last girls taught to steal by the fearsome Alice Diamond, the six foot tall Queen of Thieves, who wore diamond rings as knuckledusters and ran the Forty Thieves gang from the 1920s to the 1940s.

The exploits of the women helped to inspire author BEEZY MARSH’s new novel Queen of Clubs, which is released later this month.

Below, the writer recounts the incredible tales of the women of London’s criminal underworld.

Staring at the pile of coal heaped high against the prison wall, the young woman took a deep breath and ran at it, losing her shoes as she scrambled to the top, ripping her uniform to shreds.

Her heart pounded in her chest as she faced the 7ft drop to the other side, dangling by her arms before landing with a sickening thud.

She’d cleared the inner wall and now only the 25ft outer wall stood between her and freedom, but there were only moments to go before someone noticed she was missing.

Right on cue, her boyfriend threw a rope and metal ladder over from the other side, as she had arranged, and convicted shoplifter and thief Zoe Progl became the first woman ever to escape from the grim confines of Holloway Prison, speeding away in a stolen car.

Inevitably, her daring escape made headlines and she was recaptured after a couple of weeks, despite having dyed her trademark blonde hair red. 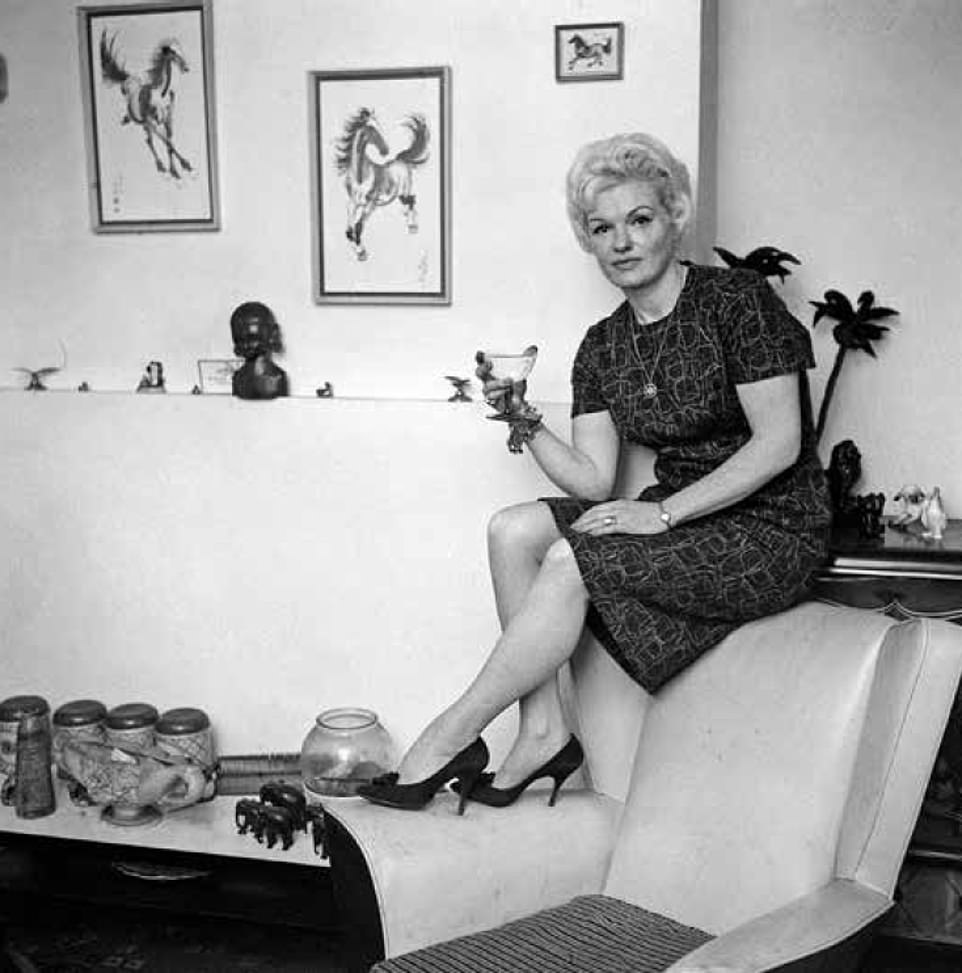 They were the women who combined a life of crime in 1950s London with marriage and even motherhood. Notorious burglar Zoe Progl (left) broke into her first house at the age of 13 and went on to become the first ever prisoner to escape over the wall from Holloway Prison in north London

She later reported that the best part of being on the run was being reunited with her toddler daughter at a caravan park on the south coast for a few days.

The shameless exploits of Progl, a girl born into poverty in the East End of London, who decided she wanted to be rich at all costs after being evacuated to live with a wealthy family during the Second World War, are just one of a number of shocking stories which helped to inspire my latest book, Queen of Clubs.

It is a fictionalised version of Soho’s 1950s gangland history, told from the point of view of the women who fought for power and wealth in that seedy underworld.

At a time when a woman’s place was in the home, young women like Zoe refused to be constrained by society’s rules, or even the criminal codes set down by the male gangland bosses, making a name for themselves for all the wrong reasons.

She married a US Army sergeant at the age of 18 but soon left him after growing tired as an army housewife.

Impoverished but very pretty, Zoe learned her dubious skills including burglary and shoplifting from career criminals who frequented Soho’s clubs and bars in the booming post-war years. 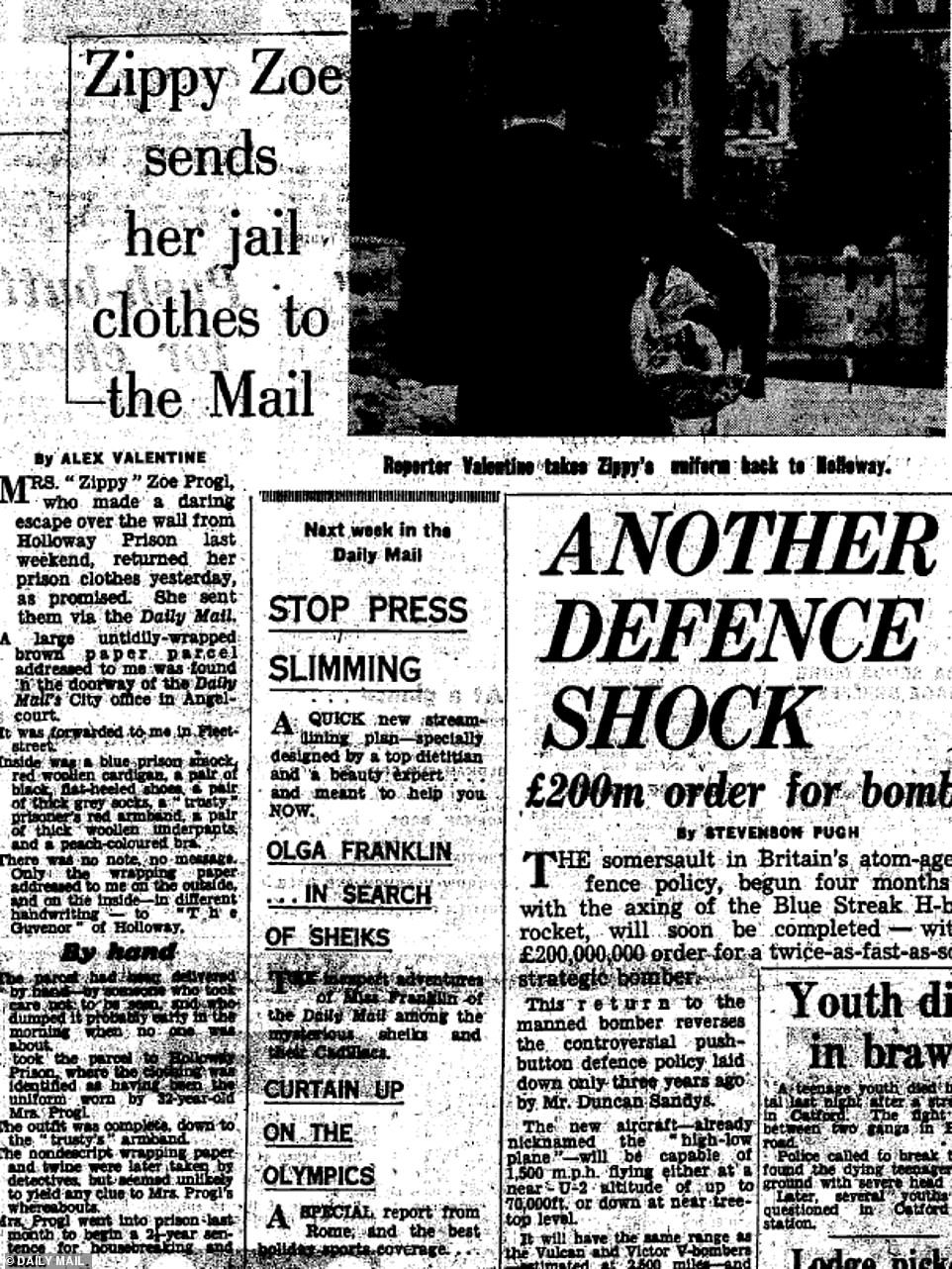 The Daily Mail published this article shortly after Progl’s escape from Holloway Prison. It recounted how she had returned her prison clothes to the jail via the newspaper 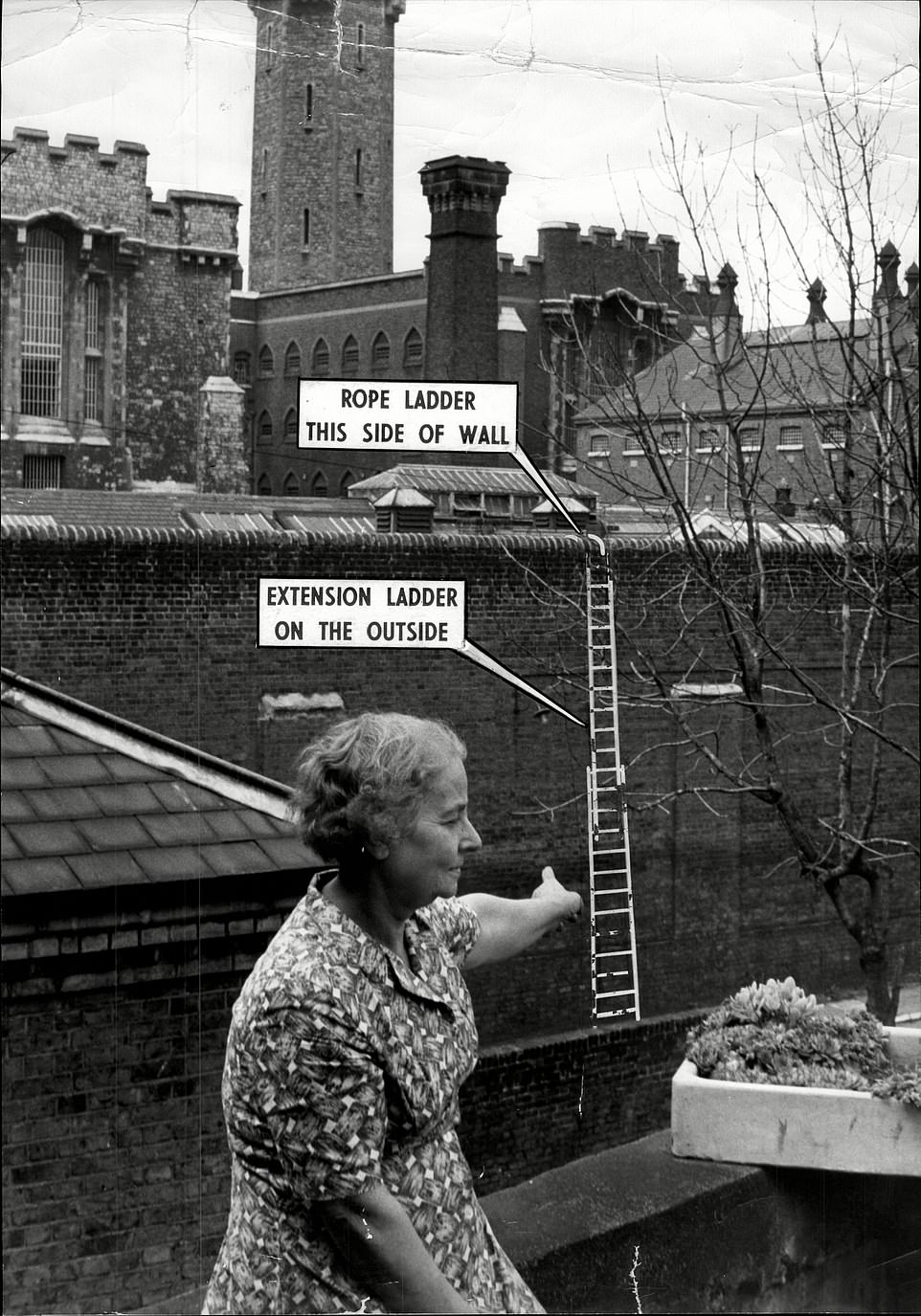 Progl used a rope ladder which had been thrown from the other side to clamber over the prison wall. Above: Resident Constance Heafey witnessed Progl’s escape

Whilst married to second husband Roy Bowman, she had two children by gangster Tommy ‘Scarface’ Smithson.

Having become an expert in burglaries and the ‘jump up’, Zoe robbed lorries at warehouses and once made off with a haul of furs worth over £250,000 – all while trying to raise a young family.

Despite this, Zoe’s life was ultimately a tragedy, punctuated with domestic violence, prostitution and drug addictions and if she had wealth, she never managed to hang on to it for long. 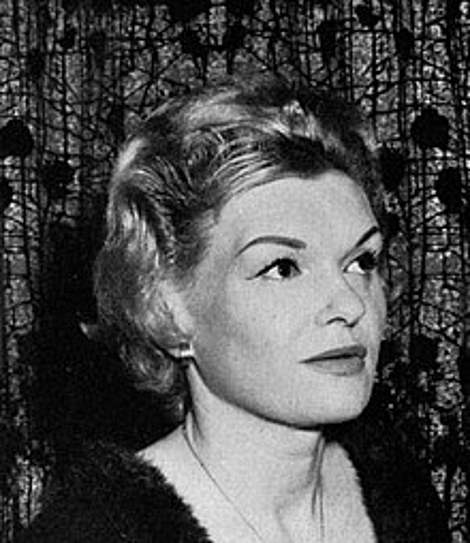 But there were other women who were much more savvy about carving themselves an underworld career.

One of them was Eva Fraser.

Eva, whose daughter Beverley is still alive and whose husband Jimmy used to beg her to give up her life of crime, was reputedly one of the last Queens of the Forty Thieves shoplifting gang.

The gang ran amok through stores including Selfridges, stealing luxury goods which were sold on to poor housewives all over South London, for a knock-down price.

As the sister of the notorious gangster, she helped to run his Soho clubs for him when he was jailed in the 1950s for his part in a legendary razor attack on the gangland boss Jack Spot, orchestrated by Soho’s Mr Big, Billy Hill.

Eva even sent her young daughters in a taxi to collect Frank’s dues from his West End businesses, in order to outsmart the eagle-eyed detectives from the Flying Squad. The girls would bring piles of cash home to South London in a shoe box, innocently sipping on bottles of lemonade.

She was reputedly so revered in gangland that Frank Sinatra paid her a visit when he came to London in the early 1970s, causing quite a stir around her home turf, the Elephant and Castle.

Its residents had never seen anything quite so glamorous as Ol’Blue Eyes popping in for a cup of tea. 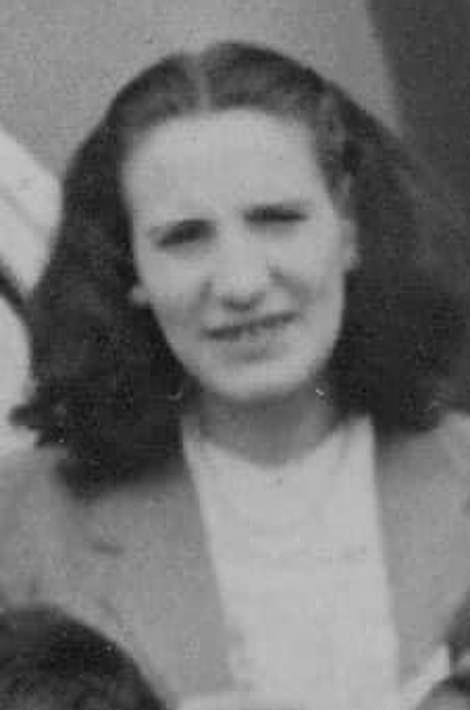 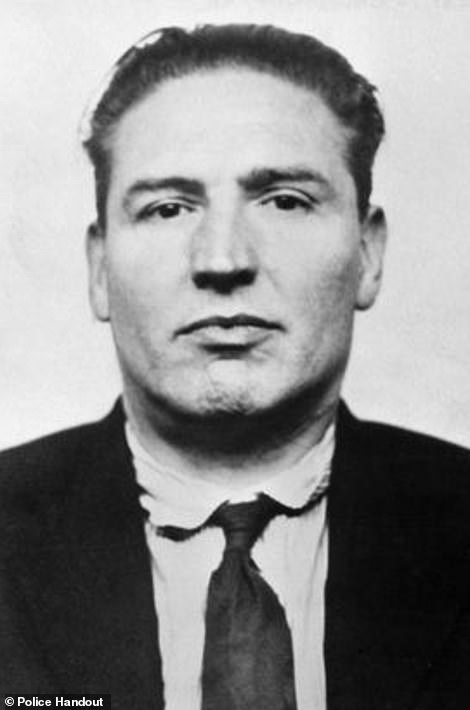 Eva Fraser – the sister of notorious gangster Mad Frankie Fraser (right) – was reputedly one of the last members of the Queens of the Forty Thieves shoplifting gang, which sold stolen goods from the likes of Selfridges to poor South London housewives

After a day spent shoplifting or ‘hoisting’ with her gang, Eva loved nothing more than to rub shoulders with starlets including Diana Dors or Barbara Windsor at the Astor nightclub, which was one of the places to be seen in the 1950s.

But she never wore what she had stolen. Part of the gang’s code was that all hoisted goods had to be handed to the Queen and were then fenced on in return for a generous weekly wage. 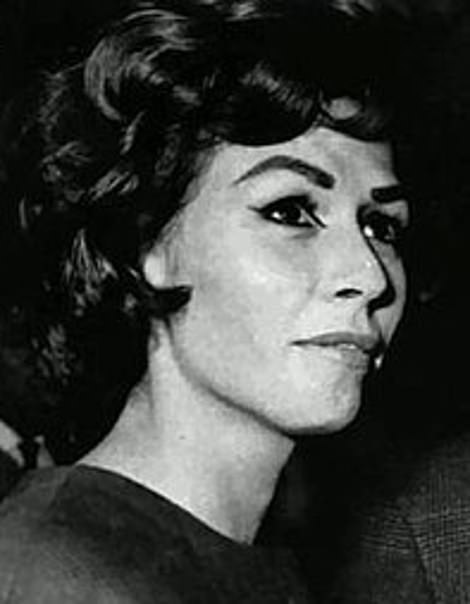 Shoplifter Shirley Pitts, who began stealing coal to survive the slums of Waterloo but soon became so prolific and good at theft that she was banned from many West End shops

The girls from the Forty Thieves would brazenly march into the shops they’d robbed earlier in the week and buy designer dresses for a night on the town.

Some of the gang also stole to order for up and coming actresses who were on meagre wages from their studios but wanted to look every bit as glamorous as their American screen idols.

Eva was incredibly secretive about her gangland role, combining it with marriage, motherhood and serving as a matriarch, providing a listening ear for anyone in her tight-knit community who had troubles they needed to share. But she was also a woman not to be messed with.

She once marched into a South London pub armed with a cricket bat and destroyed every piece of glassware because she’d heard that the landlord had been badmouthing her brother Frankie, who was by then in jail for his part in the notorious Richardson gang.

Frankie was alleged to have pulled out his victim’s teeth with pliers. Nobody dared to retaliate as Eva smashed all the bottles of spirits at the bar to smithereens in a rage.

Billy Hill was the Boss of Soho during the 1950s but his women weren’t wallflowers either. His first wife, Aggie Sullivan, ran the New Cabinet Club in Soho, which acted as an unofficial Labour Exchange for the underworld.

The gangster Mad Frankie, who I interviewed before his death in 2014, told me: ‘If Aggie said you were buying her a drink, you didn’t argue. She had a look in her eye and nobody crossed her.’

The only problem was that Billy Hill was cheating on the fearsome Aggie with young woman he’d employed to make sandwiches in one of his gambling dens. Keeping the two women happy – and apart from each other – required more tact than stopping rival factions of warring gangs from spilling blood.

Billy’s long-term girlfriend ‘Gypsy’, real name Phyllis Riley, acted as a getaway driver on some of his most lucrative robberies during the 1950s, including the Eastcastle Street post office van robbery, which remains unsolved to this day. A haul worth over £8m was stolen.

Unsurprisingly, Gypsy lived the high life, as her lover Billy showered her with diamonds and furs. She jetted off on holiday to the South of France and even opened a nightclub in Tangier which was frequented by the Rolling Stones. It was a far cry from her impoverished upbringing in Ilford, Essex.

Despite her designer clothes and sparkling jewels, she was also violent, once beating a woman with a chair leg in a central London hotel simply because she felt slighted.

Shirley Pitts, who had several children and endured domestic violence, became an expert at disguises to get around the entry bans imposed on her by West End shops she had previously robbed. 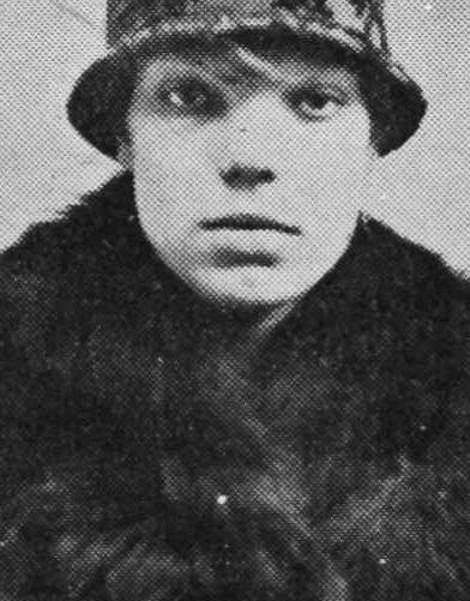 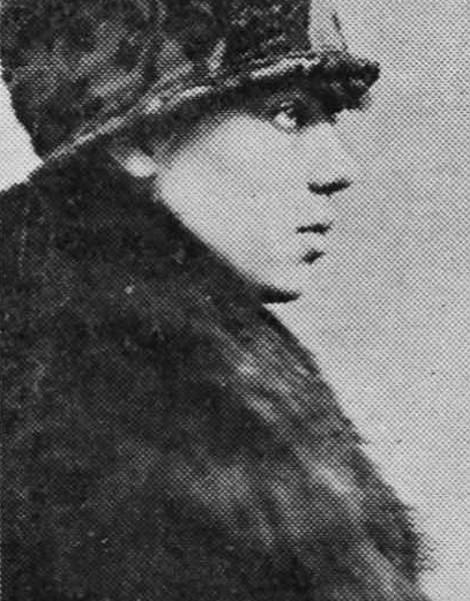 Alice Diamond, the six foot tall Queen of Thieves, wore diamond rings as knuckledusters and ran the Forty Thieves gang from the 1920s to the 1940s. Above: Her police mugshot

She changed her appearance with wigs, glasses, and an array of different hats, to fool the store detectives.

She was remembered in tributes from Reg and Ronnie Kray when she died of breast cancer in 1992. The biggest floral display on her hearse was one saying, ‘Gone Shopping’.

There were rumours that Shirley was buried in her favourite Zandra Rhodes dress which she’d hoisted but those were false because no shoplifter worth their salt would wear what they had stolen.

Their loot was always fenced on and they got a thrill from going to the shop to buy what they wanted with their ill-gotten gains.

The gang led by Alice Diamond was unprecedented in its success and longevity but also in providing an alternative – albeit criminal – career for working class women and girls whose options were usually either to go to work in the factory or be a stay-at-home mother.

Their criminal antics spawned the later generation of matriarchs such as Zoe, Eva and Shirley who took on the male world of gangland and carved a unique role for themselves in underworld history.

Queen of Clubs is published by Orion on October 6th. 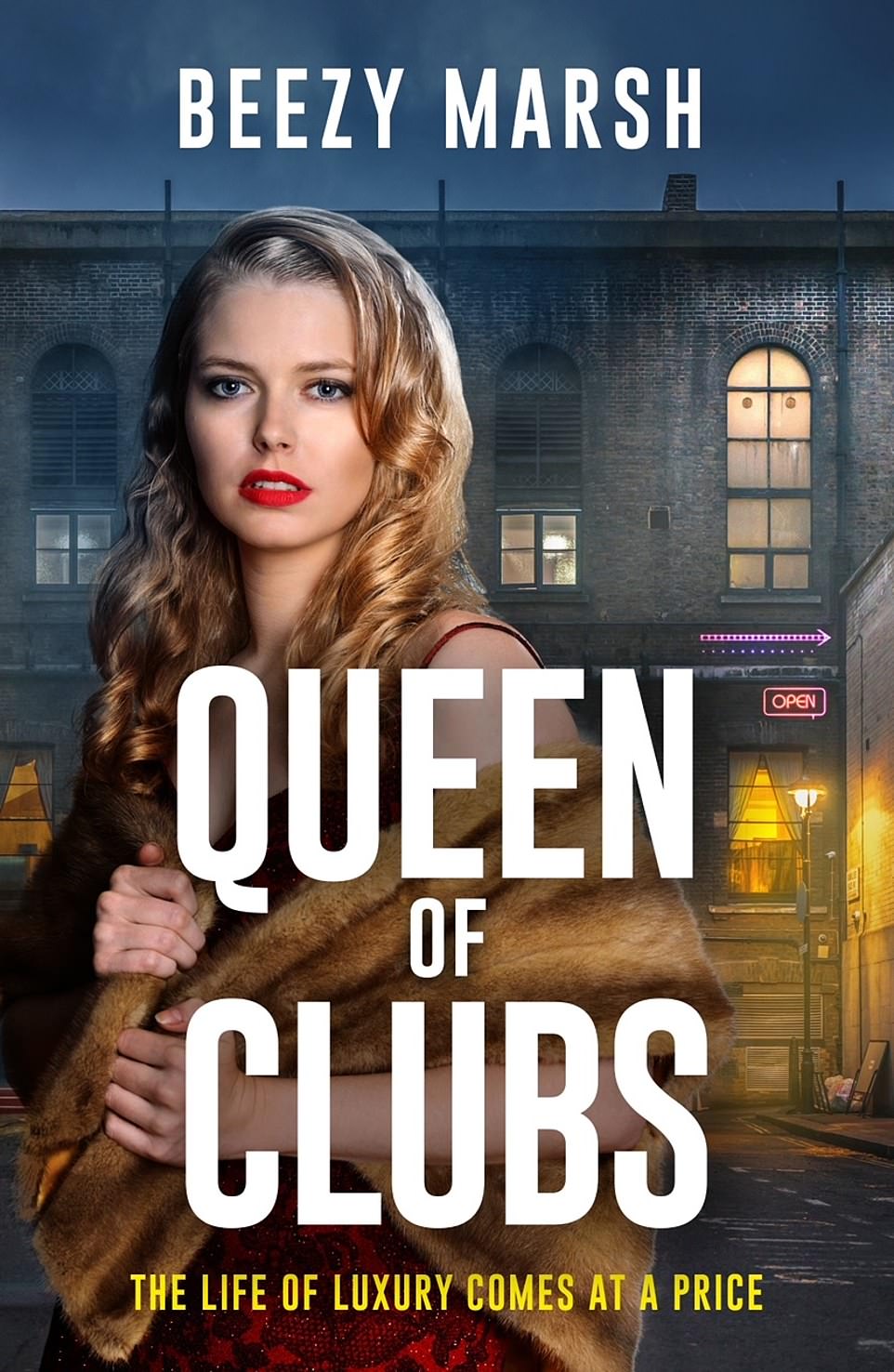 Queen of Clubs, by author Beezy Marsh, is published by Orion on October 6th