Kitten born with TWO FACES is purr-fect! Cat born in Thailand defies the odds to survive and now drinks milk from both mouths

By Ed Wight For Mailonline

A rare kitten born with two faces in northern Thailand is beginning to thrive after it defied odds it would die within a couple of hours of its  birth.

Born on Sunday in the county’s northern Lampang province, the kitten’s owner said it is now drinking milk from both its mouths.

He added that one side of the kitten has been named ‘Tung Ngern’ (bag of silver) and the other side is named ‘Tung Tong’ (bag of gold).

After seeing the two-year-old mum cat give birth to one kitten, owner Anuwat saw she was struggling with the second. 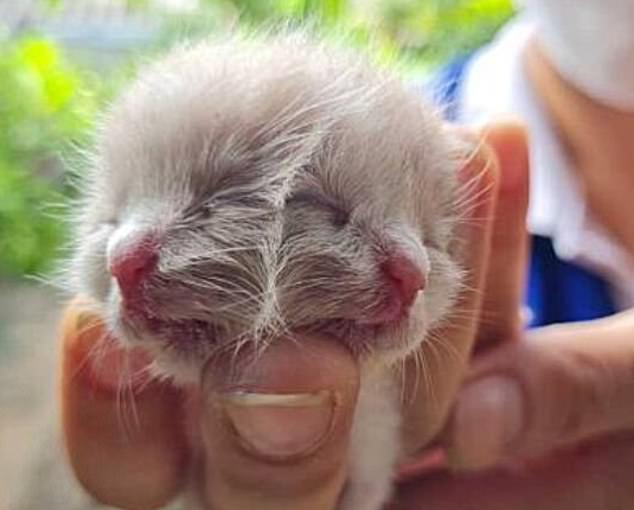 A rare kitten born with two faces in northern Thailand has defied all odds by surviving more than a couple of hours (Pictured: the kitten born on Sunday)

Taking her to a local animal hospital in Hang Chat where vets performed a Caesarian Section, the 29-year-old was stunned when they removed the two-faced kitten.

Two-faced kittens, which are known as Janus cats after the two-faced Roman god Janus, rarely live more than a day.

He later told local media he was convinced they were going to die.

But after seeing the kitten ‘fight for its life’ he said he spent the next two days caring for it.

He said: ‘I’ve hardly slept at all since it was born because it cannot hold its head up and needs constant attention. 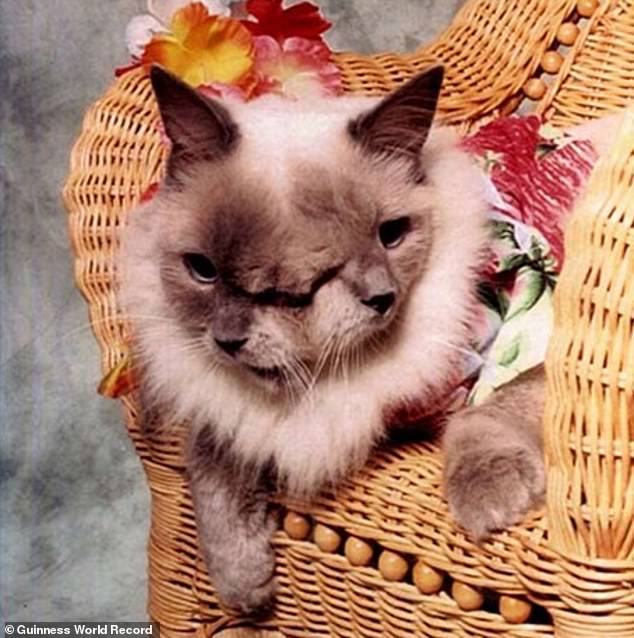 ‘It’s as much responsibility as having a human baby.’

He added: ‘I thought the brother was going to die. But it appears that the younger brother fought a lot for his life.

‘At first I thought I would give the kittens to someone who had taken care of such things before, because I have no experience.

‘But thinking about it, no one has ever taken care of a two-faced cat before.’

The two-faced, four-eyed, two-nosed, two-mouthed and two-eared kitten is now said to be doing well and happily lapping up milk.

Although Janus kittens rarely survive for more than one day, in 1999 a grey two-faced kitten named ‘Frank and Louie’ born in Massachusetts lived for an incredible 15 years.

In 2012, the cat made the Guinness Book of World Records as the longest surviving Janus cat.