Eleven Dubai restaurants were awarded the first Michelin stars in the Middle East on Tuesday as dozens of the city’s eateries made it into the prestigious gastronomic guide.

Two restaurants were given two-star ratings, another nine gained one star and 14 received the Bib Gourmand for value-for-money gourmet fare. 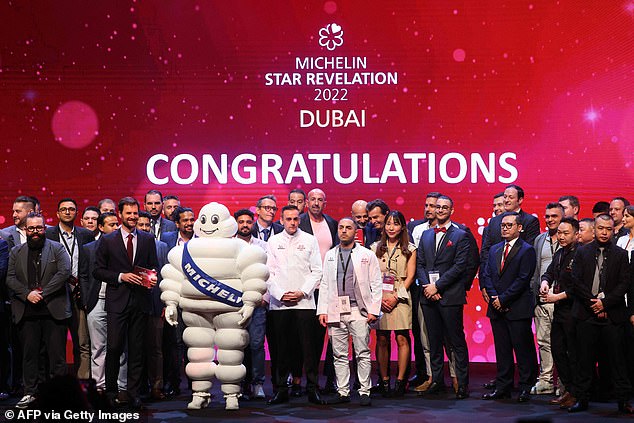 Chefs and owners pose for a picture on the stage during a ceremony revealing the 2022 selection of the Michelin Guide Dubai, the first-ever edition in the United Arab Emirates, on June 21

‘It’s a historic moment for Dubai and the Michelin guide,’ he told AFP.

Sixty-nine restaurants serving 21 types of cuisine have been listed, including Italian, Japanese, Arabic, French and Indian. 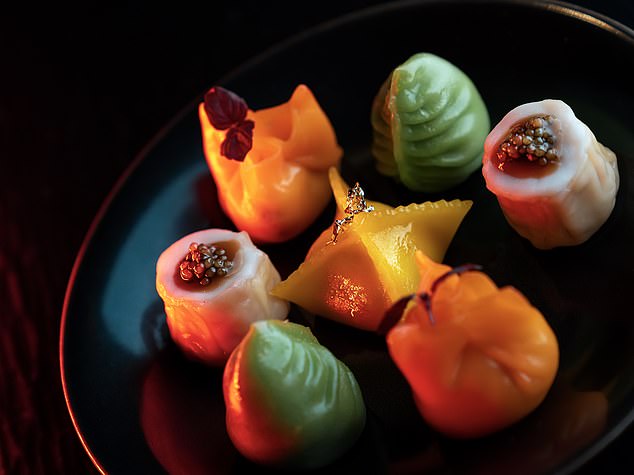 This picture shows a dim sum dish by newly Michelin-starred Hakkasan at the Atlantis, The Palm hotel

Il Ristorante – Niko Romito, at Bulgari Resort Dubai, and Stay by Yannick Alleno, which is on Dubai’s Palm development of man-made islands, were the two-star winners.

The Michelin Guide was impressed with the ‘balance, purity and clarity’ of the Italian fare at Il Ristorante – Niko Romito, which flies in ‘top-quality ingredients’ from Italy.

Stay by Yannick Alleno won plaudits for its ‘less-is-more approach’, resulting in ‘precise, sophisticated dishes that are skillfully crafted with French cooking as the base’.

One of the one-star recipients was 11 Woodfire by chef-owner Akmal Anuar, who ‘offers a global variety of vegetables, seafood and meats grilled to perfection over oak, hickory or hay’.

Joining him on the one-star podium was Al Muntaha at the Burj al Arab hotel, ‘offering refined French cuisine’; Armani Ristorante, ‘presenting precise Italian cooking’ at the Burj Khalifa; Hakkasan at the Atlantis, The Palm hotel, offering ‘reimagined Chinese dishes’; Ossiano, also at the Atlantis, The Palm hotel, next to the aquarium, described as ‘a world for creative fare’, and Tasca by Jose Avilliez in the Mandarin Oriental Hotel, serving up ‘vibrant, innovative’ Portuguese dishes. 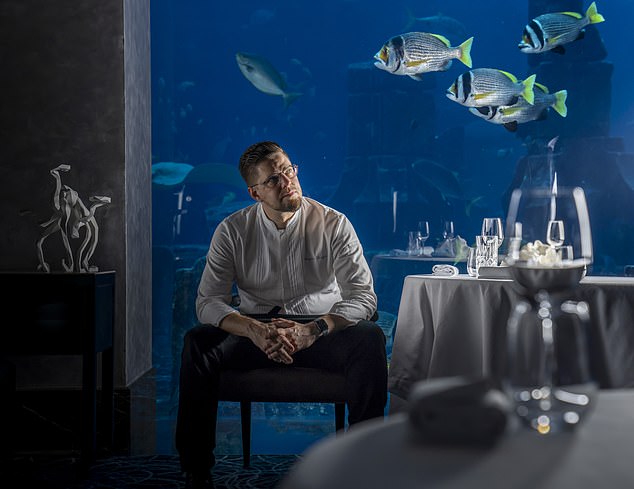 Gregoire Berger, Executive Chef at Ossiano, which is located by the aquarium at the Atlantis, The Palm hotel. The Michelin Guide has awarded his restaurant one star, commenting that it’s ‘a world for creative fare’

‘This, I believe, should be a game-changer,’ Firas Fawaz, founder and managing partner of featured restaurant The Artisan, told AFP.

‘You have the international standard… that pushes us to go the extra mile to deliver something different from the norm.’ 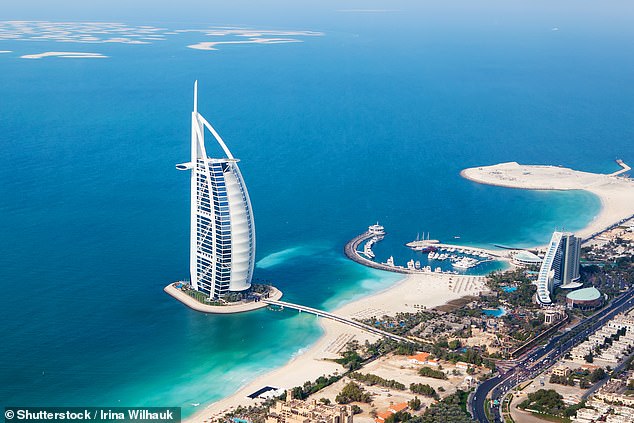 Al Muntaha restaurant at the Burj al Arab hotel, pictured, now has a Michelin star for its ‘refined French cuisine’

Executive Chef Gregoire Berger, Ossiano, commented: ‘We have been waiting for this for such a long time. It’s a great achievement and testament to the team’s relentless hard work. We look forward to the next year. We tweak what has to be tweaked, and we will continue to raise the bar to drive Ossiano forward as one of the world’s leading restaurants.’

Executive Chef, Andy Toh, Hakkasan, commented: ‘It’s truly exciting to win a Michelin star for Hakkasan Dubai. We join Hakkasan Mayfair and Hakkasan Hanway Place as the third one-star restaurant in the Hakkasan family, and this is testament to the support of both Atlantis and Tao Group Hospitality in continuing to drive the brand forward, securing the best talent and the freshest produce to ensure we make our mark.’

Created in 1900 by the brothers Andre and Edouard Michelin of tyre company Michelin for motorists, the guide has become a reference for food lovers and has been known to make or break careers.

Poullenec said Dubai’s 90 per cent expat population, of 200 nationalities, had created an ‘epicurean kaleidoscope’ in the desert city.

Dubai’s inclusion is a recognition of the different nationalities ‘bringing their experience, their background and culture into every single bite’, Issam Kazem, CEO of Dubai’s Department of Tourism and Commerce, told AFP.

YUM’S THE WORD: THE DUBAI RESTAURANTS HONOURED BY THE MICHELIN GUIDE