Max George has been seen for the first time since the tragic death of his bandmate Tom Parker, as he joined a slew of stars training for new ITV series The Games on Tuesday.

The Wanted star, 33, cut a sombre figure as he ran multiple laps around a race track, after Tom passed away last week following a two-year battle with brain cancer.

On Saturday Max paid tribute to his longtime friend Tom in a touching social media post, writing that he was ‘heartbroken’ and that there was a ‘huge hole left in his life’. 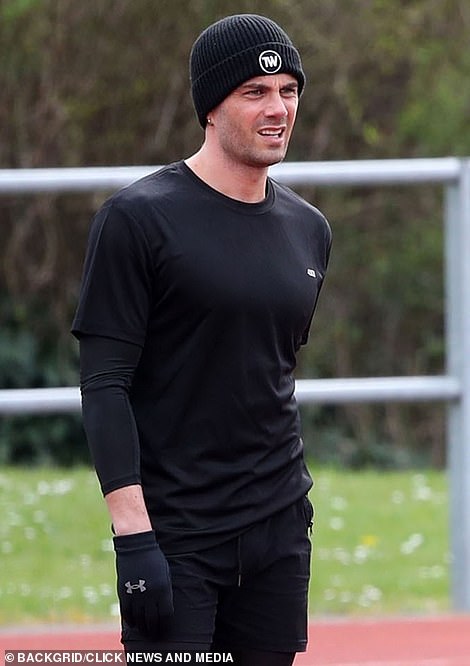 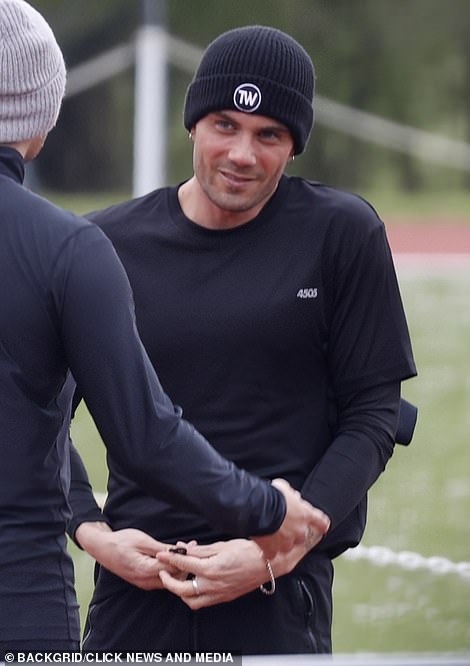 EXCLUSIVE: Max George has been seen for the first time since the tragic death of his bandmate Tom Parker, as he joined a slew of stars training for new ITV series The Games on Tuesday

Dressed in black sportswear, Max displayed his impressive fitness skills as he raced his co-stars including Ryan Thomas around the track.

The singer was seen chatting to Ryan as they prepared to begin their practice race, with the series expected to air on ITV later this year.

Joining him on the tracks were fellow contestants Christine McGuinness and Olivia Attwood, who displayed their own toned physiques in tight sports leggings and crop tops. 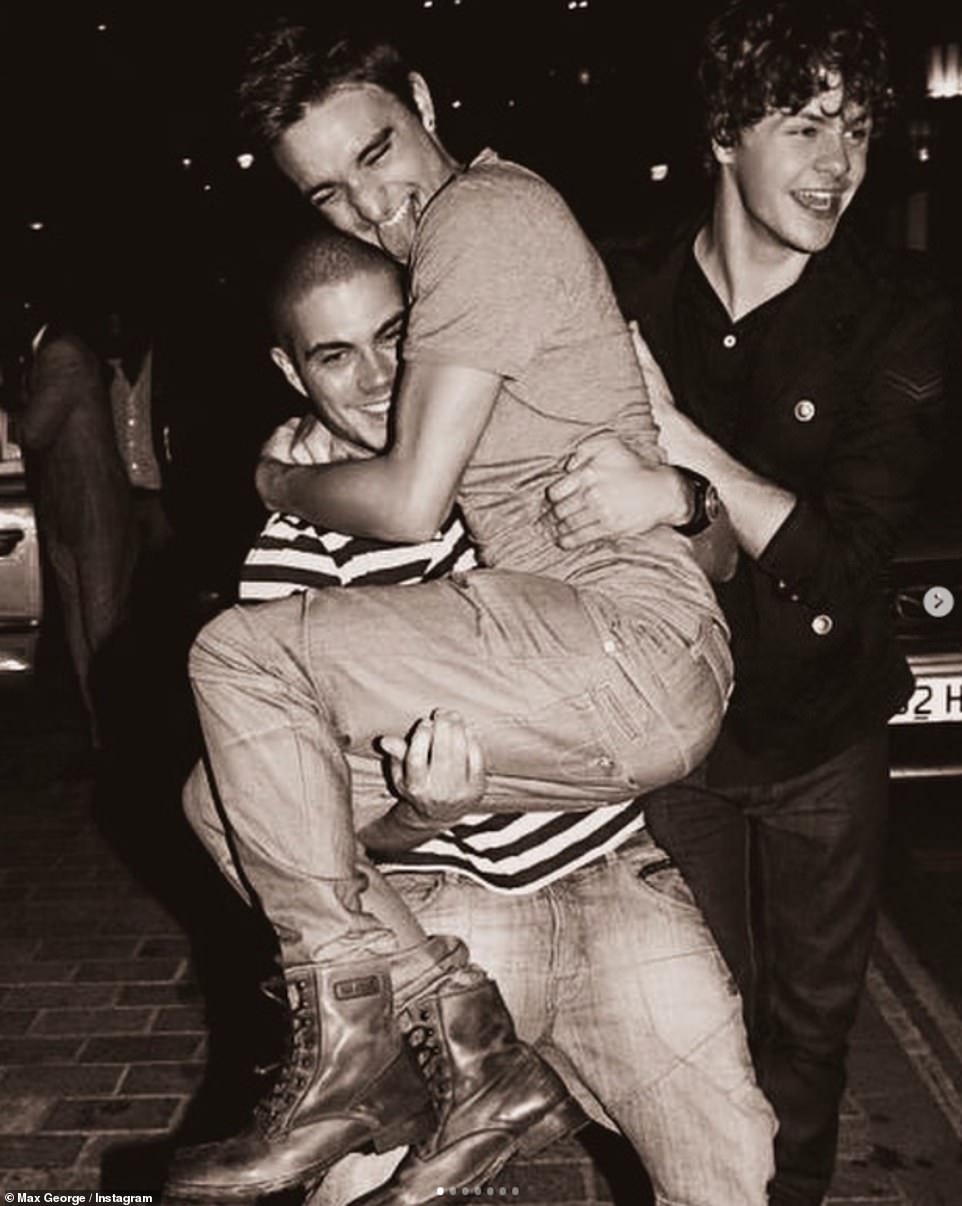 Devastating: On Saturday Max paid tribute to his longtime friend Tom in a touching social media post, writing that he was ‘heartbroken’ and that there was a ‘huge hole left in his life’ 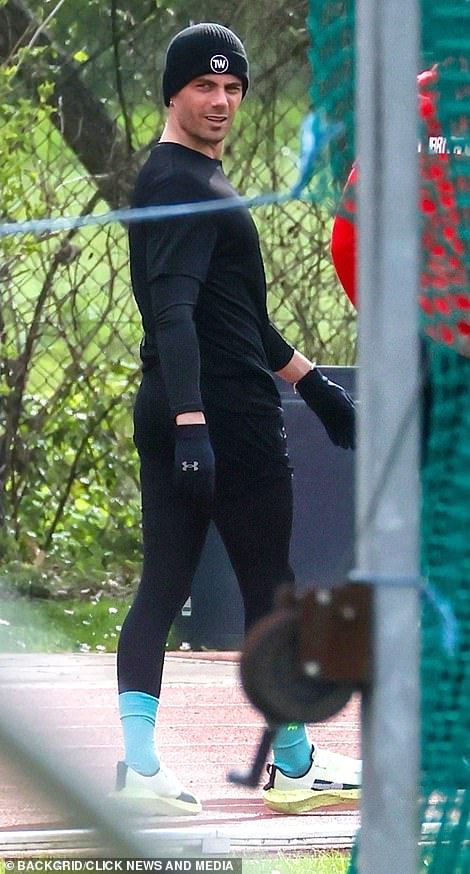 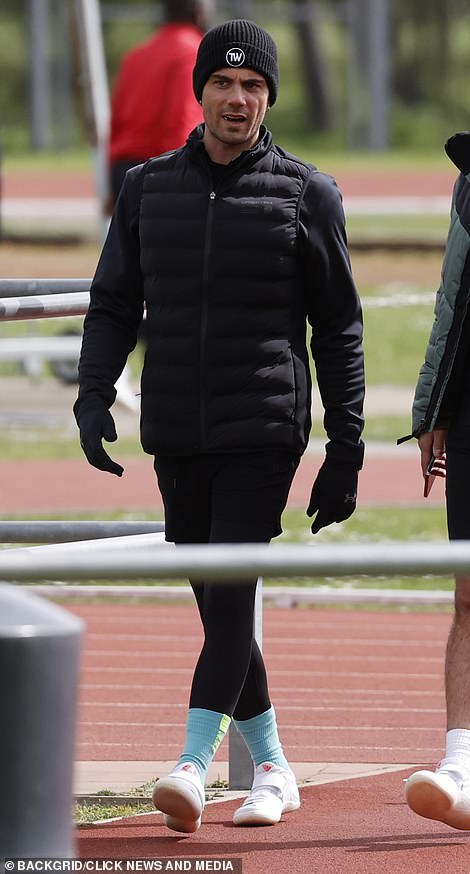 Athlete in the making! Dressed in black sportswear, Max displayed his impressive fitness skills as he raced his co-stars including Ryan Thomas around the track 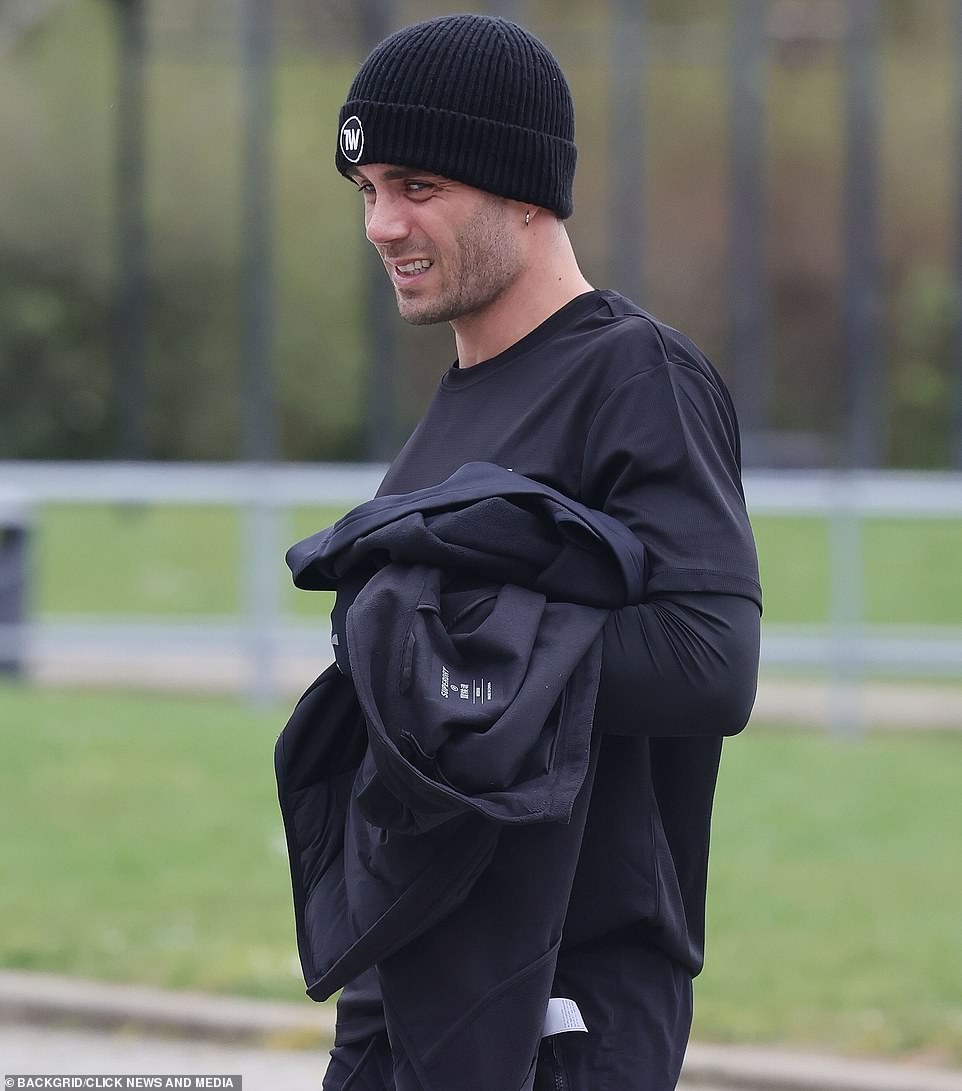 Keeping warm: The star wrapped up in a black beanie hat during his first public appearance since Tom’s death

The stars attempted to practice sports including the javelin, as they were seen hurling poles across the field.

On Saturday Max shared a heart-breaking tribute to his close friend Tom after he passed away following his battle with brain cancer.

Tom was diagnosed with stage 4 glioblastoma in October 2020, and given just 12 months to live by doctors. His wife Kelsey announced the news that he had passed away on Wednesday.

Tom formed The Wanted with Max as well as Siva Kaneswaran, Jay McGuiness, and Nathan Sykes.

Max penned in his tribute alongside snaps of them together: ‘Tom, my brother, my boy, my band mate, my best bud. You lit up so many lives all over the world but I can only speak on behalf of mine.

‘From the minute I met you, I knew this was gonna be a special chapter in my life. I was right. We did everything together, some amazing things, some outrageous things. Im so proud of what we achieved as band mates and as brothers.

‘I’m also proud that I was there the night you met Kels. I remember saying to you, ‘you like her don’t you?’.. to which you replied, ‘bro, like you wouldn’t believe’. You two really are like peas and carrots.

‘Thank you for choosing me as your friend. It was an honour from day one. I’m so grateful I was with you until the very end. The courage and dignity I have witnessed over the last few months surpassed the lion I already knew you were.

‘The huge hole now left in my life will forever be there, but I know your spirit will live on through your two beautiful babies, your wonderful wife, our music, your fans and in my heart.

‘I’m heartbroken beyond words right now and I cannot even begin to imagine what the future holds without you, but whatever I do going forward, even on my darkest days, I can always smile and say, ‘I shared the stage with Tom Parker’.

‘I am going to miss you so much. I love you mate. Always. George.’

The tragic news of Tom’s death was confirmed by his wife Kelsey who he leaves behind along with their two children, Aurelia and Bodhi.

Kelsey said: ‘It is with the heaviest of hearts that we confirm Tom passed away peacefully earlier today with all of his family by his side.

‘Our hearts are broken. Tom was the centre of our world and we can’t imagine life without his infectious smile and energetic presence.

‘We are truly thankful for the outpouring of love and support and ask that we all unite to ensure Tom’s light continues to shine for his beautiful children.’

She went on to thank everyone who has cared for Tom during his illness, adding that he fought the disease until the very end.

Following his death, Kelsey shared that she had set up a fundraiser in Tom’s memory, which so far has raised £44,000 for multiple causes.

Just last month, Tom announced he had written a book, Hope: My Inspirational Journey, about ‘carrying on against all odds’. It will be published in July.

After his death was announced the band posted a joint tribute to the star, while on Thursday, Siva shared his own message.

Siva posted a video of The Wanted bandmates hugging on stage with the caption ‘we’ll always be there for you brother,’ 24 hours after Tom passed away with his bandmates by his side.

Siva used the band’s 2011 single Gold Forever on the video. The track has now reached number one on iTunes UK in the day since Parker’s death following a campaign from fans.

The video showed Siva and his bandmates embracing Tom on stage during The Wanted charity gig last year, with Siva writing in the caption:

‘Always & Forever ❤️ Our Tommy boy. Say my name like it’s the last time, Live today like its your last night, We want to cry but we know its alright, Cause I’m with you and your with me’.

Last week fan footage, which has resurfaced following Tom’s death, showed how the singer was supported by his bandmates when he was too weak to sing during his final performance with The Wanted.

As part of the Most Wanted: The Greatest Hits tour, Tom joined his bandmates on stage at Liverpool’s M&S Bank Arena on March 17 – just two weeks before he died.

Fan videos taken on the night show the ailing star sitting on a throne during the songs Gold Forever and Glad You Came.

Siva took over Tom’s vocals on Gold Forever while Nathan Sykes remained by his side, before Max George and Jay McGuinness joined him for the second song.

The band wore sunglasses in solidarity with Tom, who chose to wear shades in public during his final appearances after his eye was forced shut due to his brain tumor.

Tom’s wife Kelsey was in the audience for the gig, proudly sharing footage at the time of herself dancing with the couple’s two young children while Tom was on stage.

While battling through chemotherapy and treatment Tom campaigned tirelessly to raise awareness of his cancer in the hopes of helping others.

In September 2021, 11 months on from his diagnosis, Tom sang at the Stand Up 2 Cancer show at the Royal Albert Hall and even embarked on a Greatest Hits tour with his bandmates when the tumour was confirmed as ‘stable’ in November.

But Tom’s condition deteriorated rapidly once the tour came to an end earlier this year. 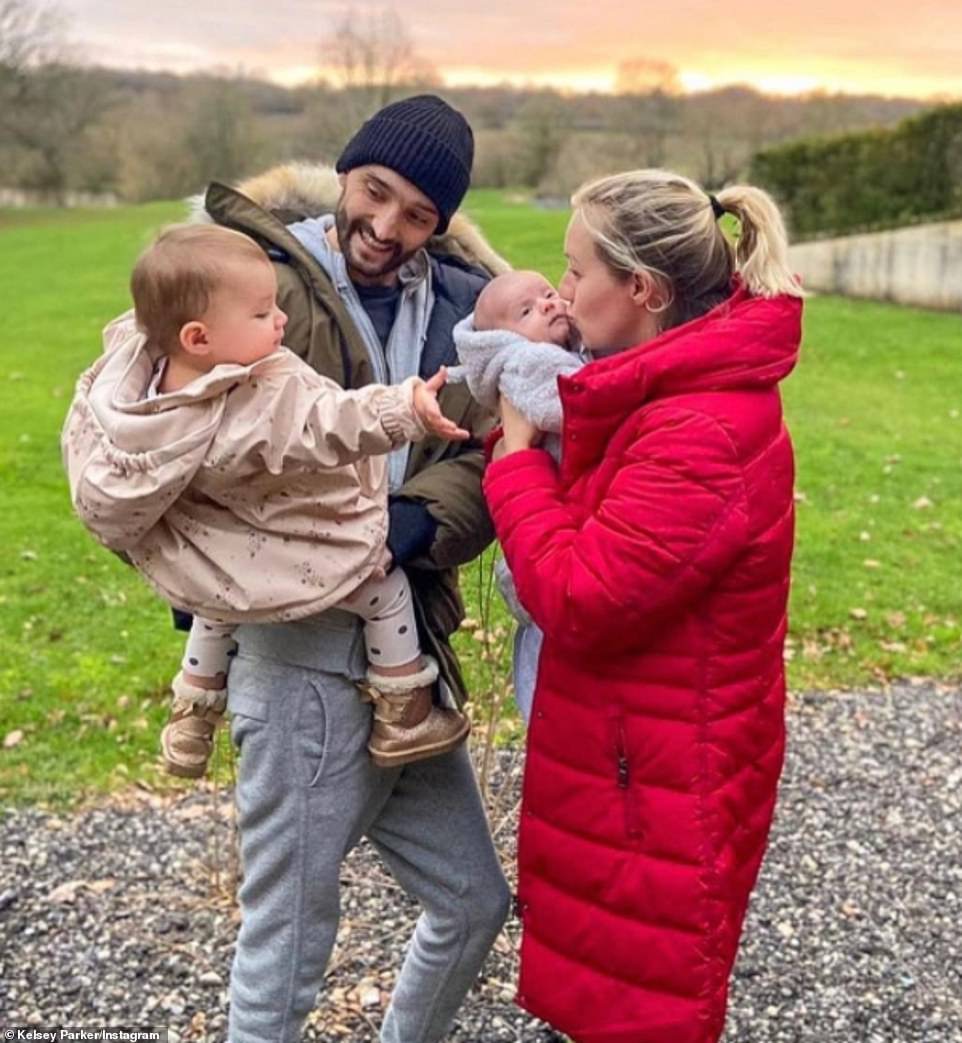 Sad news: Tragic news of Tom’s death was confirmed by his wife Kelsey after he battled a brain tumour for two years