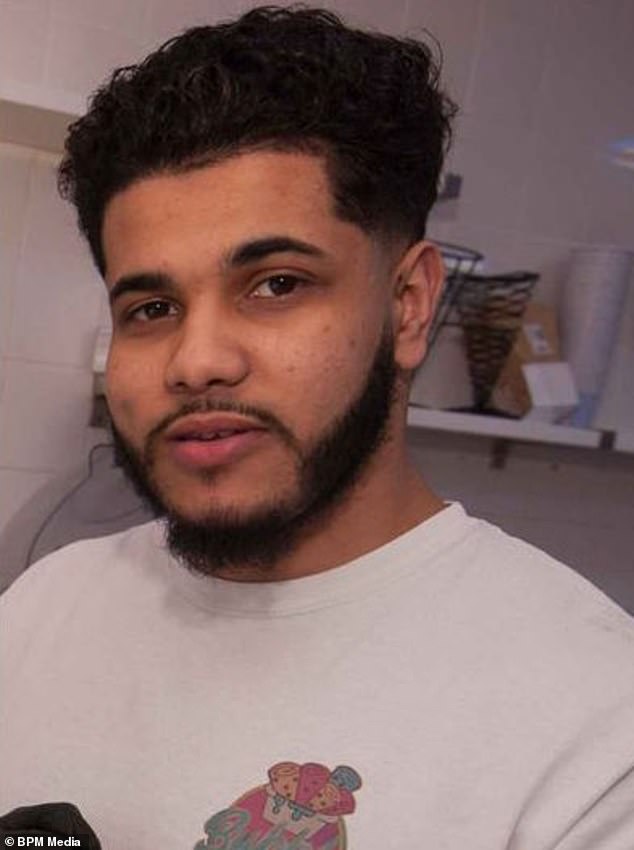 Five men are facing life in jail after being convicted of the drive-by murder of a shop owner who was gunned down on a quad bike as he left a barbecue.

Abdul Rahman Abubaker, 24, suffered catastrophic injuries after being blasted with a shotgun and died hours later in hospital.

The dessert shop boss was riding a quad bike away from a party to mark the start of Ramadan in Stratford Place in the Highgate area of Birmingham in May 2018.

A court heard three cars in a convoy had pulled up shortly beforehand and the fatal gunshot was fired from one of the vehicles.

Within 72 hours two of the cars had been set alight and destroyed to try and destroy evidence, while the third had disappeared without trace.

Abdul Rahman Abubaker, 24, suffered catastrophic injuries after being blasted with a shotgun in Stratford Place in the Highgate area of Birmingham in May 2018 and died hours later in hospital

Elmi was tracked down in Glasgow while Yusuf was arrested at a London airport after coming back from Sweden where he’d fled less than a month after the murder.

The other three were detained in Birmingham.

By reviewing footage from more than 100 CCTV cameras, detectives established four cars – of which three were stolen – had initially met in Hams Road Alum Rock, Birmingham.

One car was abandoned but another, a VW Passat, was sent out on several trips to scour the area near the barbecue.

A stolen Ford Kuga – part of the convoy from which the fatal shot was fired – was taken back to Hams Road and set alight within six minutes of the shooting.

A taxi was ordered to pick up a group further down the road shortly afterwards.

An examination of the Kuga found shotgun cartridges and the remnants of a fuel container in the scorched shell.

Another vehicle in the convoy – an Audi A3 – was discovered in Arley Road, Alum Rock, after being set alight three days after the killing.

Daahir’s sock was found in the car and he, along with Yusuf admitted arson ahead of the trial.

Police traced their movements, including Daahir and Yusuf being within a vehicle which was in the convoy that evening and Elmi and Omar being in Hams Road.

All denied murder but were convicted following the trial at Birmingham Crown Court.

They will be sentenced at a later date.

Superintendent Edward Foster, of West Midlands Police, said: ‘This has been a complex investigation during which Abdul, along with his family and friends, have been at the forefront of our minds.

‘We will never probably never know the reason behind this tragic killing and who actually fired the fatal shot.

‘Undoubtedly, there were others who were part of this horrific attack but whose identities remain unknown.

‘But it’s clear this was the culmination of careful planning which involved all five of these men who have been convicted today.

‘They helped destroy or conceal cars while two fled the country in their attempt to avoid being caught.

‘However, due to the diligence, dedication and expertise of our officers and staff we ensured this wasn’t the case.

‘Each of them played a role in causing, or assisting, the tragic murder of Abdul and they will now rightly spend considerable time behind bars.’