A 66-year-old woman has been jailed five years after she and her family faked a neurological condition for 11 years to scam a local council out of more than £624,000.

Frances Noble pretended that she was bedbound and unable to feed herself, needing round-the-clock care, between 15 January 2007 and 26 November 2018.

From 2005 she received £702,905 from the council, but the offence she admitted only came into existence in January 2007, and so she was only charged over the money received from 2007 onwards.

During this 11-year period, she received £624,047.50 from Hertfordshire County Council.

Sentencing Noble, Judge Richard Foster said it was possibly the largest fraud of its type to come before the English courts.

Prosecutor Andrew Johnson told St Albans Crown Court that Noble forged emails claiming to have been written by the carers she had ‘hired’ to look after her at her home in Damask Green Road in Weston, near Hitchin, north Herfordshire. 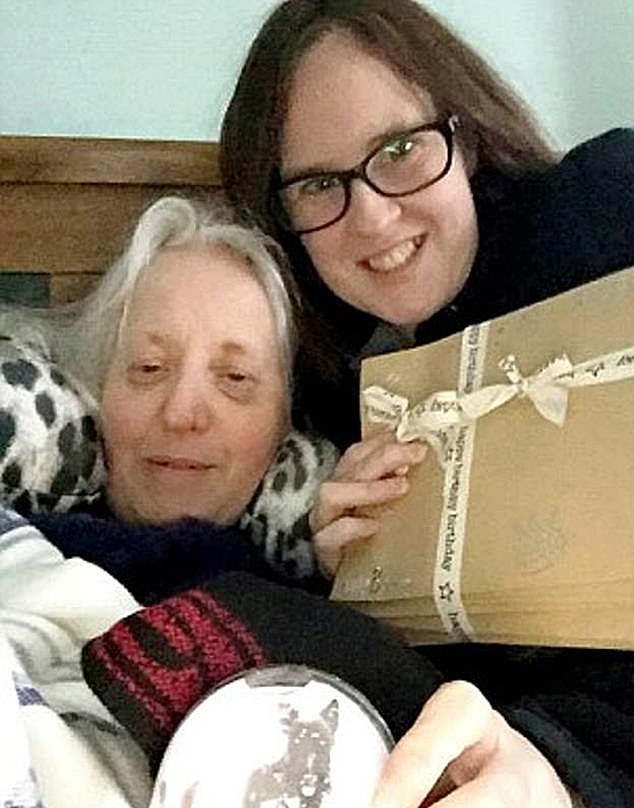 Frances Noble, 66, has been jailed five years after she and her family faked a neurological condition for 11 years to scam Hertfordshire County Council out of more than £624,000 over 11 years. Pictured left, with her daughter, Laura Borrell, who has also been found guilty of scamming the council 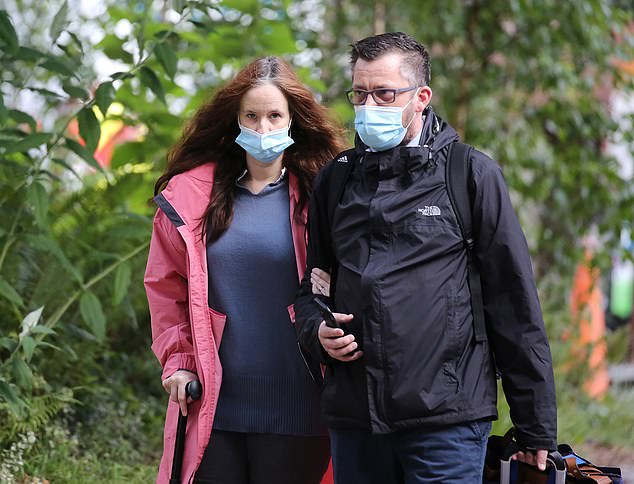 Daughter Laura Borrell, 44, and son-in-law Phillip Borrell, 46, were both employed as carers by Frances Noble

He said the care payments from the council were made directly into a bank account under Noble’s control, to give her a ‘sense of autonomy’.

Tens of thousands of pounds of the care package money from Hertfordshire County Council was passed onto her daughter and son-in-law who went on luxury North American holidays in Canada, San Francisco, Boston and Orlando.

At different times she ’employed’ her daughter, Laura Borrell, 44, and son-in-law, Philip Borrell, 46, as her carers.

Noble of Damask Green Road, Weston, Herts who had been living in Berlin since 2019, did not appear for her sentencing hearing having earlier pleaded guilty to fraud by false representation.

She had moved to Germany with her daughter and son-in-law after the investigation began. A warrant will be issued for her arrest and extradition.

The 66-year-old was sentenced 4 years 9 months in prison.

Laura Borrell and Philip Borrell, both 45, also of Damask Green Road, Weston have each pleaded guilty to money laundering.

Between 2005 and 2018, Noble convinced the council that her condition was so series that she required intensive round the clock home care at her bungalow in Datchworth near Stevenage.

But she was seen by her neighbours walking her dog Bertie early in the morning and videoed by one as she walked around her back garden. Investigators watched as took a Tesco home delivery which she was able to unpack.

At an earlier hearing, Noble, of Rohrwallallee, Berlin, Germany, and Philip and Laura Borrell, of no fixed address, admitted one count of fraud.

The pair also admitted one further count each of acquiring criminal property, in the sum of £39,700 for Laura Borrell and £6,218.92 for Philip Borrell. 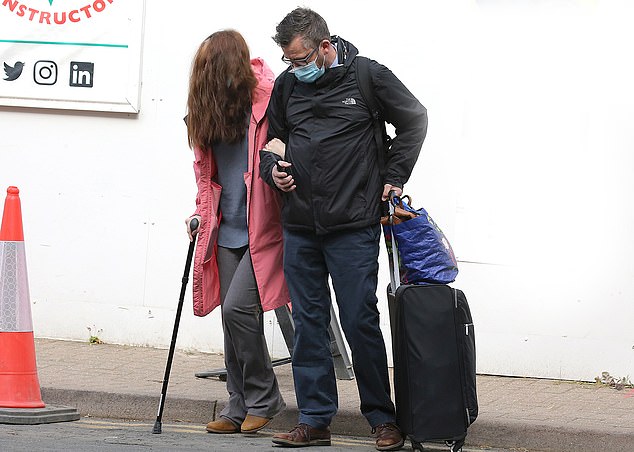 Laura and Phillip Borrell arrived at St Albans Crown Court. They admitted to accepting £45,918 between them

He added that the offending was not just that the money was spent in an ‘impermissible way’ but that it was ‘also obtained through lies’.

The fraud was rumbled when neighbours became suspicious that Noble was mobile, seeing her standing up in the garden and walking her dog at night.

Mr Johnson said that a neighbour had seen Noble in her garden in 2015.

‘She said the strangest thing then happened – (Noble) took hold of her hood and pulled it across her head and said ‘I am not Frances, I am her carer’,’ the prosecutor told the court.

Another neighbour secretly recorded a series of videos of Noble walking around her garden, without the aid of a carer.

In spring 2018, the council opened an investigation into Noble. Her house was put under surveillance over a period of five days, and no evidence of visits by carers was seen. 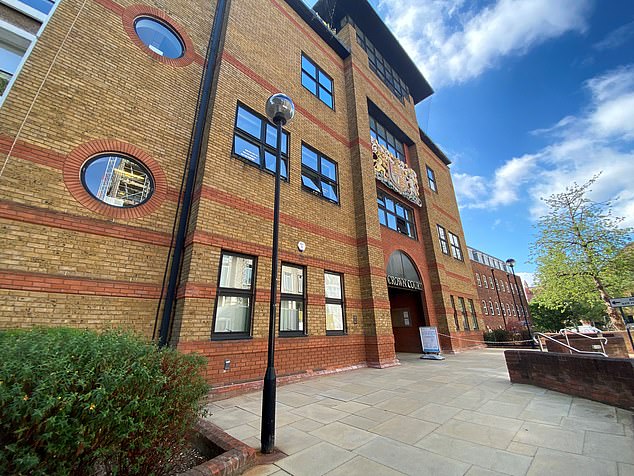 During this 11-year period, she received £624,047.50 from Hertfordshire County Council (pictured). Sentencing Noble, Judge Richard Foster said it was possibly the largest fraud of its type to come before the English courts

The trio were then charged with fraud, but Mr Johnson said that ‘at some point’ Noble moved abroad.

‘We know that at some point she travelled to Germany,’ Mr Johnson.

‘There is no evidence at all as to what, if any, arrangements are taking place as to how she is being treated in Germany.’

While Noble entered a guilty plea from Germany, she did not attend her sentencing, and the court was told that she remains in Berlin.

A hearing to apply for a bench warrant for her arrest in Germany will take place at a later date.

One another occasion when Noble was spotted doing things she would not have been able to, if her neurological condition was real, a care worker turned up at her home to find her standing up, naked in the bathroom, washing her hair.

The money Noble received went into a single bank account, that should solely be for the purpose of direct payment to carers. On the most generous definition less that £100,000 was spent on care, said Mr Johnson.

He said: ‘Funds that were paid to her were funds that would have been used to support the residents of Hertfordshire.’

Noble had ‘dishonestly and deliberately’ lied to social workers.

Mr Johnson said: ‘The central lie was the suggestion that she was bed-bound for a very significant period.

‘But it is quite plain, she was simply not bed-bound. She misled the local and many others, including her treating doctor.

‘She claimed a variety of people were carers when they did nothing.. She sent a number of emails from carers. Those emails had nothing to do with them (the carers) they were fake emails.

‘She spun a web of lies to everyone she came into contact.’

One social worker said it was unusual person who had been bed ridden for many years not to have deteriorated despite her inability to move.

When neighbours reported her, Noble claimed to her Housing Association and the police that she had been the victim of harassment and hate crimes. She even persuaded the Housing Association to raise the height of her fence to prevent her being caught out again.

The investigators also found a video she made inside her home in June 2013. She was walking around and filmed herself in a mirror.

The Borrells themselves made headline when they appeared on ITV’s This Morning programme where Laura, then aged 39, told Philip Scofield and Holly Willoughby claimed she was one of the youngest people ever to be diagnosed with dementia.

Ben Newton, defending Noble, said: ‘She had genuine and serious health issues.’ He said Noble had been diagnosed with depression since 1999 and a history of mental health issues.

He said she had no previous convictions and there was no suggestion the money funded a lavish lifestyle. ‘She was not going on expensive foreign holidays and buying luxury items,’ he said.

Jailing her, Judge Richard Foster said: ‘This is possibly the largest fraud of its type to come before the English courts.

‘The cost of social care is an enormous burden on the tax payer.’ He said taxpayers were the victims of her fraud.

The judge, who bailed the Borrells, said they must prepared themselves for immediate prison sentences. He said almost a third of the money had gone to her daughter and son-in-law and £184,000 into Noble’s personal bank account.

The judge said: ‘You made believe you were bed-bound. You spun a web of lies and deceit including sending emails purporting to be from carers’.

A proceeds of crime hearing will be at a later date.