After wrapping up the international friendly encounters during the break for countries by FIFA, Super Eagles boss Gernot Rohr is already looking forward to the upcoming qualifiers for the 2020 Africa Cup of Nations (AFCON) in November.

The Super Eagles of Nigeria lost 0-1 to African champions the Les Verts of Algeria and were held to a 1-1 draw by the Carthage Eagles of Tunisia in the other friendly encounter.

Speaking upon the conclusion of both games, Rohr stated that his team was missing some key players but s confident that they will be ready in November.

He also stated that some of the new players invited to the team impressed which should make his selection process difficult.

Rohr said, “We are happy to have had this opportunity to be camped in Austria for 10 days. It was a very good feeling to be together again after being away for 11 months, although we missed some key players.”

“We have some positives to pick out from the games because inspite of missing some key players we still competed well. Now it is going to be difficult for me to pick our list for the AFCON qualifiers next month because of the new boys who did well.”

“I believe these very good friendly games will help us to return to winning ways when we play Sierra Leone next month(home and away). Good results next month may see us qualifying for the 2022 AFCON already.” 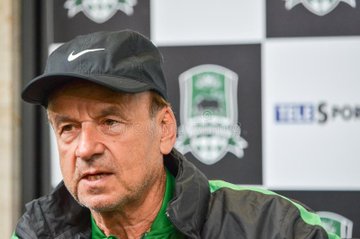