The January 6 House select committee shared outtakes of an address former President Donald Trump made to the nation on January 7, still unable to publicly say he lost the election.

The former commander-in-chief is shown getting tongue-tied.

‘Yesterday is a hard word for me,’ he says at one point, with daughter Ivanka Trump heard outside the frame recommending he remove it.

He also struggles to read the teleprompter.

‘I can’t see it very well,’ he complains.

He straightens his suit jacket and eventually makes this three-minute address.

‘My only goal was to ensure the integrity of the vote,’ he tells the camera.

The outtakes were part of new exhibits shared with the public by the Democrat-led House select committee on January 6, which held its final hearing of the summer in primetime Thursday night. 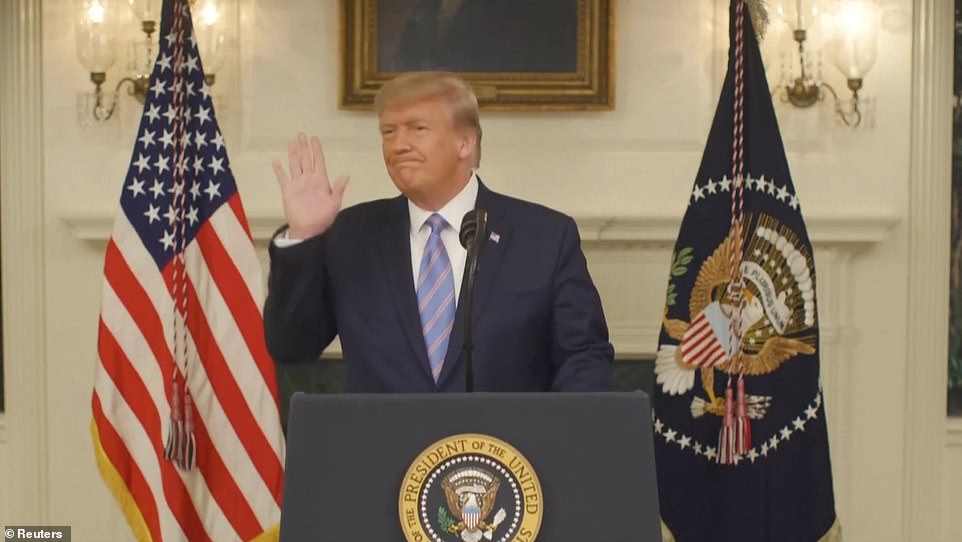 Former President Donald Trump is seen in outtakes of an address he made on January 7, 2021, condemning the January 6 attack on the U.S. Capitol Building by his supporters 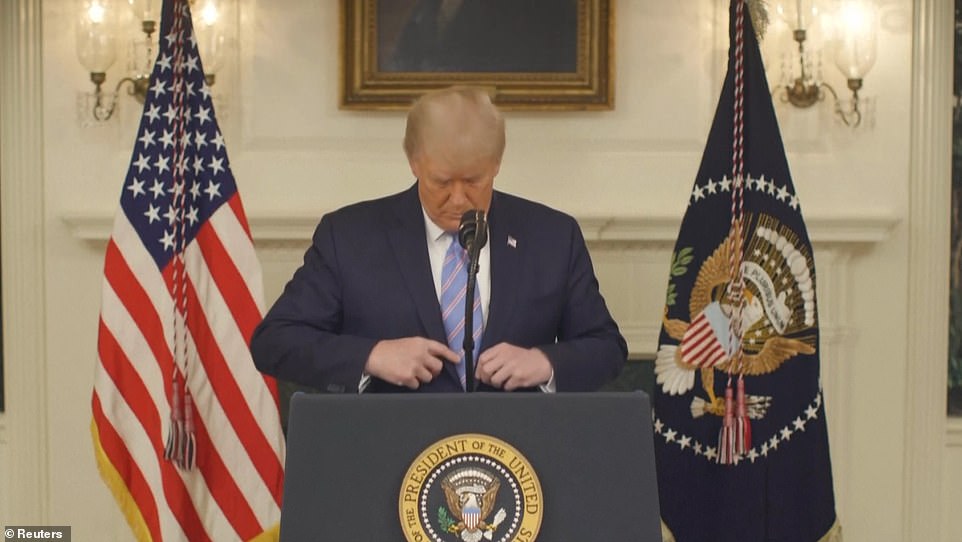 He straightens his jacket in one clip, while in another has trouble reading the teleprompter. He’s heard telling Ivanka Trump that he has trouble with the word ‘yesterday’ 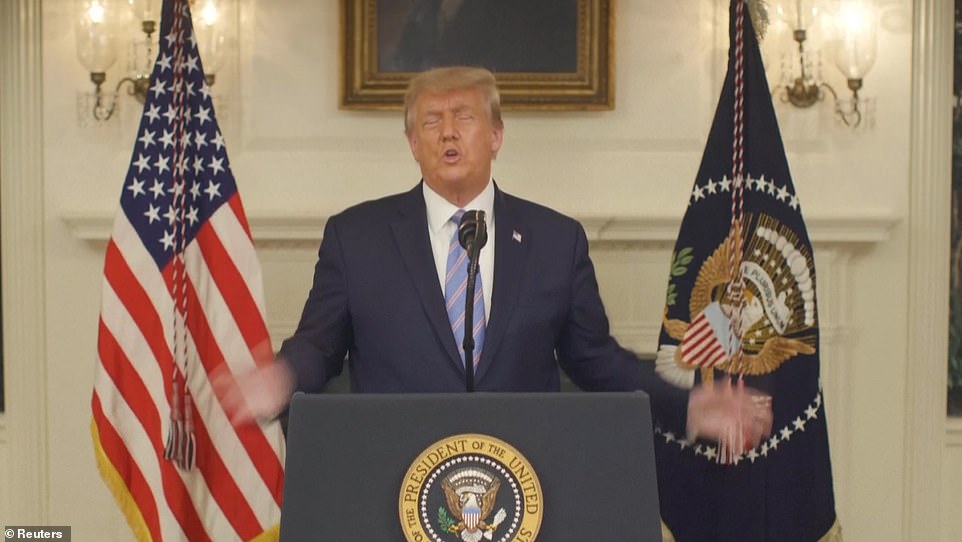 The committee also showed an image of Trump standing in the Oval Office after the Ellipse rally on January 6 – before moving into the White House dining room where he would spend hours refusing to call off the attack.

Thursday night’s primetime hearing was dedicated to the 187 minutes between Trump wrapping up his remarks on the Ellipse – where he goaded supporters to match on the Capitol – until his tepid video statement asking them to go home.

Committee members noted how there were no photos of Trump as he sat watching Fox News Channel in the White House dining room for more than three hours, nor were there entries on an official call log of White House diary.

What witnesses did tell committee members was that White House officials, including Ivanka Trump and Counsel Pat Cipollone, urged the president to make a statement to supporters to stop the attack.

Inside the Capitol, members of Vice President Mike Pence’s security detail were so worried about the escalating violence that they were making ‘personal call’s to ‘say goodbye’ to their families because they ‘feared for their lives,’ according to an unnamed official whose identity the committee kept secret. 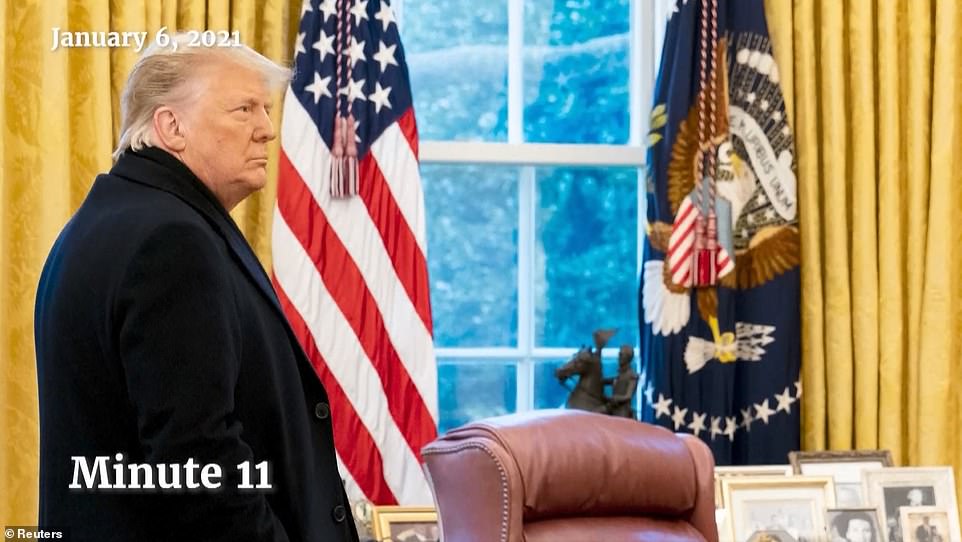 The January 6 committee showed an image of former President Donald Trump standing in the Oval Office after the Ellipse rally on January 6 – before he moved into the White House dining room for three-plus hours while supporters ransacked the U.S. Capitol 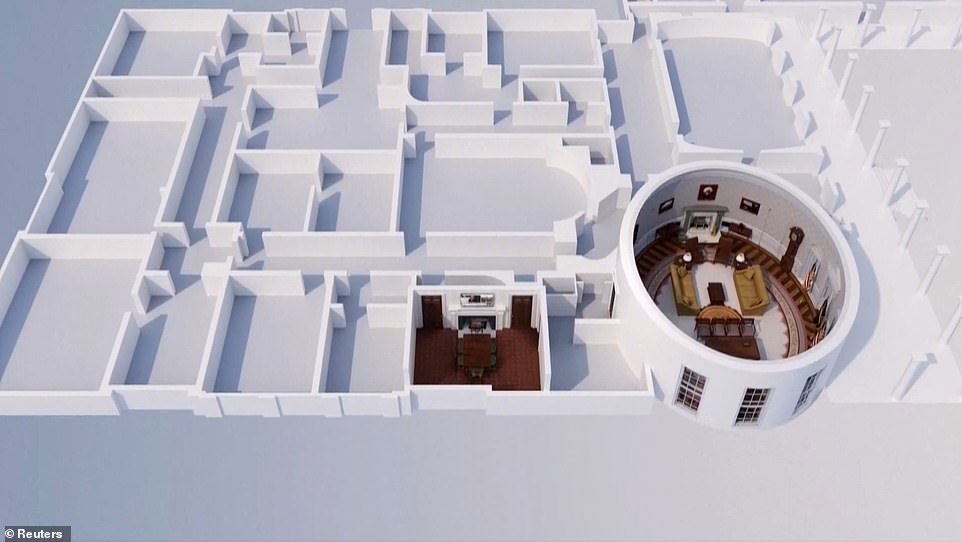 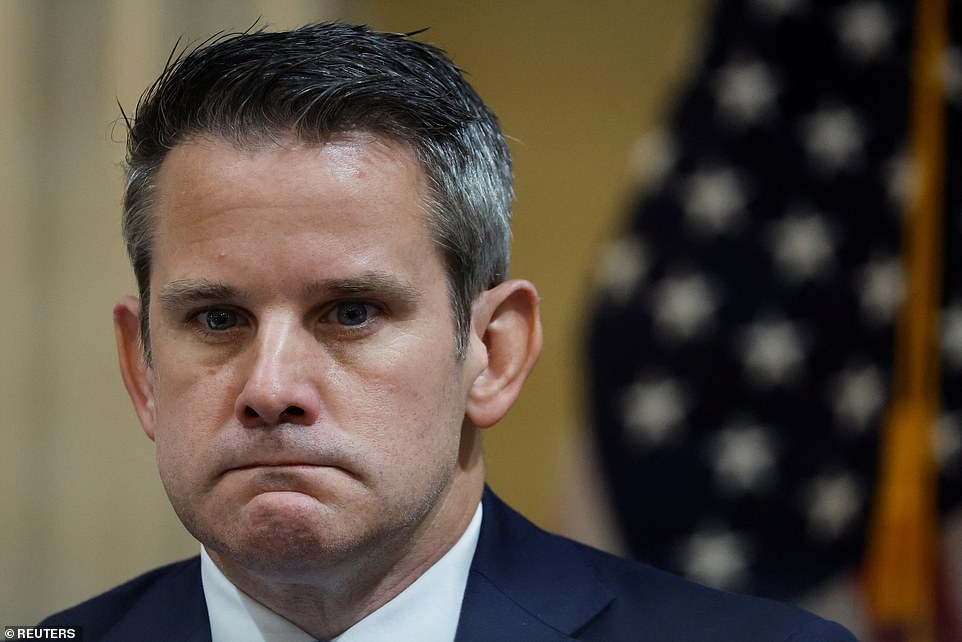 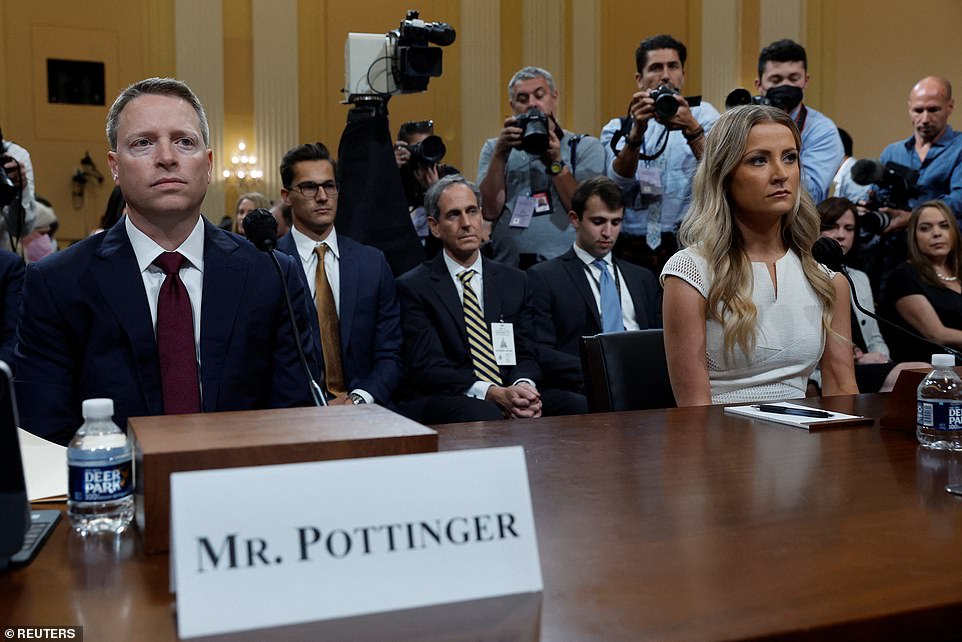 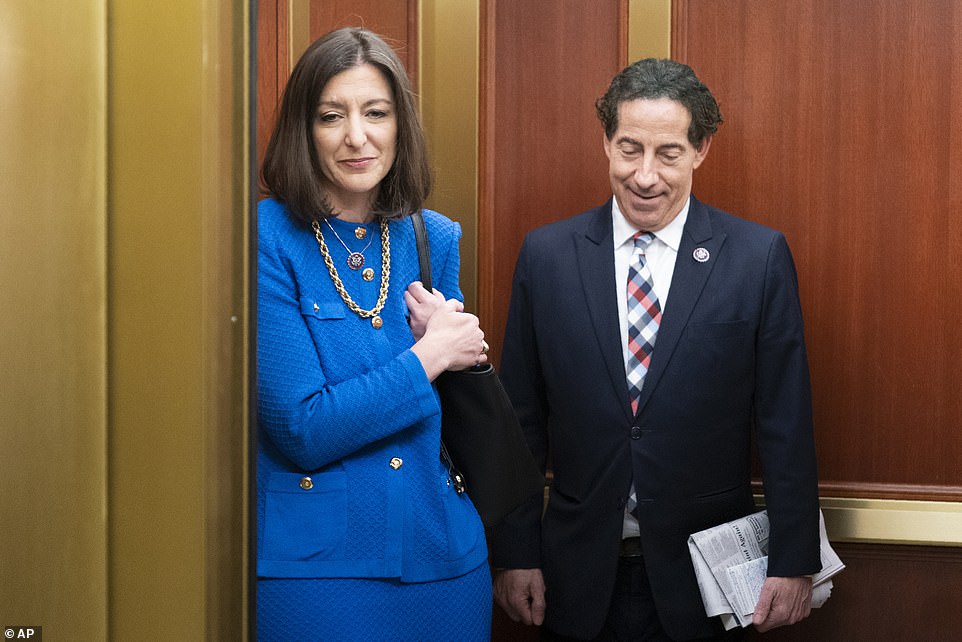 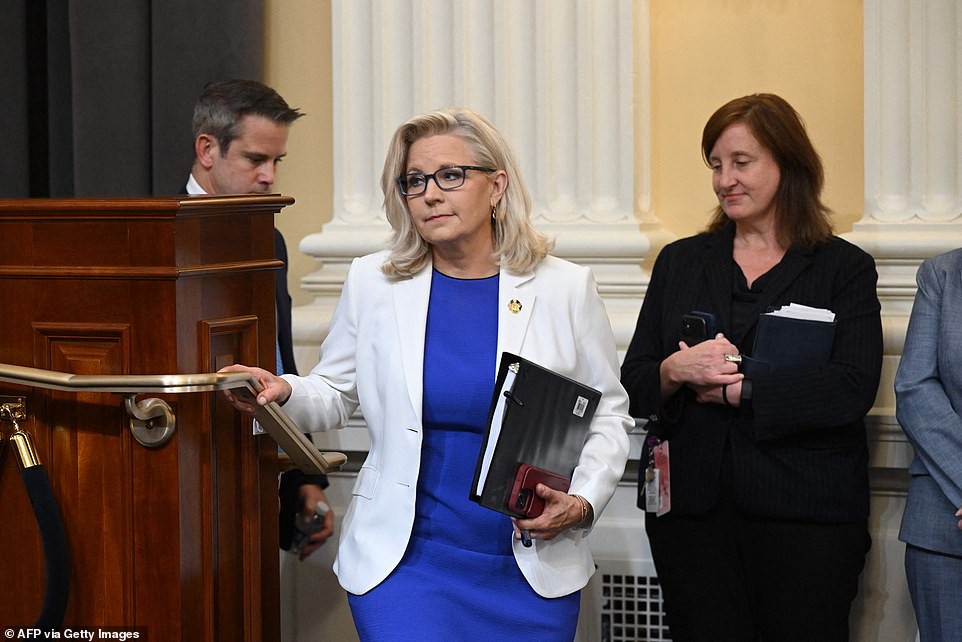 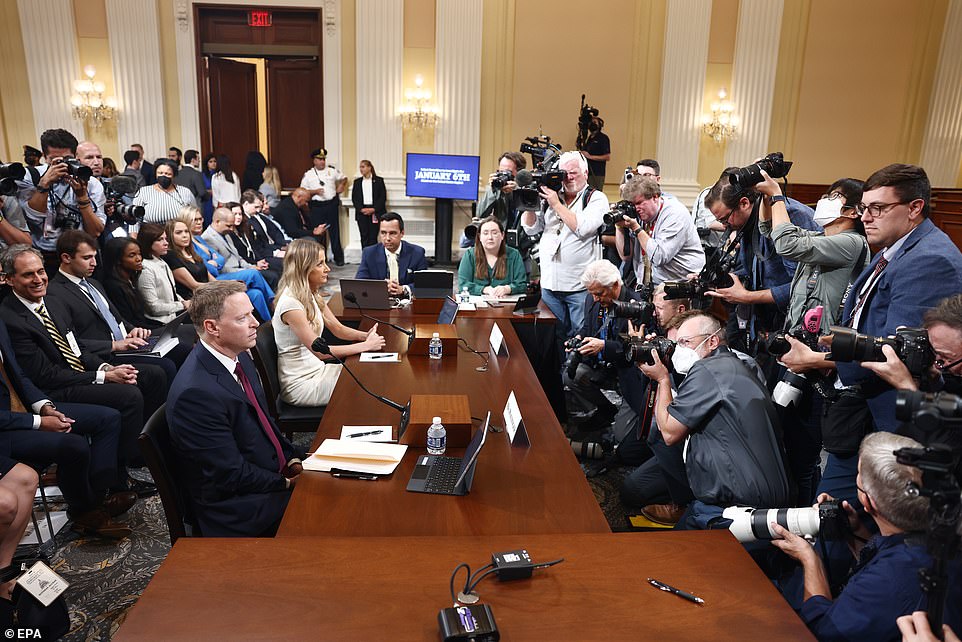 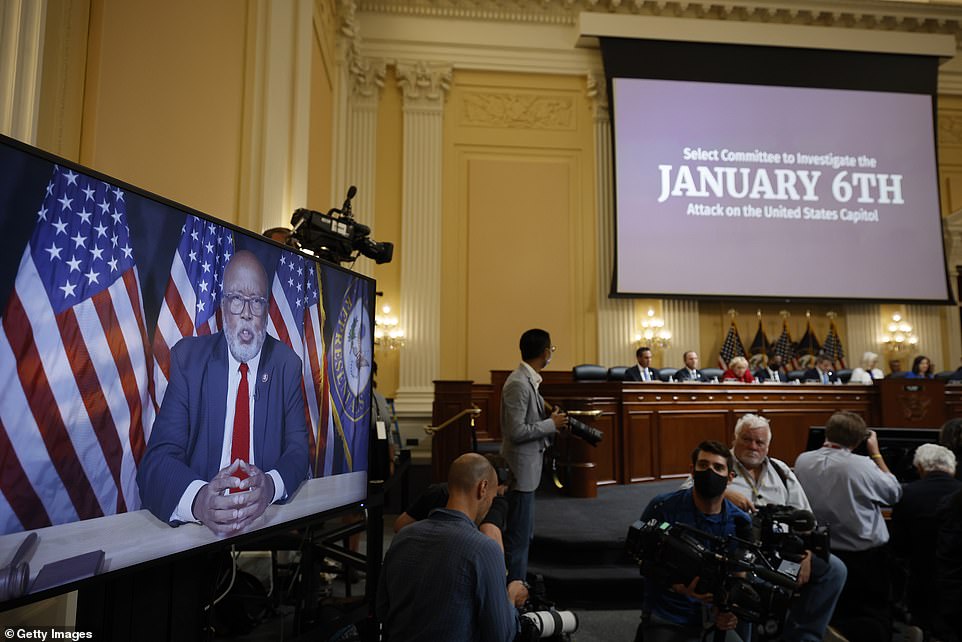 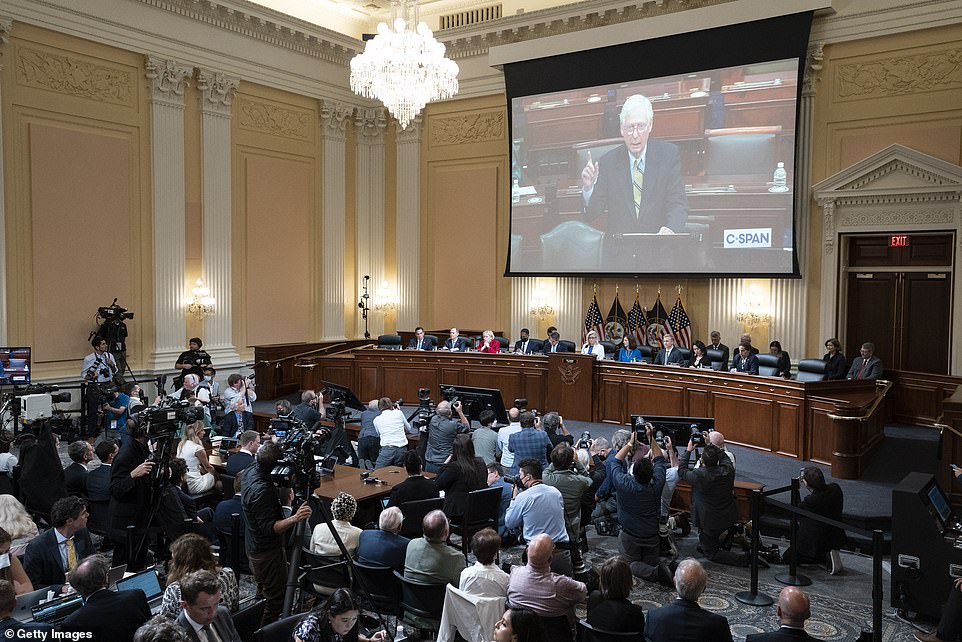 Attendees watch as remarks made by Senate Minority Leader Mitch McConnell are played during the January 6 committee’s Thursday primetime hearing. McConnell blamed the Capitol attack on former President Donald Trump on the Senate floor in February 2021

‘The mob was accomplishing President Trump’s purpose so of course he didn’t intervene,’ said committee member, Republican Rep. Adam Kinzinger. ‘President Trump did not fail to act during the 187 minutes between leaving the Ellipse and telling the mob to go home – he chose not to act.’

Virginia Democratic Rep. Elaine Luria said that ‘within 15 minutes of leaving the stage President Trump knew that the Capitol was besieged and under attack.’

But committee witnesses testified that Trump never made calls to beef up a security response.

Instead, former White House press secretary Kayleigh McEnany testifed to the committee that Trump had asked her for a list of senators he could call, in an effort to have them contest the Electoral College count.

The panel’s two in-person witnesses Matthew Pottinger and Sarah Matthews described what they witnessed on that day.

Both Pottinger and Matthews resigned over Trump’s conduct on January 6.

Matthews explained how quickly Trump could have gotten to the White House press briefing room to call off the attack.

‘It would take probably less than 60 seconds from the Oval Office dining room over to the press briefing room,’ Matthews said.

‘If the president had wanted to make a statement, and address the American people, he could have been on camera almost instantly,’ she added.

The panel used this as further proof that Trump didn’t want to do anything to stop the riot.

Later, Matthews testified that McEnany told her that Trump didn’t want to tweet out anything that urged peace.

‘And it wasn’t until Ivanka Trump suggested the phrase “stay peaceful” that he finally agreed to it,’ Matthews told the room.

‘I got the sense that they were scared,’ said Trump’s on-in-law Jared Kushner in video testimony. ‘I think he was scared, yes,’ Kushner said, confirming he had received a call from the top GOP House leader. 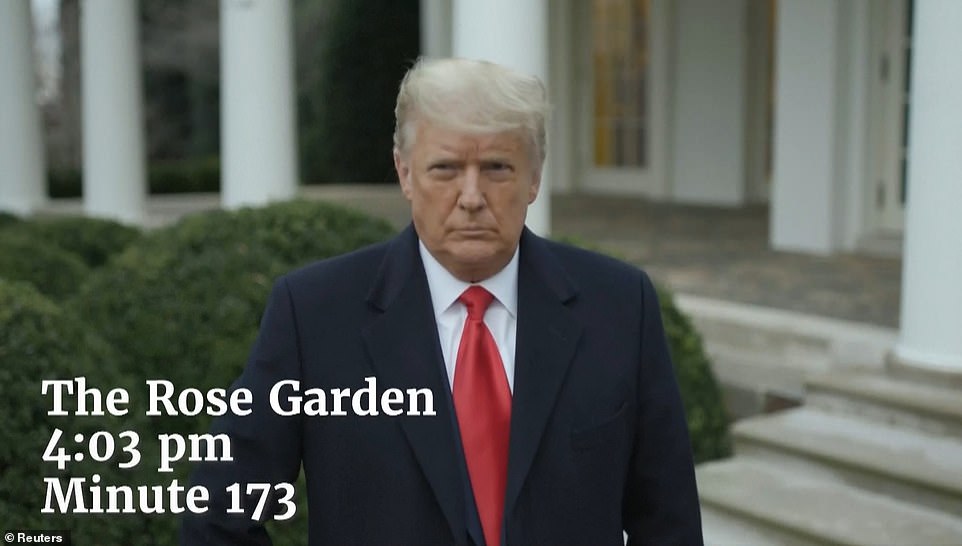 Former President Donald Trump eventually put out a video message at 4:17 p.m. that encouraged rioters to leave the Capitol. ‘I know your pain. I know your hurt,’ Trump also told members of the MAGA mob 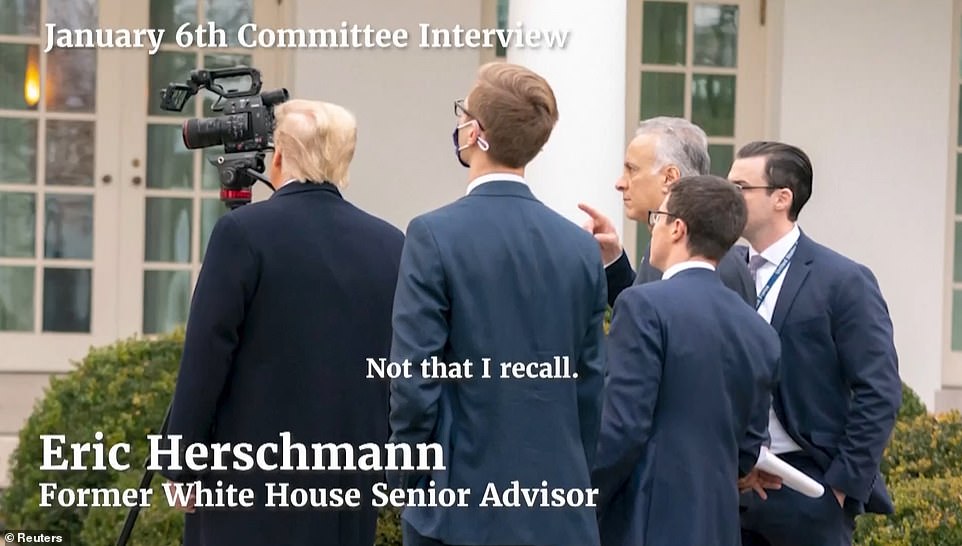 The committee showed outtakes and photos of President Donald Trump filming a video message on January 6 that went out at 4:17 p.m. 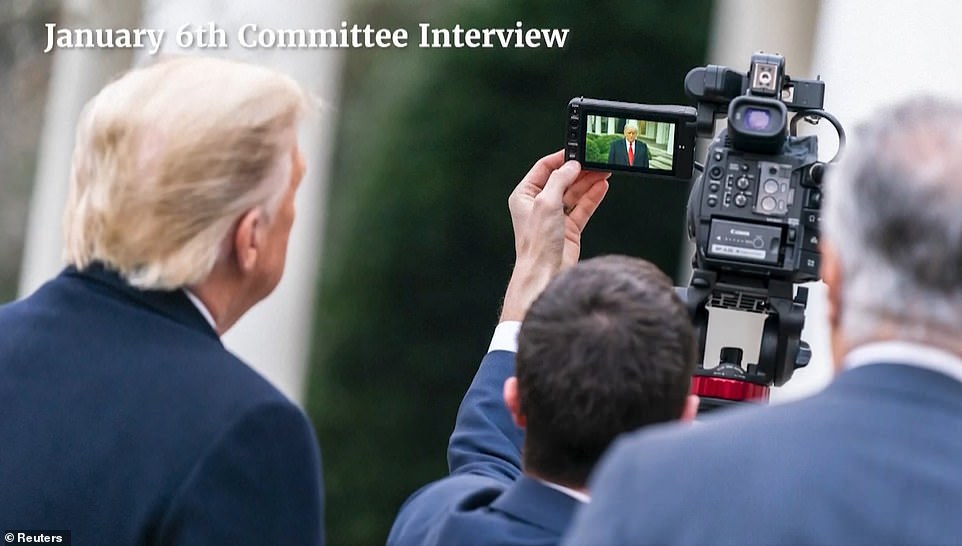 President Donald Trump (left) looks at the video he filmed on January 6 encouraging his supporters to leave the U.S. Capitol, after watching the assault go on for hours 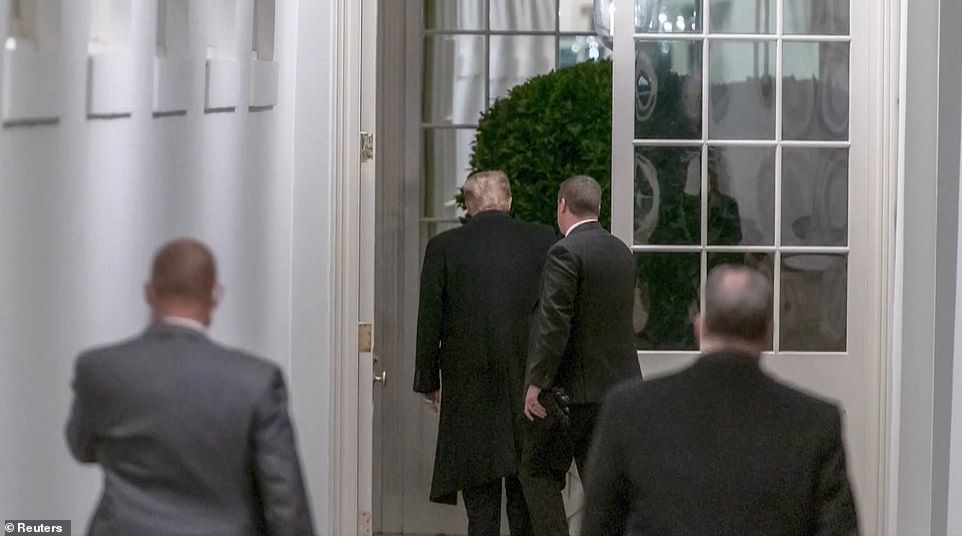 An image of Trump walking into the residence at the conclusion of the day was also shared by the committee. Trump said nothing about the riot to a staffer, instead telling the individual, ‘Mike Pence let me down,’ before going upstairs

Trump eventually did put out a video message – tweeting it out at 4:17 p.m.

The committee showed outtakes of Trump filming the video, along with photos of him alongside aides making it.

‘I know your pain. I know your hurt,’ Trump tells his supporters in the footage shown to the committee. ‘We had an election that was stolen from us,’ Trump continues, falsely claiming it was a ‘landslide.’

‘These are the things and events that happen when a sacred landslide election victory is so unceremoniously & viciously stripped away from great patriots who have been badly & unfairly treated for so long. Go home with love & in peace. Remember this day forever!’

Kinzinger remarked that Trump ‘justified the violence as a natural response to the election.’

‘He showed absolutely no remorse,’ the Illinois Republican said.

An image of Trump walking into the residence afterward was also shared by the committee.

Trump said nothing about the riot to a staffer, instead telling the individual, ‘Mike Pence let me down,’ before going upstairs.

Hutchinson recalled an impromptu meeting on January 6 after Trump returned to the White House after speaking at the Ellipse she had with former Deputy Chief of Staff Tony Ornato and Bobby Engel, the head of Trump’s security detail.

‘Did you hear what effing happened in the Beast?’ she said Engel asked her.

She was then told that Trump threw a fit when told he couldn’t go to the Capitol Building.

‘The president reached up toward the front of the vehicle to grab at the steering wheel, Mr. Engel grabbed his arm and said, “Sir, you need to take your hand off the steering wheel, we’re going back to the West Wing, we’re not going to the Capitol,”‘ Hutchinson testified.

‘The only description I received was that the president was upset and was adament about going to the Capitol and there was a heated discussion about that,’ Robinson said.

Robinson told committee members he had been part of the presidential motorcade ‘probably over 100 times’ and had never heard of something like that happening before.

He also said that he had heard about armed members of the MAGA mob. ‘

‘So there’s always concern when there’s a POTUS in the area,’ he said.

Rep. Elaine Luria, leading the questioning, then noted that the committee found out that the motorcade had been placed on standby for another 45 minutes to an hour as Trump was still insisting on going to the Capitol, even once back at the White House.

Committee members also briefly shamed Republican Sen. Josh Hawley, who infamously raised his fist in solidarity with the growing mob as he entered the Capitol Building.

The January 6 panel showed footage from January 6 of Hawley, alongside other senators, having to escape from the rioters.

Members of the audience laughed at the visual of seeing Hawley flee.