She attempted to kill a candid bikini photo of herself that had leaked onto the internet last year and has been open about using filters in her past.

But Khloe Kardashian boasted about her jean brand Good American being a ‘platform for inclusivity and body positivity’ as she introduced the latest women joining her Good Squad.

‘Good American has always been more than just a fashion brand – it’s a platform for inclusivity and body positivity,’ Khloe captioned a shot of her with the new models. 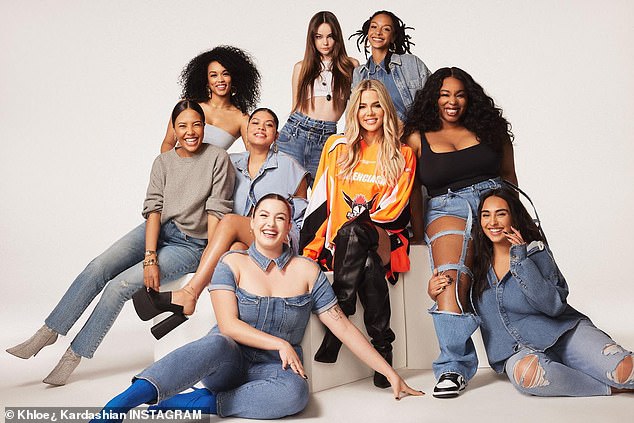 Mixed messages: Khloe Kardashian boasted about her jean brand Good American being a ‘platform for inclusivity and body positivity’ a year after attempting to kill an unfiltered bikini photo

‘We’ve worked hard to be a brand that empowers women, by redefining what is valued or even allowed in fashion by breaking down barriers and challenging dated norms,’ the caption continued.

‘When Good American launched, we introduced the world to the GOODSQUAD, a group of women who represent the brand and our values. Six years later, in October 2021, we launched a new casting call where we met thousands of women in 7 cities.’

The newest Good Squad consists of eight women from all across the country who were found in an open casting call late last year to become the new faces of the company.

‘From the very beginning, we’ve embraced body positivity and worked hard to be a brand that empowers women, by supporting and inspiring confidence. Our intention has always been to redefine what is valued or even allowed in fashion by breaking down barriers and challenging dated norms. 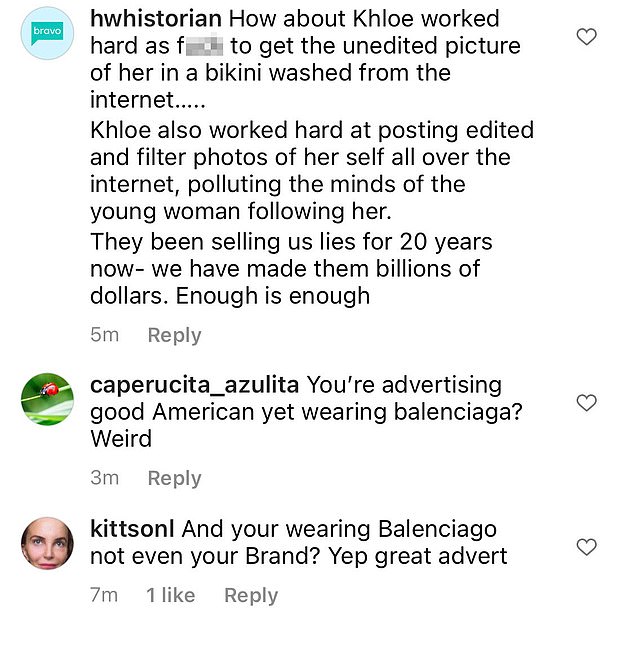 Calling her out: A fan took Khloe to task for contradictory messaging the reality star had been putting out there 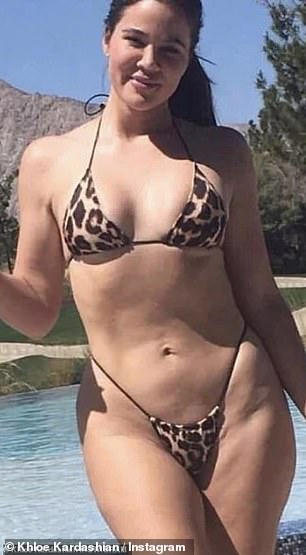 Scrubbing clean: Last year, Khloe attempted to get this bikini photo of her appearing unfiltered and un-airbrushed removed from the internet

‘We do this by promising inclusivity in our designs, but we also want our message and movement to represented by real bada**es – our GOOD SQUAD!’ reads a description of the squad on the Good American website.

Khloe was taken to task by a commenter who called out her contradictory messaging over the years.

‘How about Khloe worked hard as f*** to get the unedited picture of her in a bikini washed from the internet…. Khloe also worked hard at posting edited and filter photos of her self all over the internet, polluting the minds of the young woman following her. They been selling us lies for 20 years now – we have made them billion of dollars. Enough is enough,’ they commented.

Khloe previously admitted to being a fan of ‘a good filter, good lighting and an edit here and there’ after her unfiltered bikini image went viral back in April 2021.

After the unedited image began to make the rounds, it was reported that Khloe and her family were working overtime to wipe any trace of it from the internet. 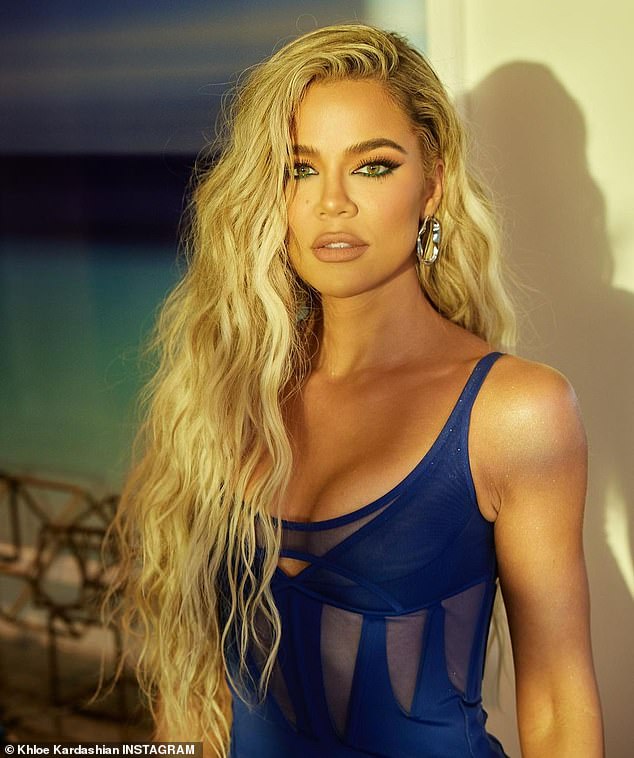 Khloe addressed the drama on Instagram days later, as she shared live videos of herself to prove that her body ‘isn’t photoshopped.’

Subsequently she issued a lengthy statement where she spoke about the pressure of being in the spotlight and her body being ‘micro-analyzed’ as a public figure.

The Keeping Up With the Kardashians star also revealed that being compared unfavorably to her siblings, Kim and Kourtney, in addition to ‘constant ridicule and judgment’ has been ‘too much to bear.’

An excerpt from her message read: ‘As someone who has struggled with body image her whole life, when someone takes a photo of you that isn’t flattering in bad lighting or doesn’t capture your body the way it is after working so hard to get it to this point — and then shares it to the world, you should have every right to ask for it to not be shared, regardless of who you are. 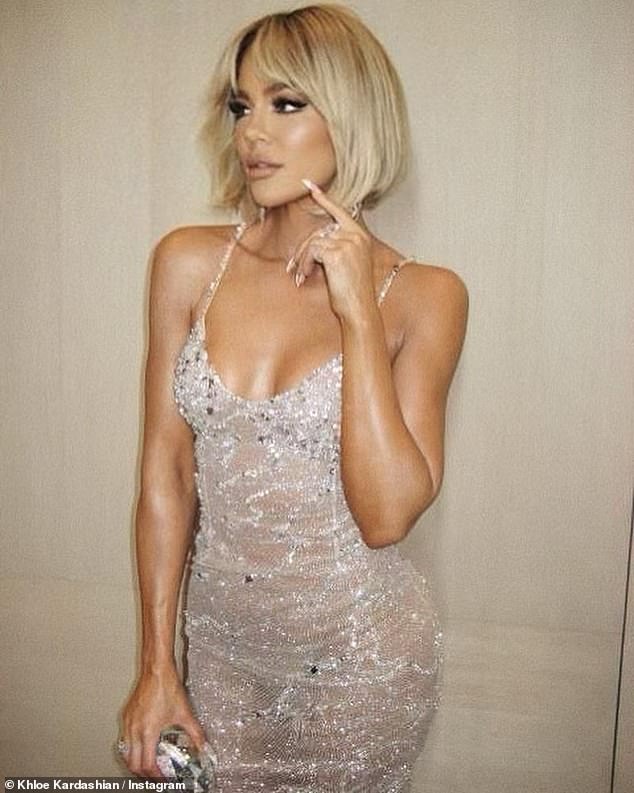 Speaking up: Subsequently she issued a lengthy statement where she spoke about the pressure of being in the spotlight and her body being ‘micro-analyzed’ as a public figure

She continued: ‘My body, my image and how I choose to look and what I want to share is my choice. It’s not for anyone to decide or judge what is acceptable or not anymore,’ also adding that she likes a good filter, good lighting and an edit here and there.’

‘I love FaceTune, that one’s great. I don’t really know of many more, but a filter, that’s like airbrushing. Who doesn’t love a good filter? Sometimes you’re having a bad day,’ she said.

Khloe also admitted she likes filters to add a different hue to her images.

‘I don’t want to see everybody in color. I need a black and white filter sometimes.’

Khloe has come under fire in recent years for her changing face and body, with many accusing the KUWTK star of brazenly photoshopping her Instagram posts to an extent fans sometimes struggle to recognize her.

Following a slew of questions from fans, cosmetic and injectables specialist Claire McGuinness weighed in on the discussion, offering her opinion on what changes Khloe may have made.

She speculated that the mother-of-one had changed her appearance so dramatically thanks to a combination of ‘surgery, injectables, weight loss… and filters, makeup and lighting’.

However, sources insisted that Khloe is not concerned with the backlash over her changing looks.

An insider told Us Weekly back in May: ‘Khloe doesn’t care about the backlash she’s been getting from fans saying she doesn’t look like herself in her recent photos.’

‘She thinks she looks great,’ the insider adds. ‘And actually [she] does not care what people think as long as she’s happy.’ 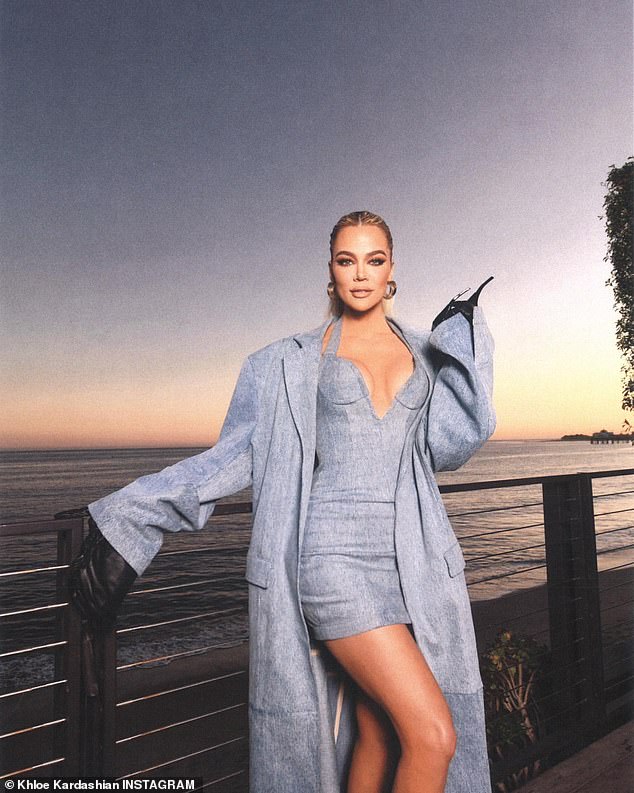 Minding her own business: However, sources insisted that Khloe is not concerned with the backlash over her changing looks