A lawyer who used hypodermic needles to inject his blood into food at Sainsbury’s, Tesco and Waitrose stores after hearing the voice of Boris Johnson has been sent for assessment at a mental hospital.

Police were finally called when officers received reports that a man was throwing blood-filled syringes and eggs at members of the public.

This included a syringe thrown at a doctor, but fortunately it bounced off her and caused no injuries.

The three supermarkets subsequently had to throw away all of their products as a precaution, causing nearly £500,000 in losses.

It was agreed Elghareeb committed the offences, but his barrister argued he was insane at the time he carried out those acts.

He denied three counts of contaminating goods and two counts of assault and a jury at Isleworth Crown Court formally found him not guilty by reason of insanity in May.

Judge Alastair Hammerton ordered psychiatrist reports and adjourned sentence to today, before a final hearing on September 30 later this year.

At the hearing today, the judge said: ‘I have made an interim hospital order and hopefully you [Elghareeb] will be submitted to St Bernard’s in the next few days. 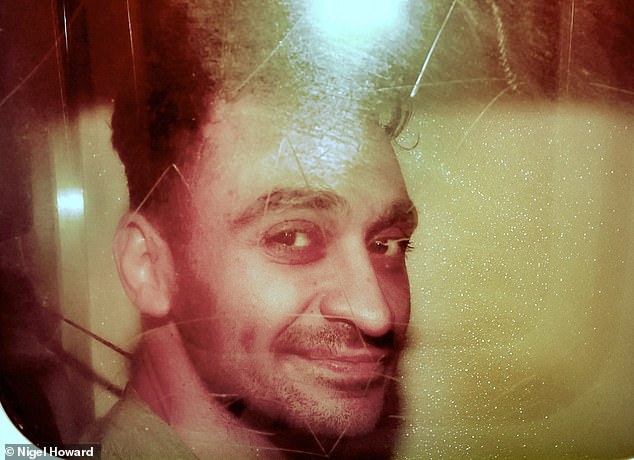 Leoaai Elghareeb (pictured at Westminster Magistrates’ Court last year) injected food with his blood at a series of supermarkets in a £500,000 rampage 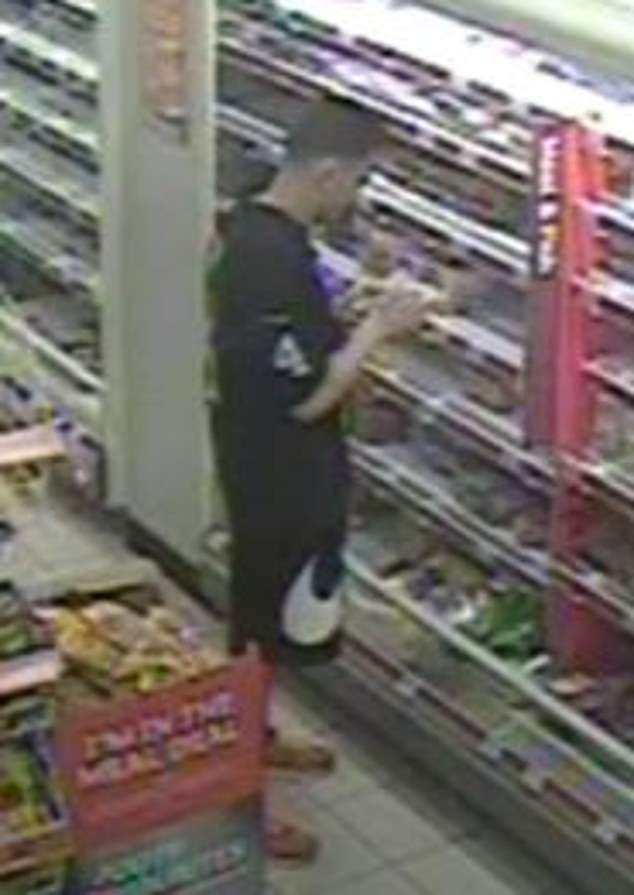 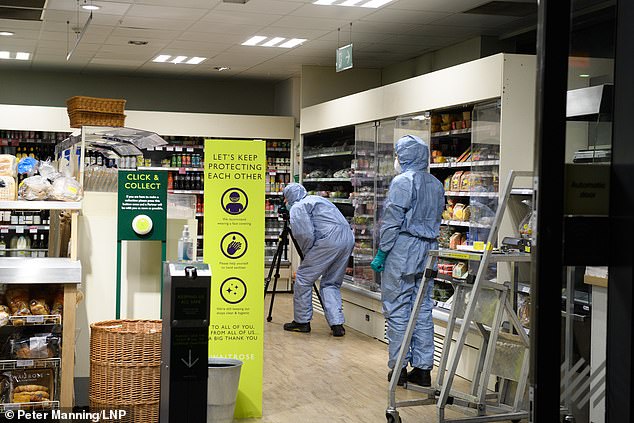 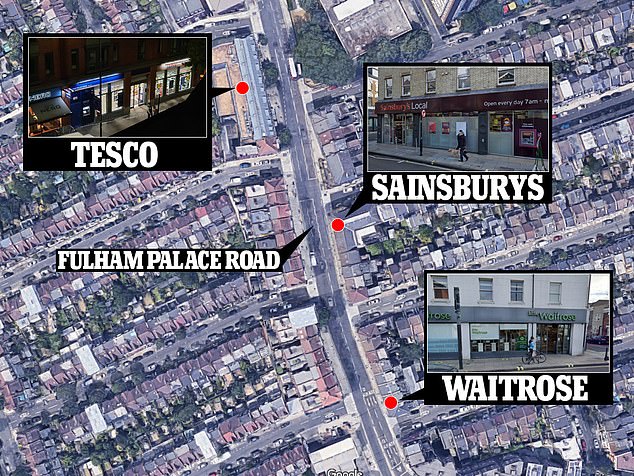 ‘Then there will be an assessment and the court will be in a better position to decide what the final order will be.’

Judge Hammerton noted that, in his view, Elghareeb’s mental health ‘does give a risk of serious harm’.

He added: ‘I note that he has not started the full range of treatments including psychological therapies.

‘Assessing Mr Elghareeb on the ward would give a far better idea of response for treatment.’

It captures him walking over to the ready meal section before then dramatically jabbing food with a syringe.

Elghareeb is then seen making his way to the next section, eyeing up more products while holding what appears to be another syringe in his mouth before injecting a second food product.

Diana Wilson, prosecuting, told the court how he walked along Fulham Palace Road with his bucket of syringes filled with his blood.

She said: ‘Along the way he also threw some of the syringes at people inside and outside the store including hitting a passerby on the street.

‘As he was confronted, because of his actions, by a succession of store personnel inside the supermarkets he assaulted one of them by pushing him, in addition to throwing verbal insults at those around him.’

Elghareeb then pushed security guard Bilal Ansari in the chest shouting: ‘You are all vile people and Sainsbury’s is vile.’

He did the same in Tesco, injecting food and throwing syringes, forcing staff to immediately close the store.

Shortly before he was arrested, Elghareeb also walked past a Tapas bar called Avanti and threw a plant pot through the open door, narrowly missing a waiter. 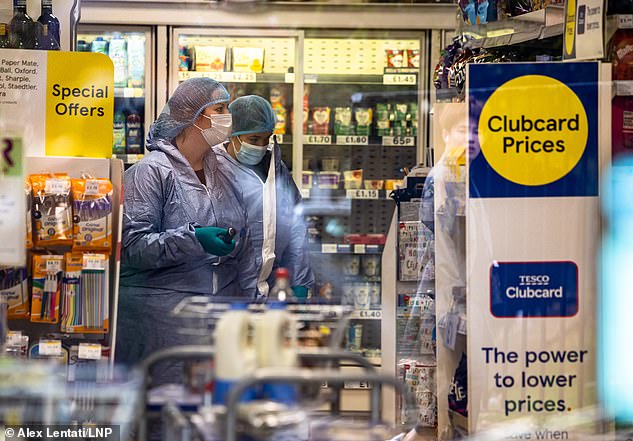 Police forensic teams tried to identify the goods which had been injected by Elghareeb, though in total, more than £500,000 of goods had to be ditched 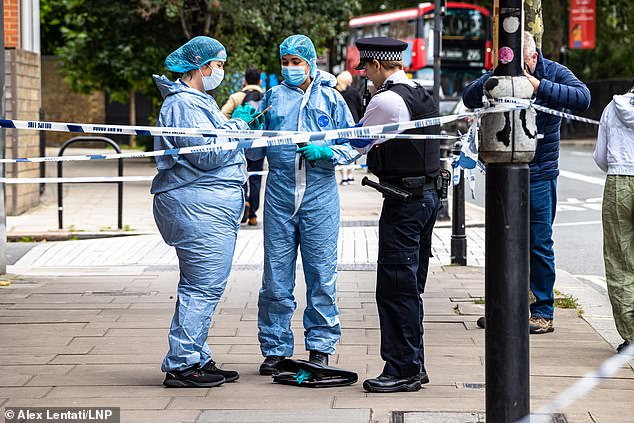 At a hearing today, Judge Alastair Hammerton made an interim hospital order mental health noting that the solicitor ‘does give a risk of serious harm’

The three supermarkets found a total of 21 syringes during a thorough search and deep-clean before they were able to reopen.

Earlier Dr Frank Farnham, a consultant forensic psychiatrist, told the court that Elghareeb suffers from a ‘severe disease of the mind resulting in a loss of a sense of reality’.

He said Elghareeb heard voices commanding him to do things by controlling his dreams and parts of his body.

Dr Farnham added: ‘These are often encountered by issues of schizophrenia.’

He claimed one of these voices to be Boris Johnson, while another was said to be a former colleague.

Elghareeb had previously worked at some of London’s most prestigious ‘Magic Circle’ law firms before he began to abuse crystal meth as part of his ‘work hard and play hard lifestyle’.

Dr Farnham continued: ‘He’s bright and academically done very well. He has had an extremely successful career within the legal profession.’

Elghareeb, of Crabtree Lane, Fulham, denied three counts of contaminating goods and two counts of assault before he was found not guilty by reason of insanity.

He appeared in court today wearing a dark blue suit with long slicked back hair.

Elghareeb was remanded in custody before being sent to St Bernard’s Hospital in west London.

A final hearing on 30th September this year at Isleworth Crown Court will decide whether he shall remain in hospital.