By Alex Hammer For Dailymail.Com

A Michigan middle school has come under fire for telling instructors to hide from parents the fact their son is transgender, since the student came to the realization while in school.

That declaration from staff at Richards Middle in Fraser, a small city just outside Detroit, came in the form of an email sent to instructors ahead of the school’s parent teacher conferences this month.

In the email obtained by Fox News, instructors were told not to tell the student’s parents about the change in the student’s gender identification, which saw the youth ask to be tabbed as a female.

The message, penned by a school counselor, reportedly warned teachers ahead of the conferences to only use the student’s ‘birth name’ and ‘refer to the pronoun “he”‘ when talking to the student’s mother.

Throughout the letter, the counselor reportedly refers to the student by their chosen female name and pronouns, and tells the teachers that the parent is still unaware of this transition.

It comes as schools across the country are increasingly allowing kids who identify as transgender to use their preferred names and pronouns without parents’ knowledge, with officials citing a federal law that prohibits sex-based discrimination in schools. 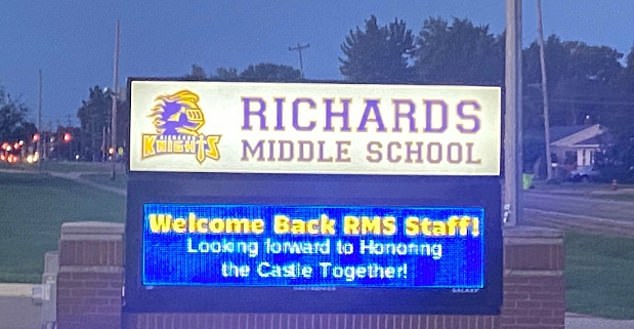 Michigan’s Richards Middle has come under fire for telling instructors to hide from parents the fact their son is transgender, since the student came to the realization while in school

It also requires schools to adopt and administer grievance procedures for students to file complaints of sexual discrimination, harassment, or violence.

The law reads: ‘No person in the United States shall, on the basis of sex, be excluded from participation in, be denied the benefits of, or be subjected to discrimination under any education program or activity receiving Federal financial assistance.’

In 2021 President Biden altered the guidance to not only apply to biological sex, but gender identity – a recently surfaced construct that refers to the personal sense of one’s gender – after former President Trump’s refusal to include it in the law, which was passed under the administration of Barack Obama in 2016.

However, it is currently unclear which portion of the guidance staffers at the public school – and others across the country – are citing with their refusal to notify parents of their children’s gender status.

Reached for comment this week, a spokesperson for the Fraser school district did not deny that the district was hiding the one student’s gender status from the parents.

‘The district is mindful of and compliant with its obligations under Title IX laws,’ the district rep told Fox in an email.