Mike Tyson is speaking for the first time about his fight with an ‘overzealous fan’ onboard a taxiing plane that was caught on camera.

In a video that has since gone viral, the former undisputed heavyweight champion can be seen having an altercation with Melvin George Townsend III after the man allegedly threw a bottle at Tyson prior to take off the night of April 20.

After watching the video and interviewing both parties involved, the San Mateo County District Attorney’s Office decided not to file any charges in connection to the case.

Through his attorney, Townsend has denied throwing a bottle at Tyson and blamed the incident on being ‘overly excited.’ 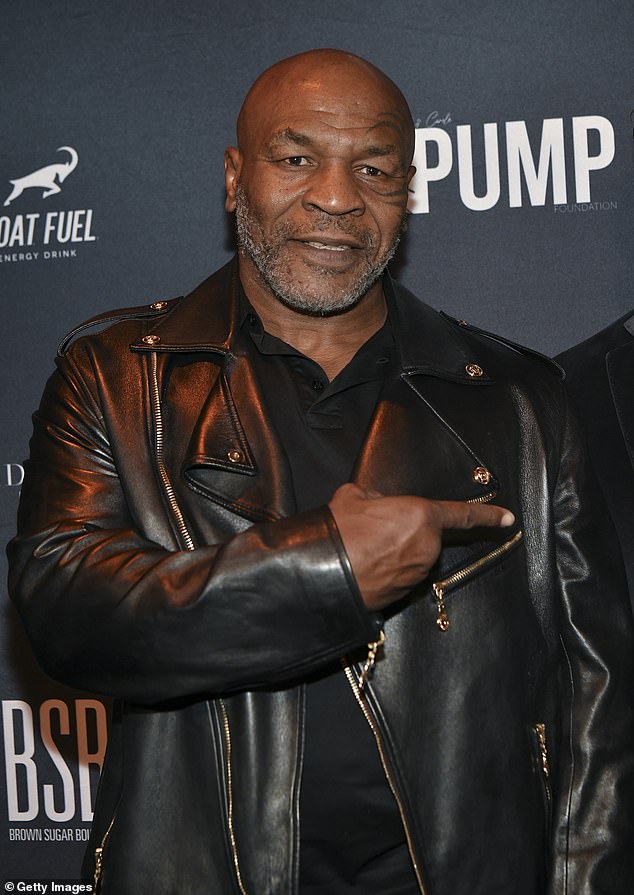 Opening up: Mike Tyson is speaking out for the first time about his fight onboard a commercial flight with an ‘overzealous fan’ on April 20; Mike pictured in February

The confrontation on the plane and subsequent fight were among the topics of conversation during a recent episode of Tyson’s podcast Hotboxin’ With Mike Tyson.

In the video, Tyson could be seen sitting in his first-class seat as Townsend appeared to attempt to talk to him. 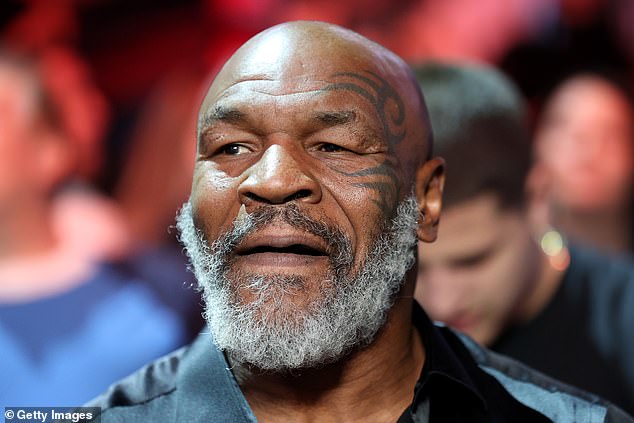 His take: ‘He was f*****g with me man,’ Tyson said of Melvin George Townsend III antics, before adding, ‘I took pictures with this n****’

According to Tyson, there’s always a possibility of him being confronted with so-called ‘overly excited’ fans, and that it happens enough that his wife, Lakiha Spencer, doesn’t want him flying on commercial flights.

The self-declared ‘baddest man on the planet’ in the 1980s, then laid out some scenarios if he were to step up security or fly with some sort of entourage.

‘What am I going to do on a f*****g plane with my friends and [a bodyguard] he’s supposed to watch me?’ he asked co-host DJ Whoo Kid and his podcast guests Matt Barnes and Stephen Jackson. 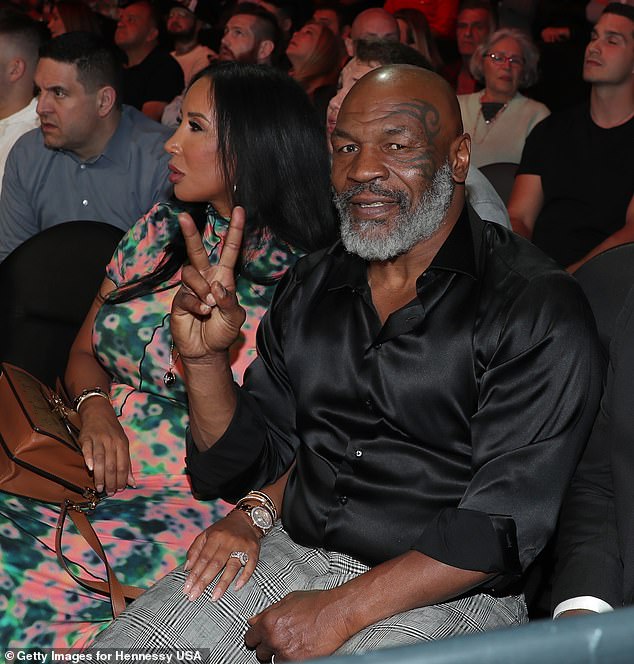 Too risky: Tyson says his wife, Lakiha Spencer, gets mad when he takes commercial flights due to overzealous fans; the couple are pictured at last weekend’s light heavyweight title fight between Canelo Alvarez and Dmitry Bivol

Tyson went on to describe incidents like the one on the plane as something that ‘triggers me.’ With the benefit of hindsight, Tyson admits engaging in confrontations with troublesome fans isn’t worth the battle.

The San Mateo County District Attorney’s Office decided not to file any charges against Tyson ‘based on the circumstances surrounding the confrontation.’

Those circumstances include ‘the conduct of the victim leading up to the incident, the interaction between Mr. Tyson and the victim, as well as the requests of both the victim and Mr. Tyson that no charges be filed in this case.’

The former boxer’s attorney followed up by thanking ‘San Mateo District Attorney Stephen Wagstaffe, the San Mateo County Sheriff, and all law enforcement agencies involved in this investigation for their careful, diligent, and professional work.’

Video of the incident shows Tyson punching Townsend before the JetBlue flight had taken off from San Francisco to Fort Lauderdale, leaving the Florida man with a bloody forehead.

Townsend initially had a cordial exchange with Tyson, according to TMZ. A witness says he and a friend greeted the 55-year-old former boxer as they boarded the plane and even got their picture taken with Tyson.

Tyson soon grew tired of engaging with Townsend and reportedly asked him to be quiet. When Townsend continued talking, Tyson reportedly then stood, turned, and threw several punches to his face and forehead.

Another video from the flight shows the aftermath of the incident, with Townsend sporting traces of blood on his forehead.

‘My boy just got beat up by Mike Tyson,’ said the man shooting the video. ‘Yeah, he got f***ed up. Just trying to ask for an autograph. I don’t know what happened.’ 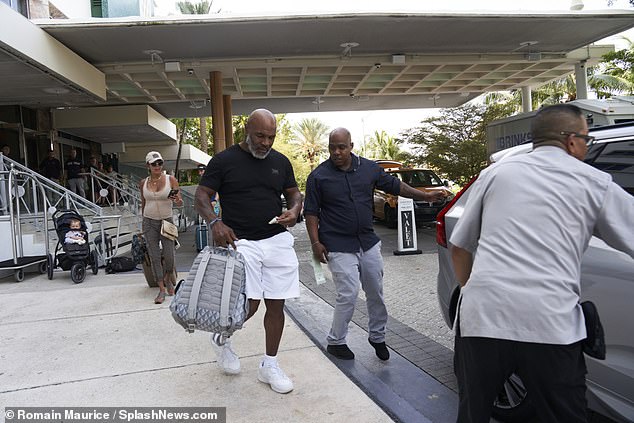 ON the go: One day after the incident, Tyson was seen leaving the Eden Rock Hotel, where he was ushered into a waiting car. He had been scheduled to attend the Benzinga Cannabis Conference in South Florida

‘Our client is a big Mike Tyson fan,’ Townsend’s lawyer told TMZ. ‘When Mike Tyson boarded the plane, he became overly excited. At first, their interaction was cordial.

‘At a certain point, Mr. Tyson clearly became agitated by an overly excited fan and began to strike him in an excessive manner,’ he continued. ‘This situation could have been avoided simply by contacting the flight attendant. Our client denies throwing a water bottle prior to being struck by Mr. Tyson.’

San Francisco police did detain two individuals from the April 20 flight, but declined to identify either. They did pass along the video to San Mateo County police, who have since declined to press charges. 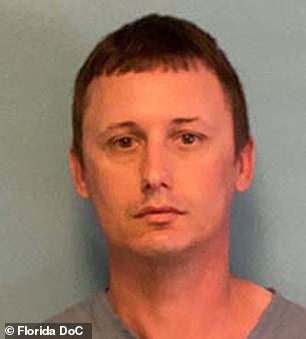 The man who was punched by Mike Tyson after allegedly harassing the boxing legend aboard a JetBlue airplane at the San Francisco Airport has been identified – and he has a lengthy criminal record. Melvin George Townsend III of Punta Gorda, Florida , has 20- and 15-month prison sentences for a variety of crimes, including possession of Oxycodone, burglary, grand theft, fraud, and trafficking stolen property, according to a records search

‘On Wednesday April 20, 2022, at approximately 10:06 p.m., San Francisco Police officers assigned to the SFPD Airport Bureau were dispatched to a physical altercation onboard an airplane located at the Domestic Terminal of the San Francisco International Airport,’ read a San Francisco police statement provided to DailyMail.com.

‘Officers arrived and detained two subjects that were believed to be involved in the incident. One subject was treated at the scene for non-life-threatening injuries. That subject provided minimal details of the incident and refused to cooperate further with the police investigation. Both subjects were released under 849(b) of the California Penal Code pending further investigation.

‘The SFPD is aware of video that possibly captured the incident, which surfaced following the initial investigation. That video has been forwarded to the San Mateo County Sheriff’s Office, which has investigative jurisdiction on this incident.’

Like Tyson, who served nearly three years in an Indiana prison after being convicted of rape in 1992, Townsend has his own criminal record.

The native of Punta Gorda, Florida has served 20- and 15-month prison sentences for a variety of crimes, including possession of Oxycodone, burglary, grand theft, fraud, and trafficking stolen property, according to a records search. In one 2018 incident he stole a trailer by trespassing and hitching the unit to his pickup, reported TMZ, which was the first media outlet to identify him.

Townsend was last released from a Florida prison in July of 2020 after serving 15 months of a 25-month sentence for that incident and his use of a fraudulent personal ID. He previously did time for trafficking stolen property in 2009 and 2010. 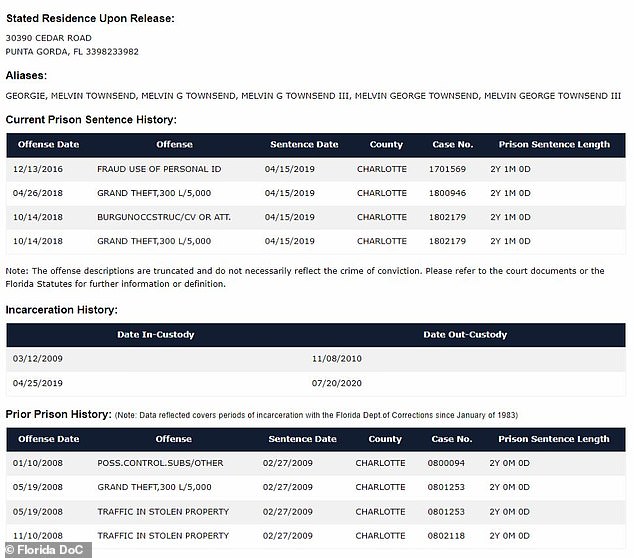 The altercation came after a long day of pot smoking for Tyson, who was seen celebrating the pot-themed 4/20 holiday on San Francisco’s Hippie Hill on Wednesday.

Tyson maintained his festive mood on his way out of town, too, as witnessed by Bay Area-photographer Josh Edelson, who was arriving at San Francisco’s airport after a trip to Italy. Edelson approached Tyson roughly an hour-and-a-half before Tyson’s incident on the JetBlue flight.

‘When we walked out of the airport, I turned to my wife, like, ”Oh my God, that’s Mike Tyson right there,”’ Edelson told DailyMail.com.

‘So I went up to him and was like, ”Mike do you mind if I get a picture with you real quick?” And he responded with, ‘I don’t give a f***,’ and then he took a huge toke of his joint.

‘I went and took a picture with him, and he took another big toke and said ”goodbye” to his driver, who I assume drove him there from Hippie Hill or wherever he came from in San Francisco,’ Edelson continued. ‘And that was pretty much it. I didn’t really think very much of it. Then I left and went home, and then woke up this morning, and as it turns out, he was just arriving to go fly home or [Fort Lauderdale.]’

According to Edelson, Tyson appeared to be in a peaceful mood before boarding his redeye flight to Florida.

‘He was really chill,’ Edelson said. ‘He seemed overall happy. He obviously was smoking, was having a good time and seemed to be in a really good mood.’

Advertisement Eva Longoria once again showed off her sensational sense of style as she stepped out at the Welcome to Cannes Party at the 75th Film Festival on Thursday. The actress, 47, cut a glamorous figure in a one-shouldered clinging dress, which gave a flash of her toned midriff through a side cut-out. She completed her… 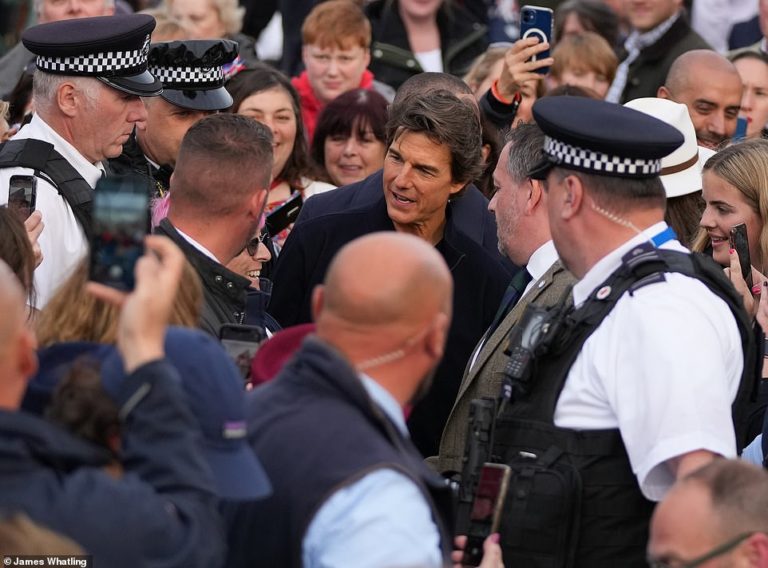 Advertisement Tom Cruise’s arrival in Windsor sparked frantic scenes on Sunday, as he geared up to take part of the official celebrations for Queen Elizabeth II’s Platinum Jubilee at Home Park. The Top Gun actor, 59, was mobbed by star-struck fans upon his arrival in the Berkshire town for his secret role in the event, before… 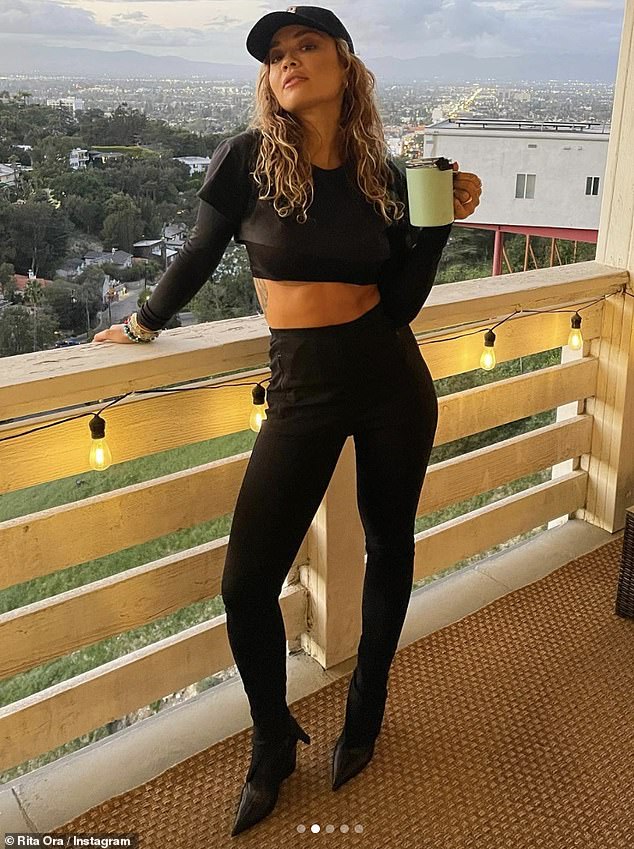 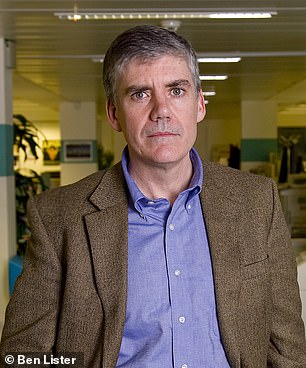 Advertisement Percy Jackson author Rick Riordan put ‘racist’ trolls on blast in a scathing statement following the online harassment of 12-year-old Leah Jeffries, a Black actress, who was recently cast in the TV adaptation of the fantasy series. In a post shared to his website Tuesday, Riordan slammed a subset of fans upset that the… 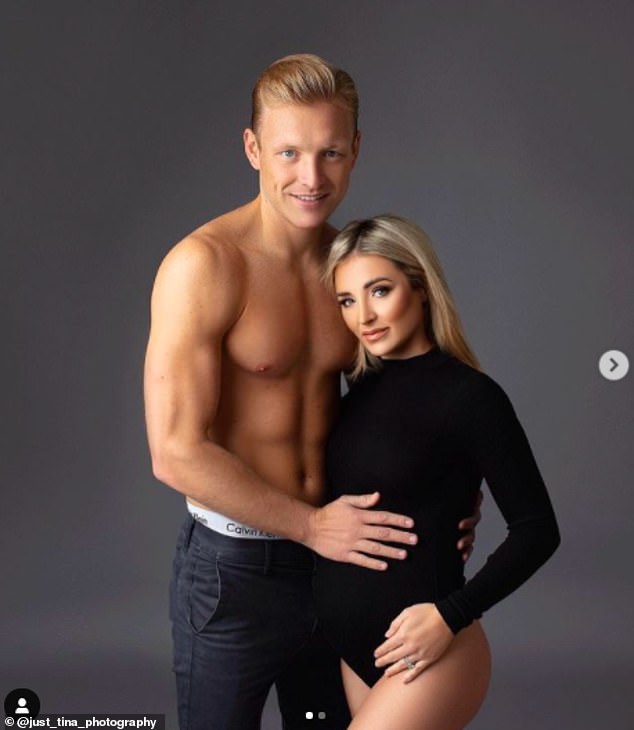 Advertisement Jess Wright’s brother Josh cradled his pregnant wife Hollie’s blossoming baby bump in snaps shared to his Instagram account on Monday.  The Crawley Football Club midfielder, 31, and Hollie have just announced they are expecting their first child and will be seen sharing the happy news with Jess on her ITVBe show The Wedding airing… 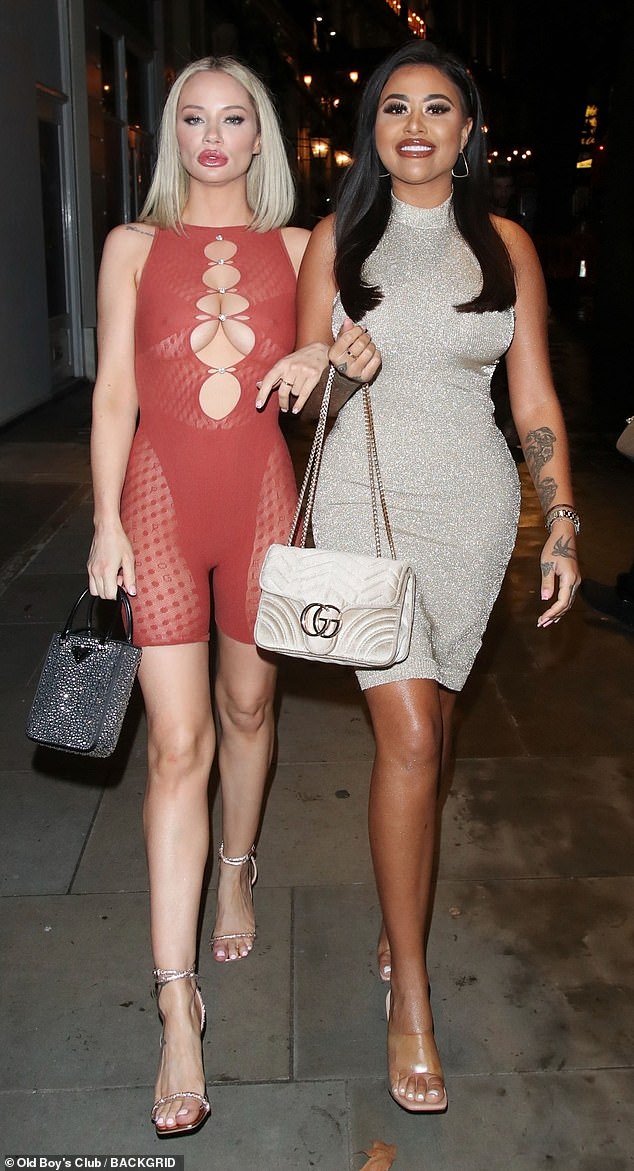