A ‘naive’ college student gave a fake alibi to police because he was ‘in awe’ of a ‘manipulative’ teenage girl who had killed a doctor in a homophobic attack, a court has heard today.

Lewis Newman, 18, falsely claimed Dionne Timms-Williams, 17, had stayed the night at his home after Dr Gary Jenkins, 54, was kicked and punched to death in the early hours of July 20 last year in Cardiff.

After being found guilty of murder, Timms-Williams was locked up for at least 17 years while her fellow killers Jason Edwards and Lee Strickland will spend at least 32 years behind bars.

Newman, who was 17 at the time of the Bute Park attack, did not know the then-16-year-old Timms-Williams had committed murder when he lied to police, Cardiff Crown Court heard today.

He claimed Timms-Williams had only told him there was a ‘serious incident’.

His representative Susan Ferrier said he was a ‘naive 17-year-old’ who had ‘always been a fairly shy and introverted young man’ and was to an extent ‘in awe of this woman’.

The now 18-year-old pleaded guilty to perverting the course of justice and was sentenced to six months in a young offenders unit suspended for 12 months. 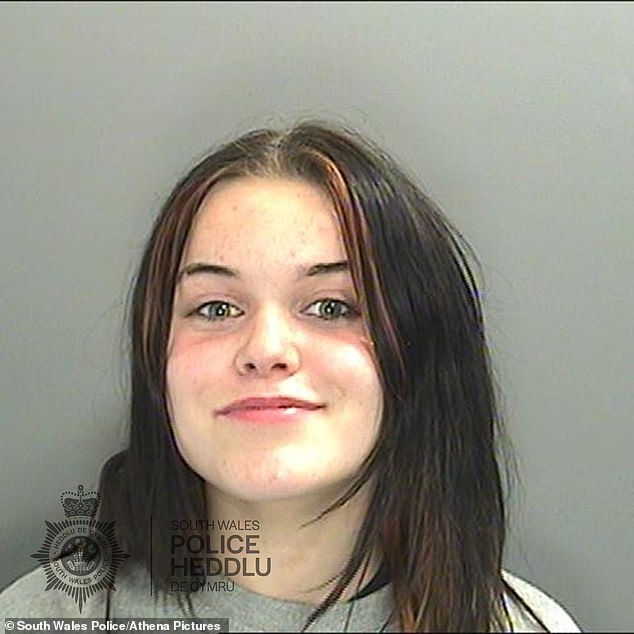 Lewis Newman, 18, falsely claimed Dionne Timms-Williams, pictured, 17, had stayed the night at his home after Dr Gary Jenkins, 54, was kicked and punched to death in the early hours of July 20 last year in Cardiff 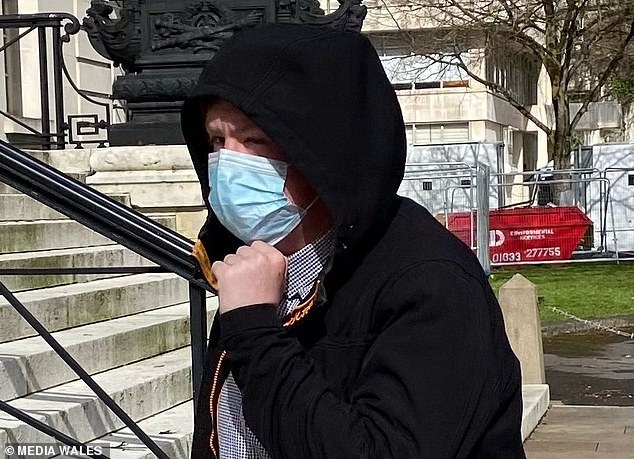 Newman, pictured, who was 17 at the time of the Bute Park attack, did not know the then-16-year-old Timms-Williams had committed murder when he lied to police, Cardiff Crown Court heard today 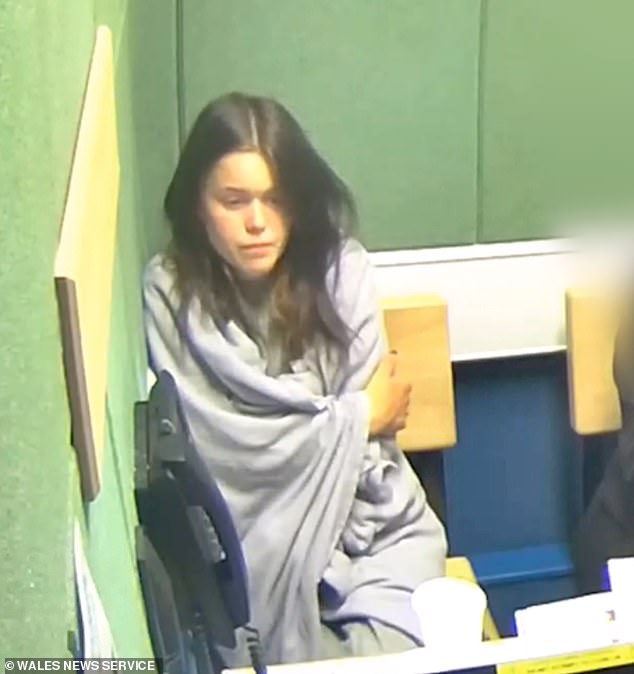 After being found guilty of murder, Timms-Williams (pictured) was locked up for at least 17 years while her fellow killers Jason Edwards and Lee Strickland will spend at least 32 years behind bars

Prosecutor Nick Gedge said: ‘Initially the investigation was not for murder because Dr Gary Jenkins didn’t die until August 5.

‘It started as an investigation into an attempted murder and robbery.

‘And on July 28, following the arrest of Dionne Timms-Williams, Mr Newman provided a statement to South Wales Police.

‘He said he had been with Miss Timms-Williams between around 5pm and 9pm on July 19 in the area around Maindy leisure centre.

‘He said they parted company at about 9pm and that he went home and the next time he saw her was at his home address at 2am the next day.

‘He told police he had been sleeping at home and heard a knock on the door. On him opening the door she asked if she could stay the night.

‘The following morning she thanked him for allowing her to stay the night and she said she had made his bed for him [he told police].’

Newman gave police the name of a person that Timms-Williams may have gone to see after she left him. 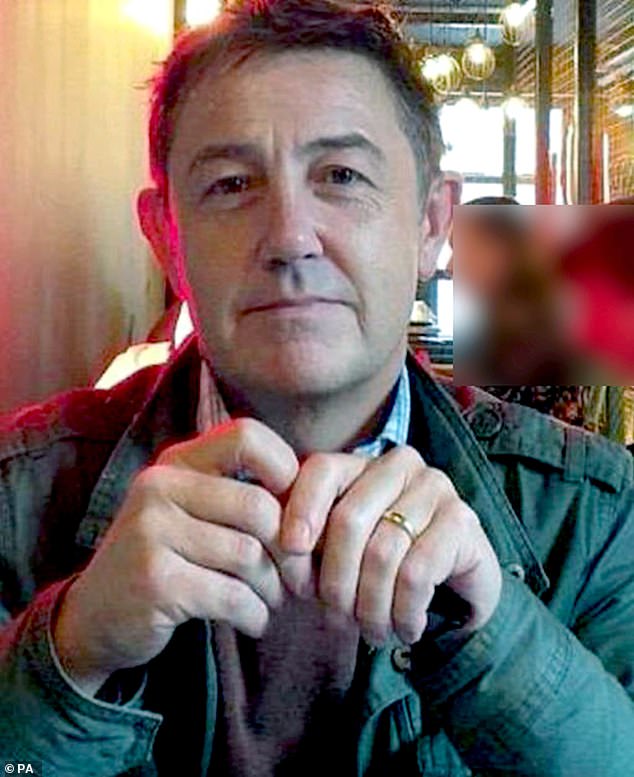 Dr Gary Jenkins, pictured, has been described as a ‘kind’ and ‘compassionate’ family man

Police investigations later revealed Timms-Williams had actually gone to that person’s home after the attack and not to Newman’s.

Mr Gedge added: ‘The statement briefly led the investigation team away from other possible witnesses and possible forensic avenues of investigation.

‘Mr Newman [later] said that on July 20 Miss Williams had asked him to say she stayed at his address the previous night if anyone asked because she had been in a serious incident.

‘He said she had been vague and he only started to suspect she was involved in the death of Dr Jenkins when the news began be reported in the media.’

His representative Susan Ferrier said: ‘When [Newman] went to college he was befriended, on the face of it, by Miss Timms-Williams and introduced to a group of friends, which was something of an excitement for this young man who had lived a life where he didn’t socialise.

‘Perhaps to an extent he was in awe of this woman.’

Ms Ferrier said Newman, now 18, had been ‘used’ by Timms-Williams to provide excuses on other occasions.

‘There was some misplaced loyalty from this young man, not realising at the time how serious the offence would be.’

She told the court Newman did not hold up the police ‘for any period of time really’, adding: ‘He had never been in trouble before… he continues to live at home with his family who are supportive and decent people.’

Newman has been struggling with anxiety and panic attacks during the investigation into him, Ms Ferrier said and is hoping to return to college in September and continue studying. 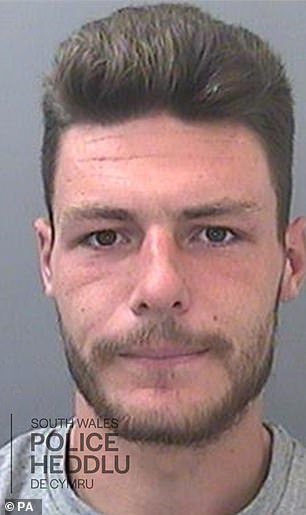 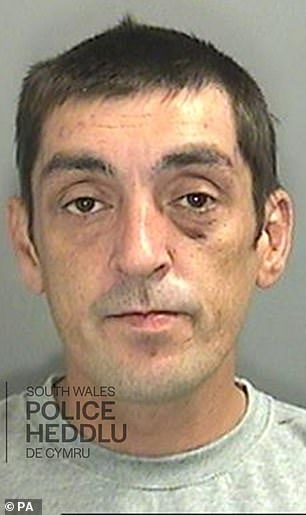 Passing sentence Judge Daniel Williams said Timms-Williams had asked Newman to lie in the hope of diverting police attention away from the person she really stayed with who was able to ‘undermine’ her account of what had happened that night.

The judge told Newman: ‘You had fallen out with her some time before and you say you were trying to make up with her by helping her out in this way.’

Judge Williams pointed out Newman ‘did nothing’ to correct the false account before his arrest but he conceded Timms-Williams had been ‘manipulative’.

Newman, of Ventnor Place in Mynachdy, who was sentenced to the six months with 12 months suspended, must also complete 150 hours of unpaid work and pay a £128 victim services surcharge.

Edwards, 25, Strickland, 36, and Timms-Williams, 17 were convicted of the murder of Dr Jenkins, who was described as a ‘kind’ and ‘compassionate’ family man, after an eight-day trial in February at Merthyr Crown Court in South Wales.

Prosecutors said they had been ‘motivated by greed, homophobia and straight-up violence’.

Timms-Williams met her accomplices earlier that night, having not been known to each other prior to the attack.

She was seen laughing as she punched and kicked father-of-two Dr Jenkins, 54, during the brutal robbery in the shadow of Cardiff Castle, on July 20 last year.

Disturbing audio captured the moment the trio started encouraging one another as they screamed ‘stamp on his head’ and ‘keep going’ during the 15-minute onslaught. 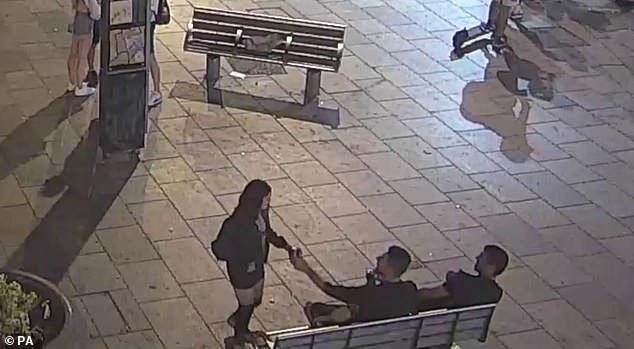 The psychiatrist screamed ‘get off me’ and ‘please stop’ as he repeatedly asked why his attackers had targeted him, humiliating him further as they pulled down his blood-soaked trousers to expose his penis.

Edwards and Strickland were also caught on CCTV laughing in the wake of the attack after they stole Dr Jenkins’ card to buy alcohol.

Dionne, who lived with her company director mother in the Vale of Glamorgan village of Creigiau, was known to have been in a same-sex relationship herself – leaving neighbours baffled when asked about the homophobic attack.

Dr Jenkins had visited Bute Park that night ‘looking for sexual contact with other men’, and the three defendants were looking to rob ‘vulnerable gay men who were in the park for sex’, Merthyr Tydfil Crown Court was previously told.

The respected psychiatrist was seen on CCTV footage around the area walking through the area before Timms-Williams, Edwards and Strickland all met for the first time on nearby park benches.

After they finished robbing and beating the father-of-two, his attackers used his bank card to purchase alcohol at a nearby Esso Garage, before Edwards and Strickland were seen on CCTV taking a drunken ride through the city on a rented scooter.

Jurors watched key moments of the evening’s horrifying attack during the trial, including a bodycam clip of Strickland’s arrest and Timms-Williams’ police interview in which she declined to comment.

The court heard Dr Jenkins suffered an ‘unsurvivable brain injury’ after he was ‘beaten, tortured and left for dead’ and sadly died at the University Hospital of Wales two weeks later on August 5.

‘Professionally, he had a successful medical career as a Consultant Psychiatrist and was highly-respected for the expert care and support he provided to his many patients.

‘The attack upon Dr Jenkins by the three defendants was cowardly and senseless in the extreme.

‘Nothing will fill the void in the lives of those who loved Gary and have suffered the heartbreak of losing him in the most devastating circumstances.’