A police officer who pursued a sexual relationship with a domestic abuse victim and texted her up to 50 messages a day has been sacked for ‘undermining the trust of women in the police service’.

The Hampshire Constabulary constable, whose identity was withheld by the tribunal panel, was found to have committed gross misconduct through five breaches of regulations for his ‘inappropriate contact’ with the ‘highly vulnerable’ woman.

The breaches by the Portsmouth-based officer included deleting messages to cover up the contact, asking the woman out for cocktails and accessing the force’s computer system without a policing purpose.

Handing down the sanction of dismissal without notice, Legally Qualified Chair Sarah Gaunt told the hearing the officer’s actions were ‘intentional and deliberate’ and his conduct was a ‘fundamental breach of public trust.’

But the panel ruled that the officer should remain anonymous ‘to protect their welfare’.

Ms Gaunt told the hearing at the force HQ in Eastleigh: ‘The panel finds Officer A was in a position of trust.

‘Officer A had a responsibility to provide support and assurance to a vulnerable, if not highly vulnerable, domestic abuse victim.

‘The officer had recently attended domestic abuse training and become a domestic abuse champion and should have been aware of the consequences of his actions.

‘His actions were intentional and deliberate. The conduct was a fundamental breach of public trust.’

Ms Gaunt added that the actions of Officer A undermined the reputation of Hampshire Constabulary and policing in general, particularly by vulnerable victims, especially women.

She said Officer A had also caused psychological distress to the woman.

Ms Gaunt continued: ‘The panel has been mindful of the purpose of these proceedings, which is to maintain public confidence in and the reputation of the police service and to uphold high professional standards.

‘Given this officer’s specific role, this panel’s decision is that the least severe sanction that can be imposed is dismissal without notice.’

Speaking in a pre-recorded interview played at the hearing, the woman described the officer as ‘constantly messaging’ her to make sure she was OK.

She added: ‘I remember him pointing out there’s a bar or a restaurant… and he said in text ‘When this is all over, I will take you out for cocktails and cheer you up’.

‘When you invite someone out for dinner and cocktails that’s a date, that’s not a normal police thing to do… that’s a date invitation.’

She said she believed he had a ‘romantic interest’ in her.

The woman described being ‘naive’ and added: ‘I should have seen the flirtiness of it.’ 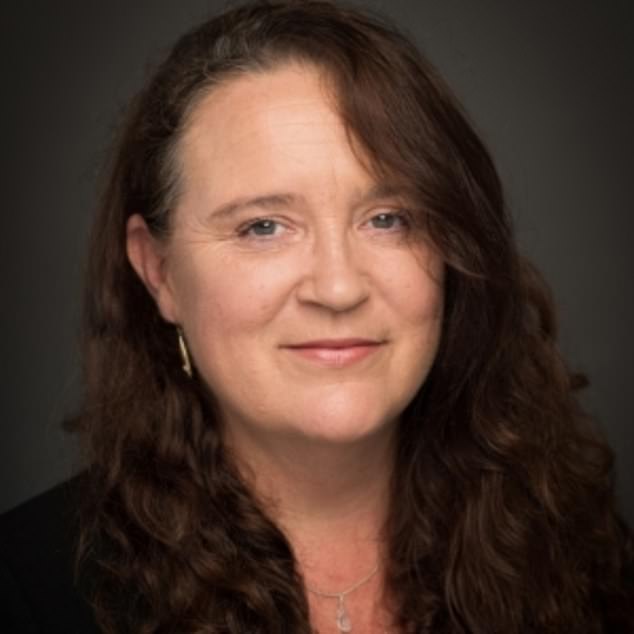 Pictured: Barrister Sarah Gaunt, chair of the panel that decided the disgraced officer’s name should be kept secret from the public

The panel heard evidence that the officer had sent the woman 51 messages in a single day, and that texts would often include kisses and at least once the officer called her ‘hun’.

The panel ruled that the officer could not be named, saying in a statement: ‘Media are unable to identify Officer A as a reporting restriction was put in place.

‘The decision has been made based upon a review of medical evidence which supports the requirement for the officer to remain anonymous in order to protect their welfare.’

Responding to the case, Deputy Chief Constable Ben Snuggs, of Hampshire Police, said: ‘There is no place in policing for those who use their position to abuse the trust placed in us by vulnerable members of the public.

‘The actions of this officer not only let down the woman he was supposed to protect, but also undermines the exceptional work his colleagues do every day to keep people safe.

‘Our communities can have trust and confidence that such inappropriate behaviour in our workforce is rooted out and that we are a force that serves with respect, integrity and without fear or favour.’