Pope Francis called out the ‘atrocities’ and ‘ever more horrendous cruelties’ by Russian forces in Ukraine as he prayed with child refugees this morning.

The pontiff also kissed a ragged Ukrainian flag brought from Bucha, the Kyiv suburb where war crimes are alleged to have taken place in recent days.

Francis, 85, stood with child refugees at his weekly general audience at the Vatican, handing them chocolate Easter eggs. 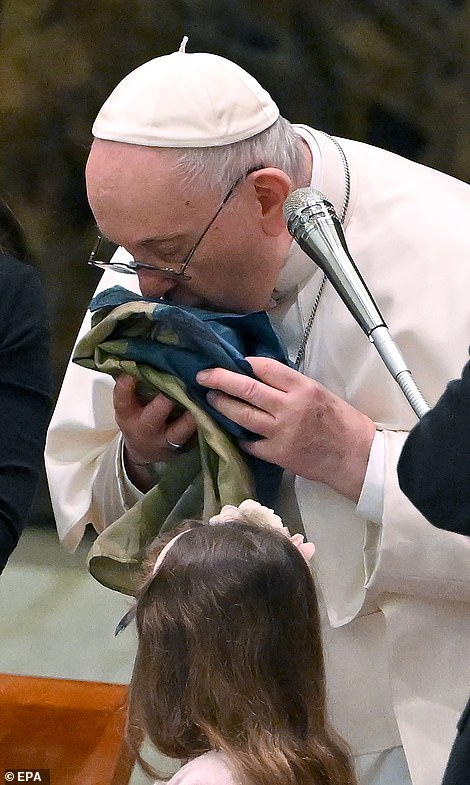 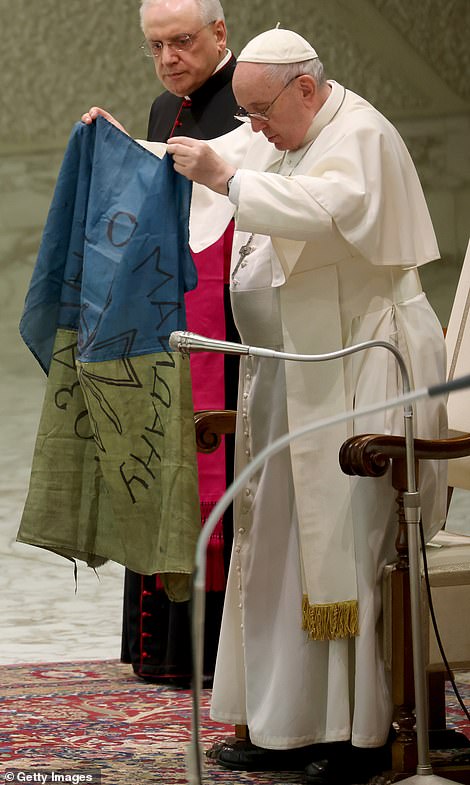 Francis kissed a ragged, faded Ukrainian flag brought to the Vatican from Bucha near Kyiv during days of civilian attacks 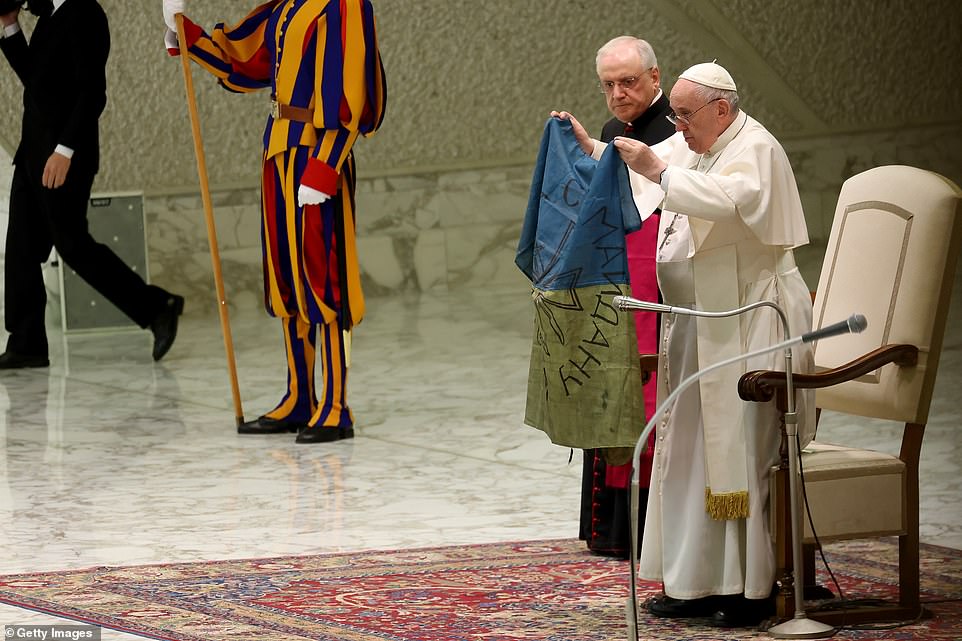 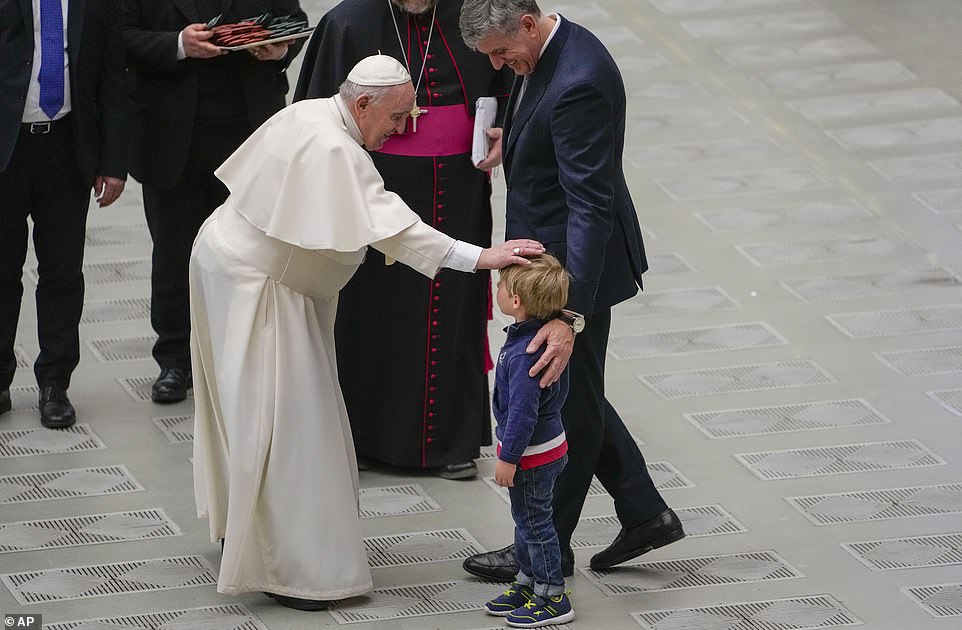 He said: ‘The recent news about the war in Ukraine, instead of bringing relief and hope, instead attests to new atrocities, such as the Bucha massacre.

‘Ever more horrendous cruelties, also perpetrated against defenceless civilians, women and children. These are victims whose innocent blood cries out to heaven and begs for mercy’, AFP reported.

He also lamented the ‘powerlessness’ of international organisations and said ‘the old history of competing great powers’ has continued despite the hope which followed World War Two.

The pope has been careful not to take sides since Russia invaded Ukraine in late February, but has in recent days hardened his careful rhetoric.

Francis blessed those gathered and said Russian ‘cruelties’ in Ukraine must end, adding ‘Let’s not forget the Ukrainian people’ 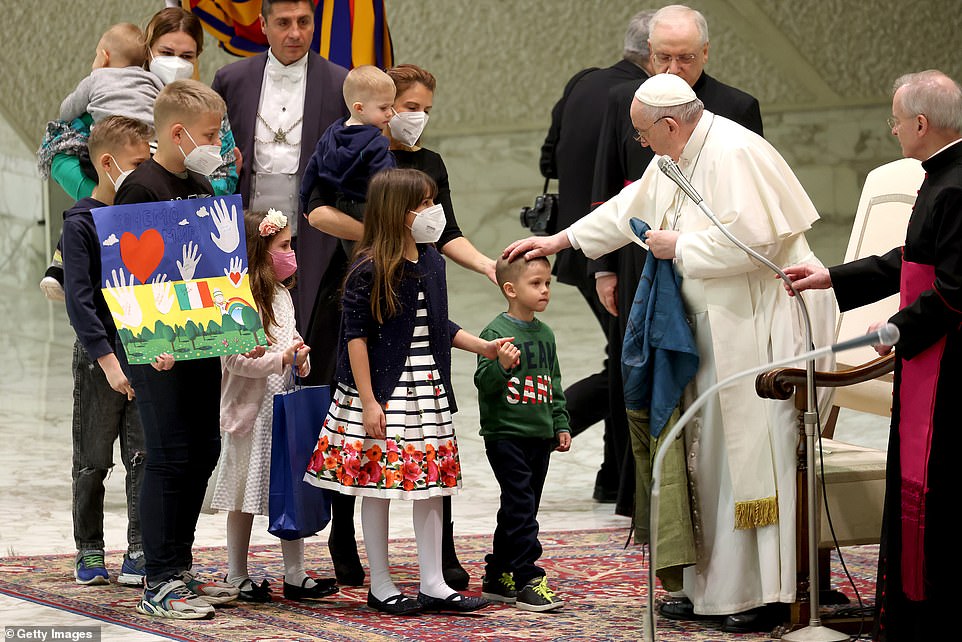 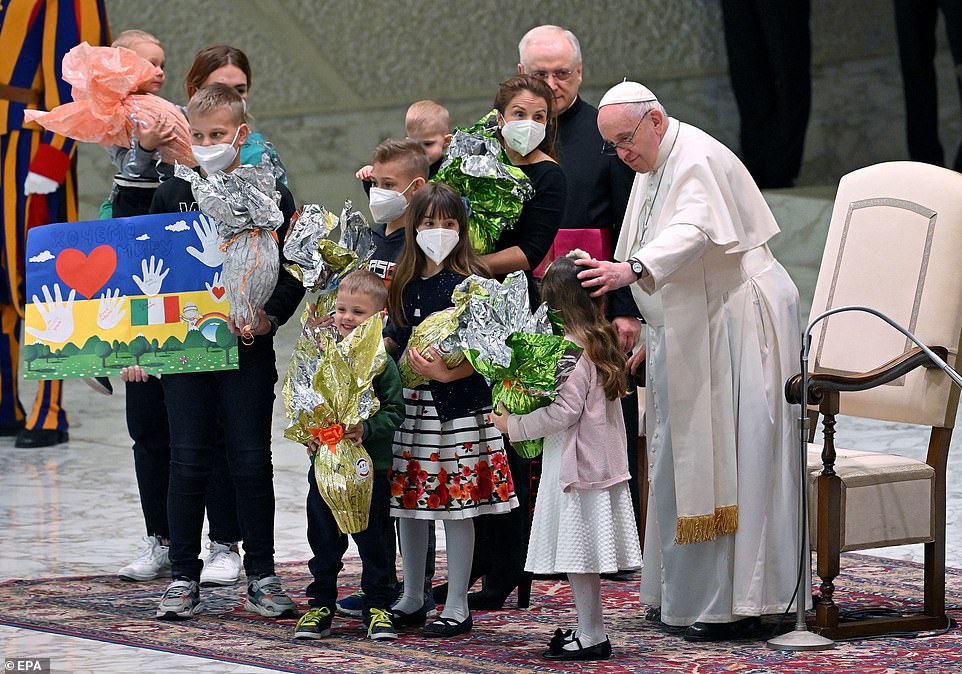 Francis met with the children during his weekly address, saying their lucky escapes from Ukraine made them the ‘fruits of war’ 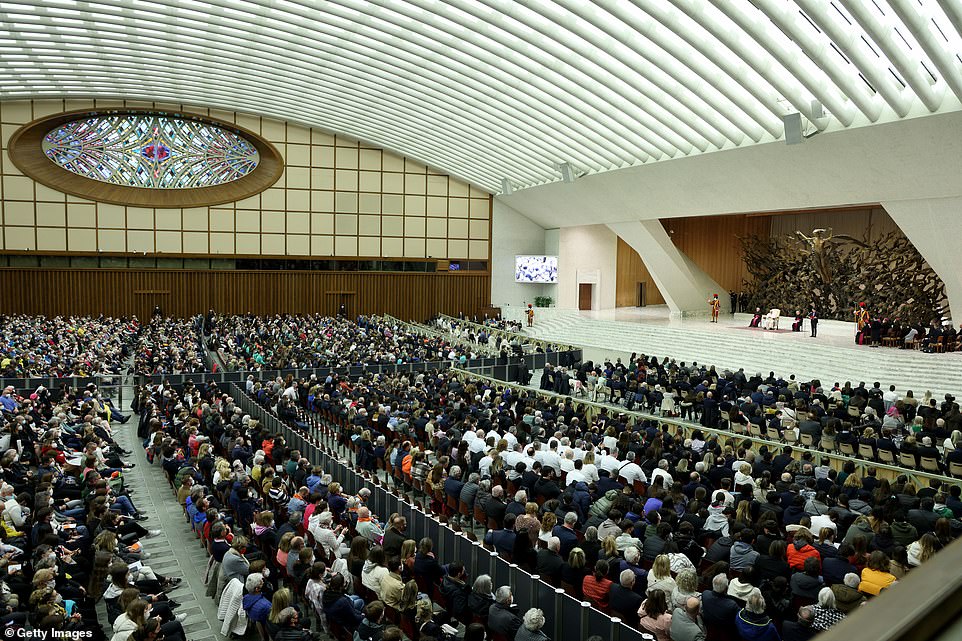 A crowd of thousands gathered at the Paul VI Hall, Vatican City on Wednesday morning to Francis give his weekly address

He pleaded with Putin in March: ‘In the name of God I ask you, stop this massacre.’

Grisly images of what are claimed to be civilian massacres carried out by Russian forces in Bucha before they withdrew have stirred a global outcry in recent days.

Horrifying news out of the Kyiv suburb has prompted Western nations to expel dozens of Moscow’s diplomats and propose further sanctions, including a ban on coal imports from Russia.

President Zelensky has described the targeting of innocent Ukrainians, including women and children, as ‘war crimes’ and ‘genocide’. 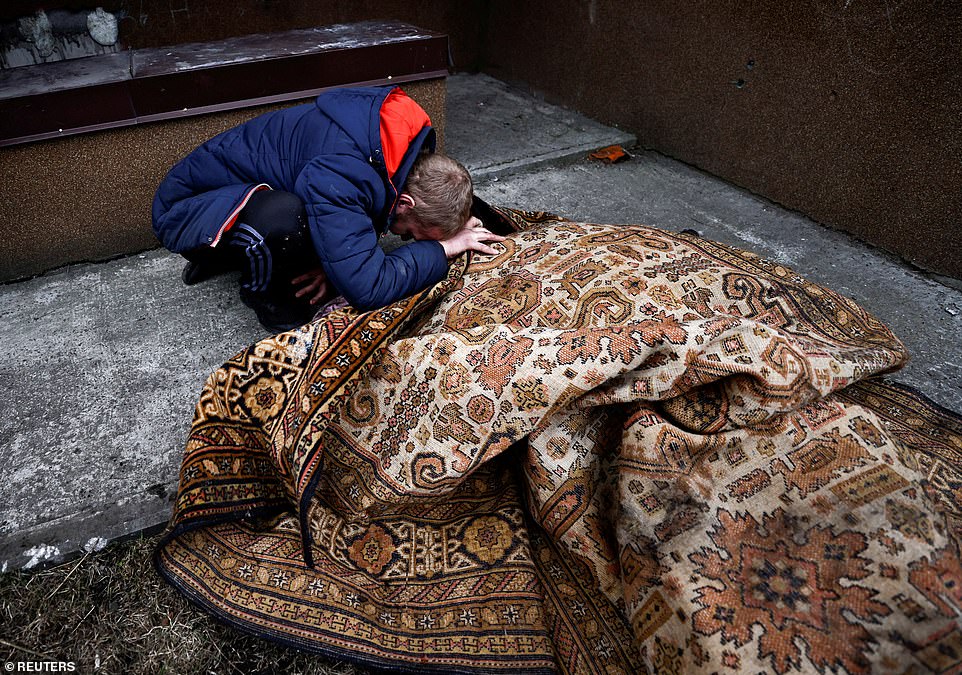 Serhii Lahovskyi, 26, mourns his friend Ihor (covered by a house rug) in stricken Kyiv suburb Bucha after their street was hit 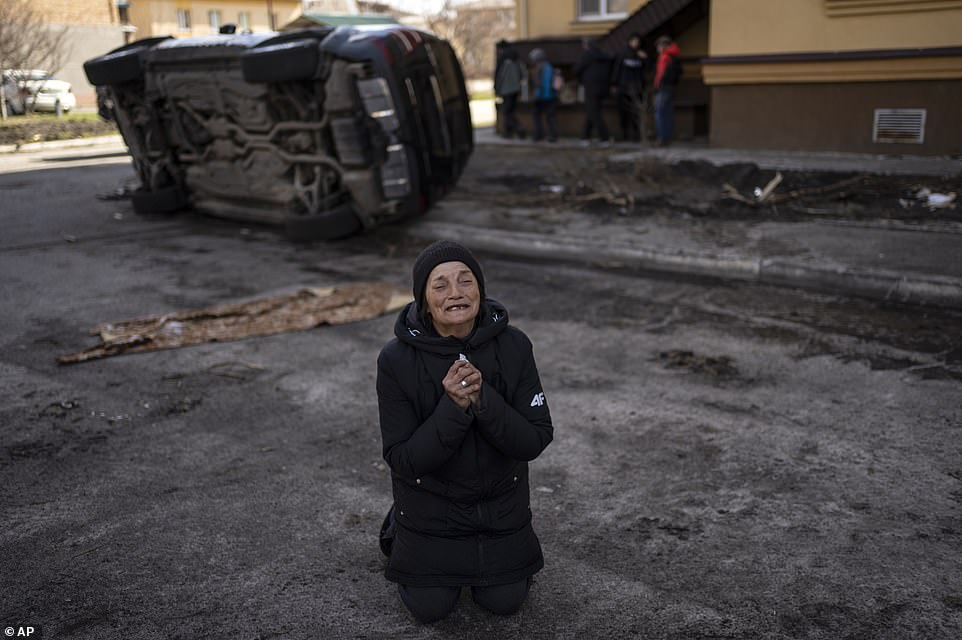 Tanya Nedashkivs’ka, 57, weeps in the street over the death of her husband at the hands of retreating Russian forces 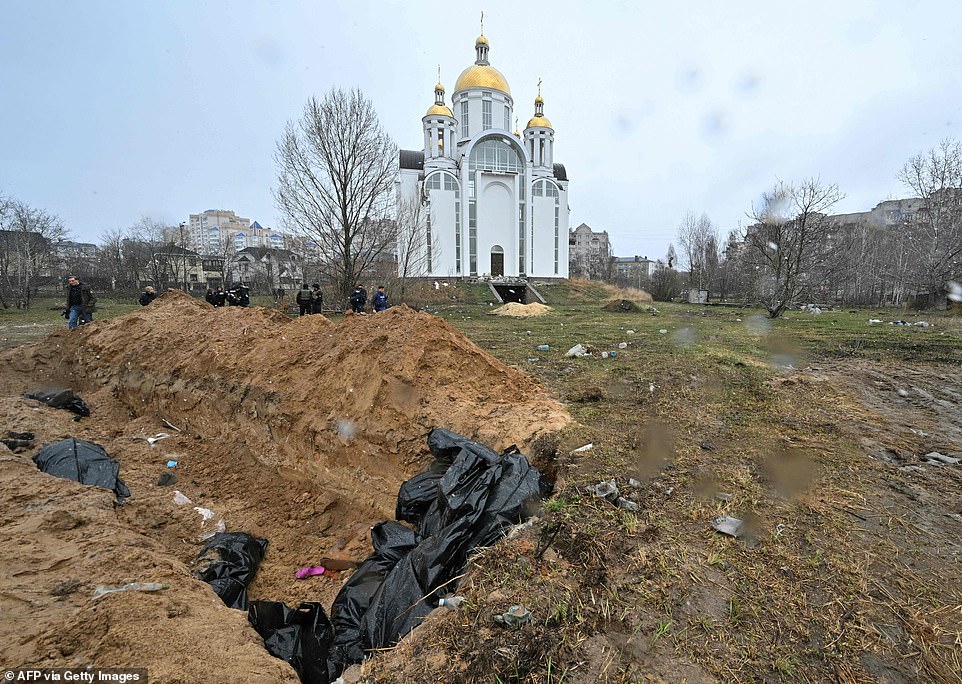 A civilian mass grave was discovered next to the City Church of Bucha. Mayor Anatoly Fedoruk estimated 280 are here alone

Boris Johnson and Joe Biden have repeated these claims. The US president called for a war crimes trial in the wake of the Bucha killings.

Speaking to the UN security council, Zelensky reported civilians were shot in the head after being tortured.

Some, he said, were crushed to death by tanks while in their cars.

‘They cut off limbs, cut their throats. Women were raped and killed in front of their children. Their tongues were pulled out only because their aggressor did not hear what they wanted to hear from them,’ he said. 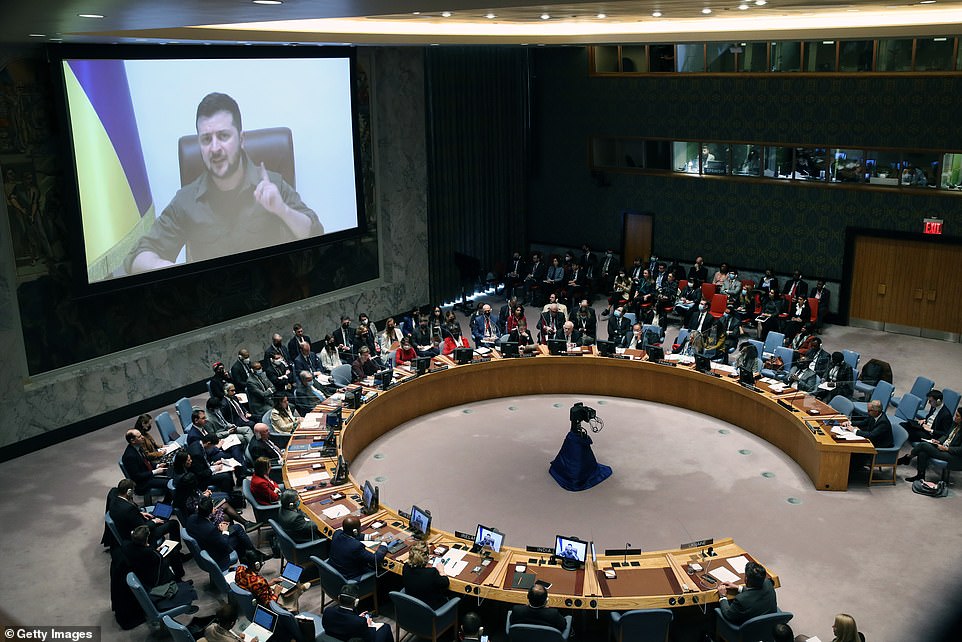 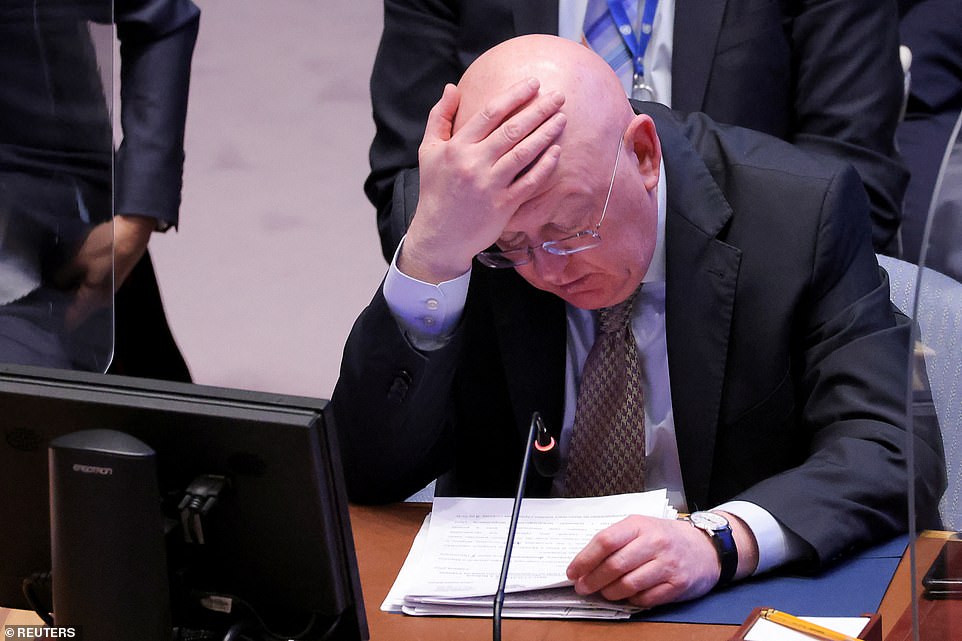 ‘Anyone who has given criminal orders and carried them out by killing our people will be brought before the tribunal which should be similar to the Nuremberg tribunals.’

Making his first appearance before the UN’s highest body, Zelensky said the Russian troops are no different from other terrorists.

He showed the council brief video footage of bloody corpses that ended with the words ‘Stop Russian Aggression’.

He stressed that Bucha was only one place and there are more with similar horrors and called for a tribunal similar to the one set up at Nuremberg to try war criminals after the Second World War.

Secretary of State Blinken says Putin’s troops are on a ‘deliberate campaign to rape, kill and torture’ in Bucha and UN Ambassador says reports of Russians being sent to ‘filtration camps’ are ‘chilling’

Secretary of State Antony Blinken pulled no punches after the horrific accounts that came out of Bucha, Ukraine, claiming Tuesday that Russia was on a ‘deliberate campaign to kill, to torture, to rape.’

‘As this Russian tide is receding from parts of Ukraine, the world is seeing the death and destruction left in its wake,’ he told reporters as he flew to Brussels. ‘What we’ve seen in Bucha is not the random act of a rogue unit. It’s a deliberate campaign to kill, to torture, to rape, to commit atrocities. The reports are more than credible. The evidence is there for the world to see.’

At the same time U.S. Ambassador to the UN Linda Thomas-Greenfield noted that Ukrainians were being taken to ‘filtration camps’ in Russia. Russian federal security agents are now taking away passports, IDs and cell phones so Ukrainians cannot escape and ripping apart families, she said.

‘I do not need to spell out what these so-called filtration camps are reminiscent of. It’s chilling and we cannot look away. Every day we see more and more how little Russia respects human rights.’

Blinken said that the U.S. is working with other nations to gather evidence to help the Ukrainian prosecutor general and the UN Human Rights Council in investigations.