A Seattle man who was arrested on suspicion of committing a hate crime against Democratic Rep. Pramila Jayapal has been released from jail because prosecutors say they’re still gathering evidence in the case.

Brett Allen Forsell, 48, was arrested outside Jayapal’s home on Saturday night, when police say he was standing in the middle of the street with a .40-caliber Glock 22 handgun holstered on his waist.

Jayapal had called 911 to report someone outside her home yelling obscenities, and a neighbor told cops the suspect had been shouting threats and slurs, including ‘I’m going to kill you’ and ‘go back to India.’

King County prosecutors said Seattle police released Forsell on Wednesday because they couldn’t say with certainty that he uttered the threats and racial slurs, the Seattle Times reported. 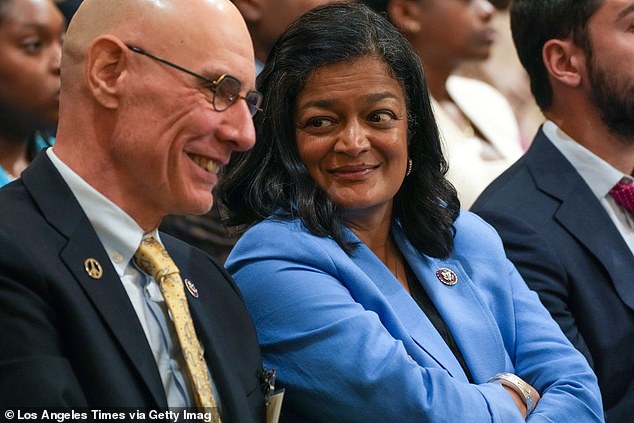 Rep. Pramila Jayapal, the Progressive Caucus Chair, was at home in Seattle with her husband, Steve (with her above), when she called 911 to report a man shouting obscenities

Washington state has permissive open carry laws, and does not require a permit to open carry. Court records also show that Forsell had a concealed carry permit, and he was not charged with any gun-related crimes in the incident.

In 2016, Jayapal became the first Indian-American woman elected to the US House of Representatives. Forsell is listed in police documents as white.

The shocking incident unfolded at around 11:25 p.m. on Saturday, when police responded to Jayapal’s home in the Arbor Heights neighborhood.

There, cops found Forsell ‘standing in the middle of the street with his hands in the air’ with a holstered gun, according to a police statement of probable cause, which redacted the suspect’s name.

Jayapal had told a 911 dispatcher that the man was screaming obscenities and that her husband thought someone may have fired a pellet gun, according to the statement.

A neighbor told police she heard the man scream something to the effect of, ‘Go back to India. I’m going to kill you,’ the statement said. The neighbor also saw and heard the man drive by Jayapal’s residence at least three times, yelling profanities. 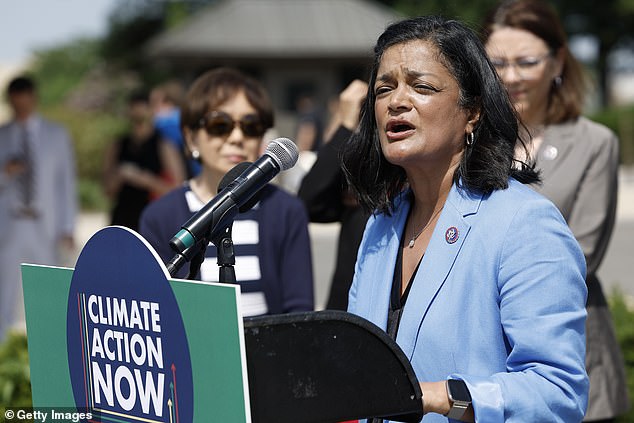 In 2016, Jayapal became the first Indian-American woman elected to the House. Forsell is listed in police documents as white; and he was initially arrested on suspicion of hate crimes

A detective met with Jayapal’s husband, who provided video clips from their home-security system, according to the protection order petition.

In one clip, the last part of the word ‘India’ can be heard, followed by an expletive-laced rant directed at Jayapal, the petition said.

In another clip, the man can be seen approaching the house while yelling profanities about being Jayapal’s neighbor, followed by the sound of metal.

The detective couldn’t be sure if the sound was from a handgun being racked or metal tent poles as the man tried to put up a tent on Jayapal’s property, the petition said.

Police learned the man sent an email to Jayapal’s public account in January, saying he didn’t like her because of her ‘perceived political wrongdoings,’ the petition said. 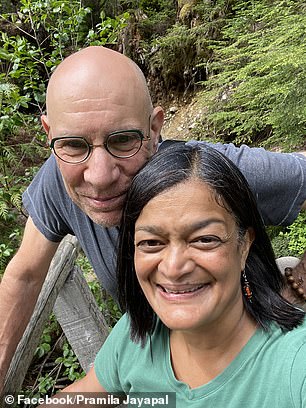 Jayapal’s husband gave cops video clips from their home-security system, but it doesn’t seem they captured the threats in full

He has also driven by her house and shouted obscenities at her multiple times since late June, according to the petition.

The petition notes the man told officers he wanted to purchase an assault-style rifle for protection but denied saying anything about Jayapal’s ethnicity or threatening to kill her.

The investigation is ongoing, and local or federal prosecutors could still file charges.

Seattle prosecutors didn’t decline to file a criminal case — but don’t currently have evidence to prove a hate crime was committed, said Casey McNerthney, a spokesperson for the King County Prosecuting Attorney’s Office.

Following an arrest, prosecutors have 72 hours, not including holidays and weekends, to file criminal charges against a person in custody. If charges are not filed by then, the person must be released from jail.

‘In a time of increased political violence, security concerns against any elected official should be taken seriously, as we are doing here,’ McNerthney wrote in an email Wednesday.

‘The investigation is ongoing and our office is working with police investigators to make sure we understand the full extent of the suspect’s actions to build the strongest case possible.’

Prosecutors declined to name Forsell as the suspect in the case because charges haven’t been filed, but his identity was confirmed through King County booking records.

A judge had ordered him held in lieu of a $500,000 bail on suspicion of malicious harassment and hate crimes, until the court ordered his release on Wednesday. 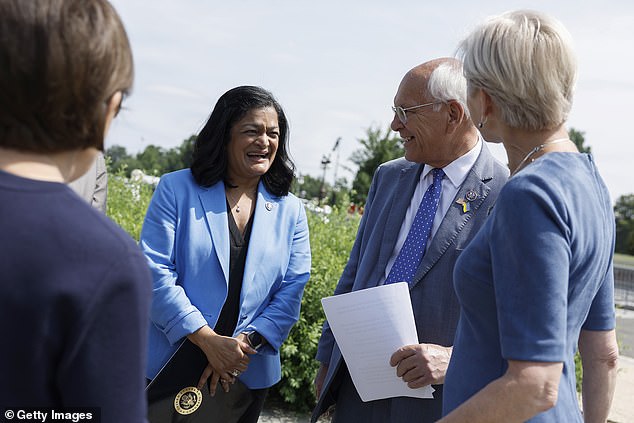 Jayapal, a Democrat, heads the Congressional Progressive Caucus. In a statement, her office confirmed she was at home when ‘incidents occurred at her Seattle home’

Jayapal, a Democrat, heads the Congressional Progressive Caucus. In a statement, her office confirmed that she was at home when ‘incidents occurred at her Seattle home on Saturday night.’

‘The congresswoman and her family are safe and appreciate the many calls and good wishes she is receiving from constituents,’ the statement said.

‘She is very grateful for the swift and professional response from the Seattle Police Department, the US Capitol Police, and the FBI investigators who are working together diligently on the investigation, and ensuring that she and her family stay safe,’ the statement added.

‘Because this is an ongoing investigation, she will not be commenting further at this time.’

Forsell’s mother told police her son recently hadn’t been eating or sleeping and struggling with pain from a workplace injury and with managing his mental health, according to the petition.

She told police it was not a good idea for her son to have access to guns.

Within 14 days of a temporary protection order being issued, a full hearing is held before a judge during which a respondent can challenge it.

The judge then decides whether to deny or grant a permanent order, which bars the respondent from owning or buying firearms for one year.