Teenager, 17, is stabbed to death in London – the seventh person to be knifed in the capital in 24 hours

A teenager has died after being stabbed in broad daylight in Tottenham, north London amid a spate of stabbings in the capital.

The 17-year-old, who was the seventh person to be knifed in London in just 24-hours, died from his injuries after the attack in Orchard Place at around 12:10pm today (June 18).

A spokesperson for the Metropolitan Police said: ‘Police were called at 12.10pm on Saturday, June 18, to reports of a male stabbed in Orchard Place, N17. 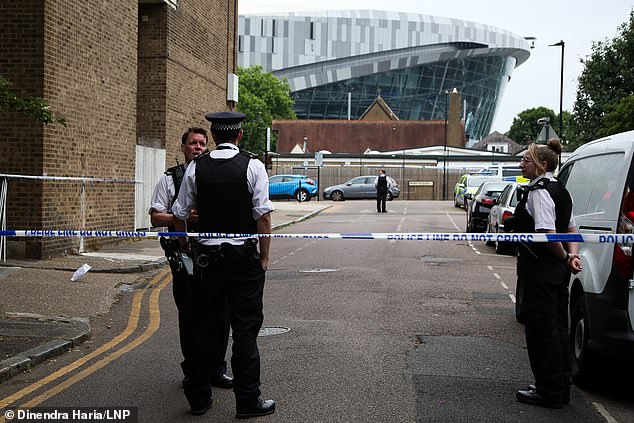 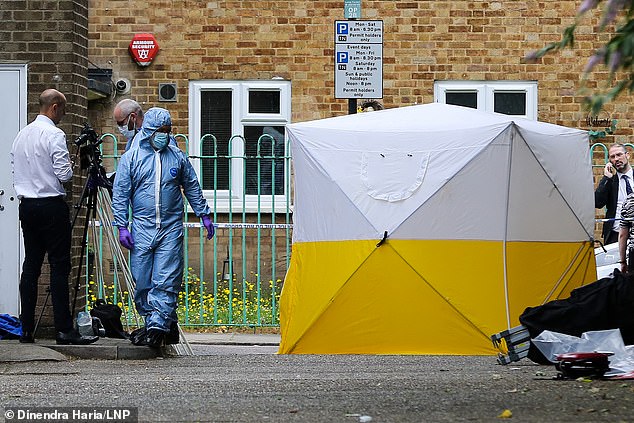 The victim, a 17-year-old male, was pronounced dead at the scene, police have said

‘Despite their best efforts, and those of ambulance colleagues, the 17-year-old male was pronounced dead at the scene. An urgent investigation is under way.

‘Two males have been arrested in connection with the incident and both have been taken into police custody.’

Anyone with information or any witnesses are asked to call 101 referencing 3580/18jun.

The attack is the latest in a spate across the capital in the last 24-hours.

The first incident happened in Bromley, south London, at around 2pm on Friday.

A man in his 20s was found with multiple stab wounds on Beckenham Lane following a callout to emergency services and was taken to hospital by air ambulance. No arrests have yet been made.

A double stabbing took place in Hackney later in the day.

Police were called to the scene on Daubeney Road following a fight at around 4:50pm. 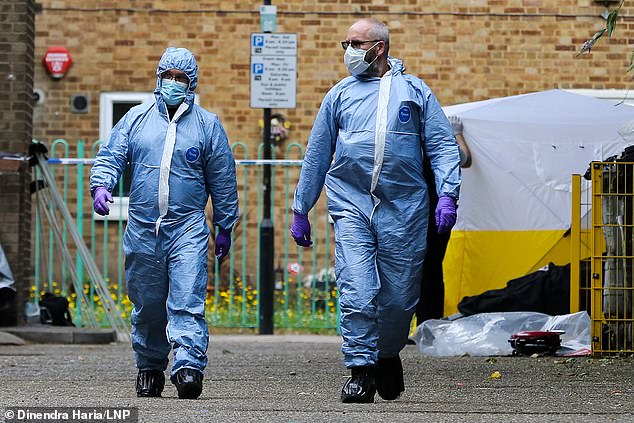 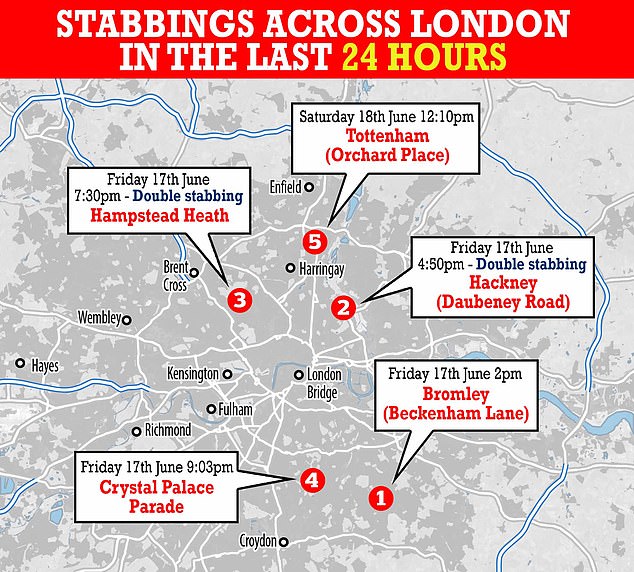 In a statement, the Met Police said: ‘Two males were taken to hospital suffering stab injuries. Neither is in a life-threatening condition.

‘Both males have been arrested in connection with the incident.’

A second double stabbing occurred on Hampstead Heath on Friday evening, resulting in two teens, 17 and 18, being rushed to hospital.

Police have said they were called to the scene at 7.30pm following reports of a group of people fighting at the London park.

No arrests have been made, according to the Express.

Later the same day, a 16-year-old was taken to hospital after he was stabbed in Crystal Palace Parade, south London.

Police arrived on the scene just after 9pm and the teen was taken to hospital.

The wave of incidents of stabbing has prompted police to issue two Section 60s, which give officers increased powers to stop and search anyone in a particular area.

A further attack in the early hours of Saturday morning has left a 20-year-old man fighting for his life and four others injured. During a disturbance in south London, five men were left with knife and gunshot injuries.

London Mayor Sadiq Khan has previously suggested the cost of living crisis could lead to there being more crime in the capital.

‘We must acknowledge that the spiralling cost of living could make things even more challenging and even risks taking us backwards,’ he said.

Office for National Statistics (ONS) data shows that knife crime fell by 7 per cent and gun crime reduced by 18 per cent in 2021.

In London, ONS figures show that the number of teenagers murdered was reduced by 64 per cent in the first five months of 2022 compared to the same period a year earlier.