According to the ‘Oscars of Aviation’, British Airways is the 11th-best airline in the world.

It was given the impressive ranking by the much-respected Skytrax World Airline Awards 2022 – but why? This fascinating video sums it up very neatly. It documents a trip four travel experts from The Points Guy UK (TPG UK) made simultaneously on a single BA Boeing 777 flight between London Heathrow Terminal 5 and Washington DC, with each person occupying a different class of cabin – economy, premium economy, business class and first class.

The reviewers are each full of praise for their seats, with economy lauded for its legroom, premium economy for its comfort, business class for its privacy and first class for five-star-hotel food. But there were some criticisms, from ‘dry chicken’ to ‘poor quality headphones’. Read on for more… 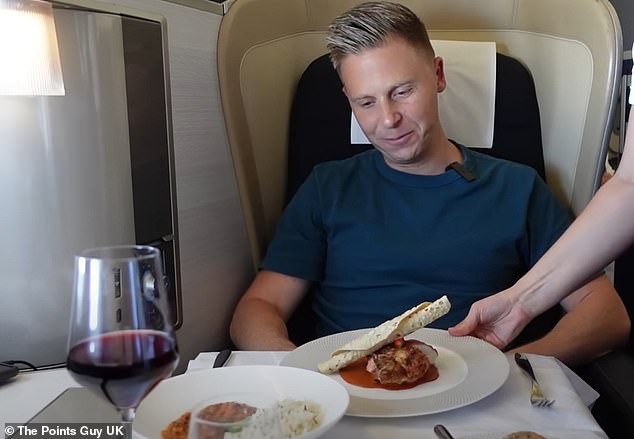 Sitting furthest into the pointy end of the aircraft was Ben Smithson, with TPG UK paying 68,000 Avios, plus £545 for seat 1K.

He was really taken with his suite, revealing: ‘It was a definite upgraded experience versus British Airways business class and overall much better than I was expecting.

‘The food, from presentation to range and taste was genuine fine dining. I would be happy to be served this in a five-star hotel in London.’ 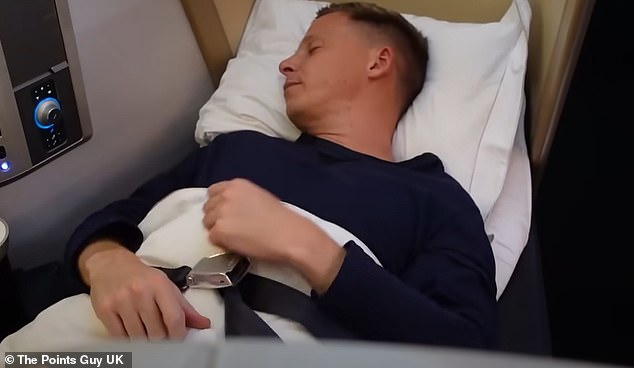 Ben (above) said of first class: ‘It was a definite upgraded experience versus British Airways business class’

Beforehand he was able to relax in the ultra-exclusive Concorde Room lounge, which he described as ‘an airy, light-filled space to enjoy a glass of vintage Champagne while escaping the crowds in the terminal below’.

However, on the downside, he said that the seat ‘is in need of a sliding door to give it privacy’ and the entertainment screen ‘was old, clunky and fairly low resolution’. 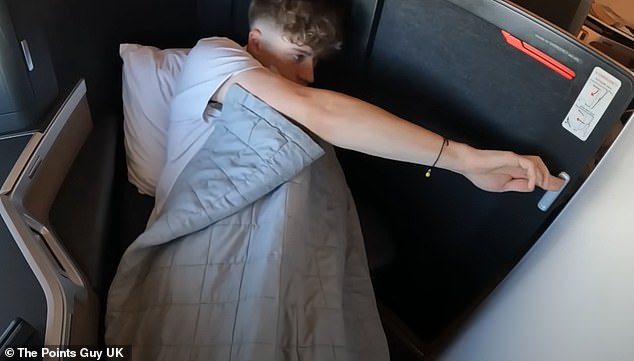 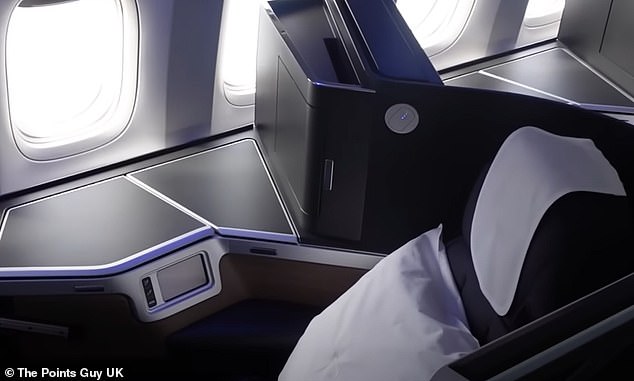 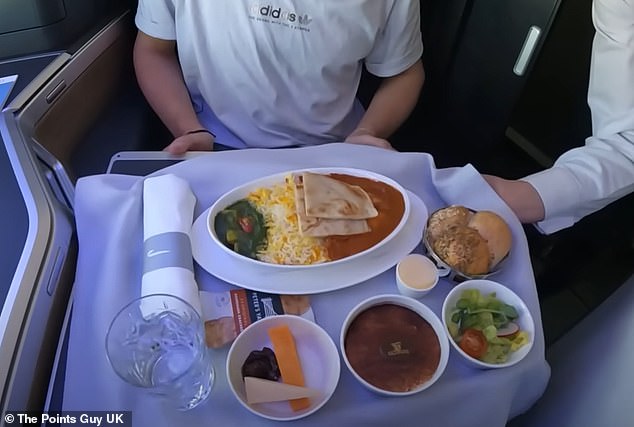 Liam said of the business-class food (above): ‘All delicious, from the starter to the main course to afternoon tea. I opted for the chicken tikka masala for lunch after a recommendation from the cabin crew and it proved to be the best curry I’ve ever eaten on a plane’ 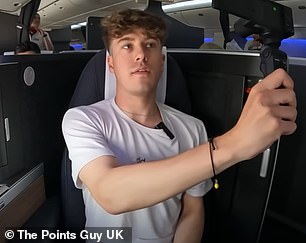 BA’s business class (Club World in BA marketing-speak) ‘Club Suite’ was put to the test by Liam Spencer, TPG UK raiding 50,000 Avios from its vaults, plus £545, for seat 15K.

Liam had a great time, telling MailOnline Travel: ‘This was one of the most spacious business-class seats I’ve flown on. The fully-closing door allows for total privacy and was the real star of the product. The Club Suite cabin felt incredibly fresh, modern and clean.’

He liked the food, too – ‘all delicious, from the starter to the main course to afternoon tea’. He added: ‘I opted for the chicken tikka masala for lunch after a recommendation from the cabin crew and it proved to be the best curry I’ve ever eaten on a plane.’

Any negative aspects to the trip? A few niggles, it turns out.

He said: ‘The Club Suite bed could have been comfier and wider. The bedding itself was perfectly fine, but the footwell was quite narrow. My Club Suite ticket granted me access to the British Airways business class lounges at Heathrow T5. These aren’t a bad place to relax before your flight but are some way behind other business lounges in the same terminal in terms of comfort, design and dining options.’ 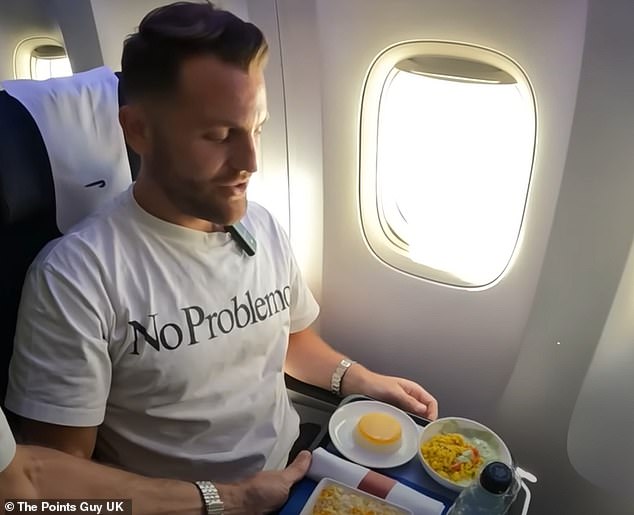 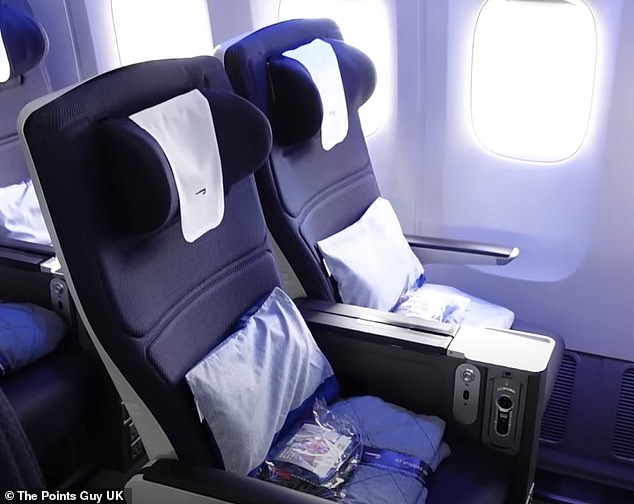 Nicky said of his seat: ‘[It] was very spacious and comfortable and the smaller cabin gave an extra sense of privacy’ 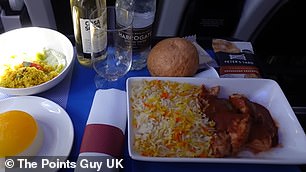 The food in premium economy? ‘Tasty’

Head of Points Guy UK Nicky Kelvin gave BA’s premium economy (‘World Traveller Plus’) cabin a whirl and was full of praise for his experience, which cost his website 26,000 Avios, plus £390.

He said: ‘The seat was very spacious and comfortable and the smaller cabin gave an extra sense of privacy. The food and amenities were a true upgrade from economy and closer to what is provided in business class. Food was served on proper crockery and was very tasty and the meal large enough to satisfy any appetite.’

Any downsides? Nicky added: ‘While the seat was very comfortable for a day flight and has a decent recline, I would still find it very difficult to sleep in this seat on an overnight flight.’ 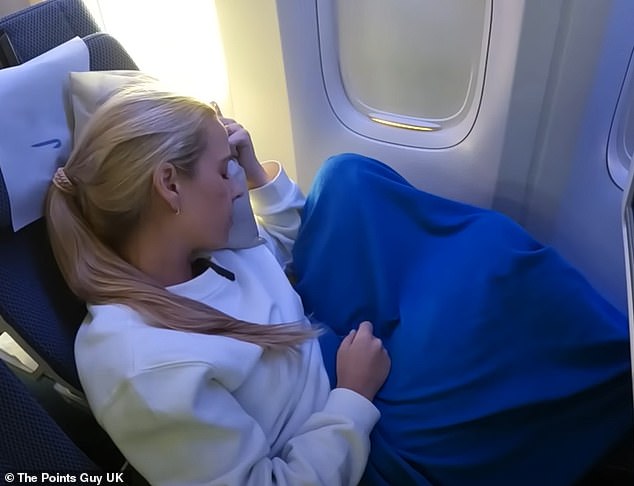 Sitting at the very rear of the flight (economy/’World Traveller’) was Maren Gimnes (above, attempting sleep) 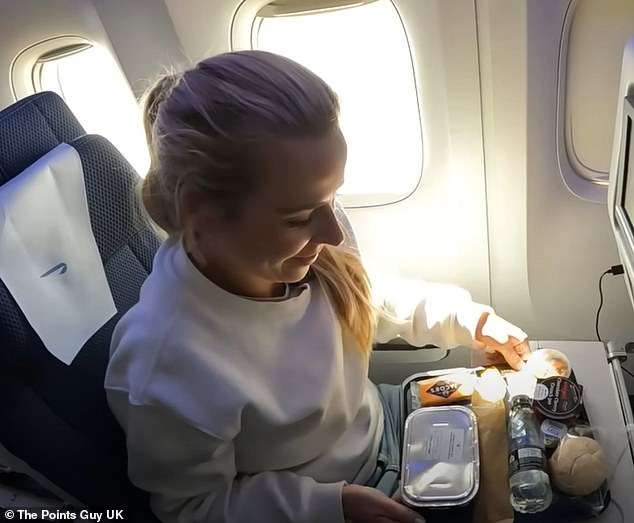 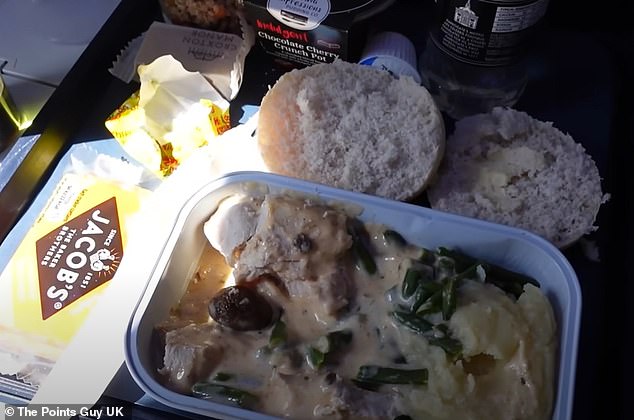 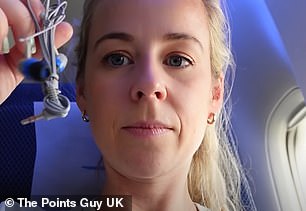 Maren was not impressed with the economy headphones

Sitting at the very rear of the flight (economy/’World Traveller’) was Maren Gimnes, with her ticket for seat 37A costing 13,000 Avios and £290.

The ups for her? ‘Amazing and friendly crew with quick and efficient service’ was ‘up’ No.1.

This was followed by ‘a good amount of legroom’ and pleasing seat design.

She added: ‘The comfy blanket was a lot bigger than I’m used to on long-haul economy flights and I was surprised how many snacks we got between the meals. Plus, it was great to get my own bottle of wine rather than just a glass.’

Maren’s gripes? ‘There was a lot of space between the seat and the fuselage, which made it uncomfortable to rest against the window, the main dish had tasty vegetables, but the meat [chicken] was very dry, and the headphones were poor quality,’ she said.

For more information on travel tips and tricks, sign up to The Points Guy UK. To see the full British Airways Boeing 777 Heathrow to Washington DC review video click here. 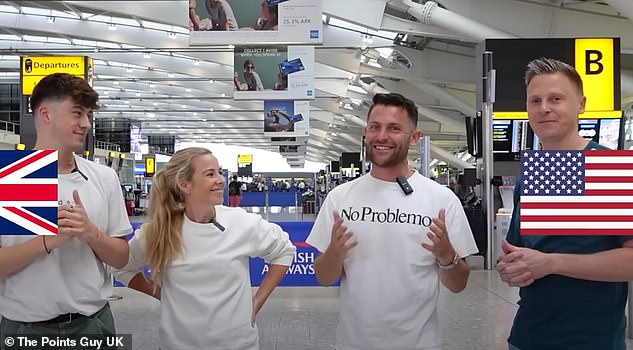 Liam, Maren, Nicky and Ben at Heathrow Terminal 5 before their flight to Washington DC 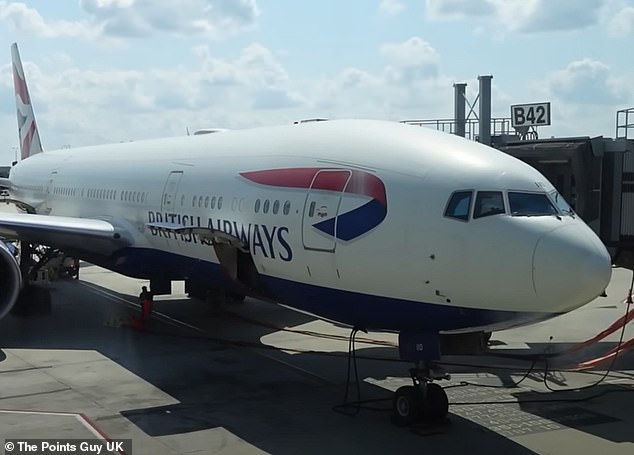 Ready to fly: The team’s Boeing 777 at Heathrow Terminal 5