Victor Osimhen has picked his preferredJersey number ahead of 60 million euros Napoli move.

Victor Osimhen’s imminent move to Italian Serie A side, Napoli received anothe massive boost as the Super Eagles striker has reportedly picked his preferred jersey number at the club.

According to reports, the former Sporting Charleroi striker has picked jersey number 9 which currently being worn by Spanish striker, Fernando Llorente.

Osimhen’s deal is reported to be in the region of 60 million euros but could further raise to 81 million euros when it’s finally concluded. 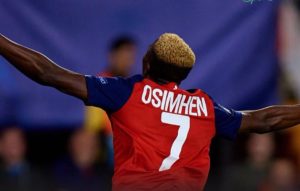 Osimhen’s transfer could see Orestis Karnezis,  Napoli’s third choice goalkeeper be used as a makeweight in the deal.

Other strikers who have won the jersey number 9 include; Gonzalo Huguain, Daniel Fonseca, Nicola Amoruso and Simone Verdi.

His previous jersey numbers include: 18 at Wolfsburg, 45 at Sporting Charleroi and 7 at Lille.