A woman whose father died of Covid was among the crowds of people outside Downing Street cheering the departure of Boris Johnson as Prime Minister today.

Hundreds gathered behind the gates to witness the outgoing premier’s speech from a distance – less than three years after he took the keys to No10 from Theresa May.

One of these included a woman holding a picture of her late father, having lost him during the coronavirus pandemic, during with Mr Johnson was in charge.

The vast majority in attendance appeared to be celebrating the PM’s exit, with only a handful of supporters there still behind him.

The huddle of MPs and aides inside the gates was somewhat dwarfed by the huge numbers outside, booing and jeering as he gave his address.

One of the demonstrators waiting outside Downing Street was holding a placard reading: ‘Get your Johnson out of our democracy’.

While walking away, one of Mr Johnson’s arch loyalists, Tory MP Andrea Jenkyns turned and shouted at the unimpressed crowd: ‘Those who laugh last, laugh the loudest…wait and see.’

Anti-Brexit protester Steve Bray was also spotted outside, carrying his loudspeaker, which he had used throughout the morning in Westminster. 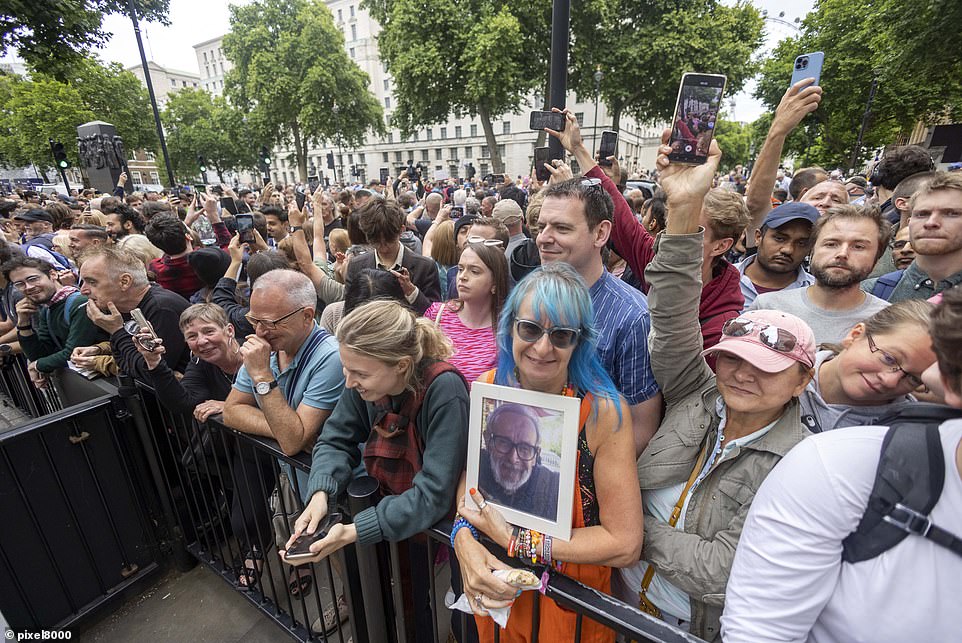 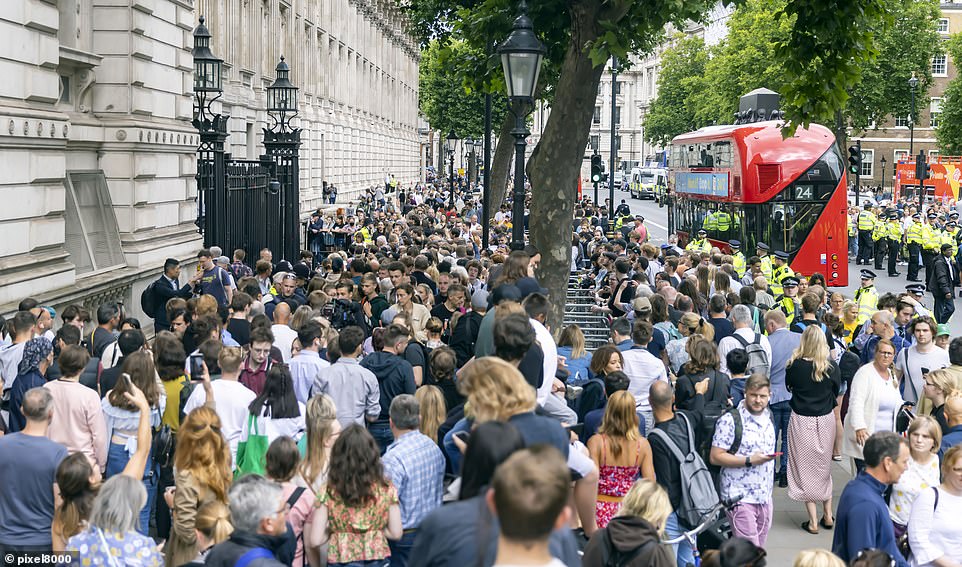 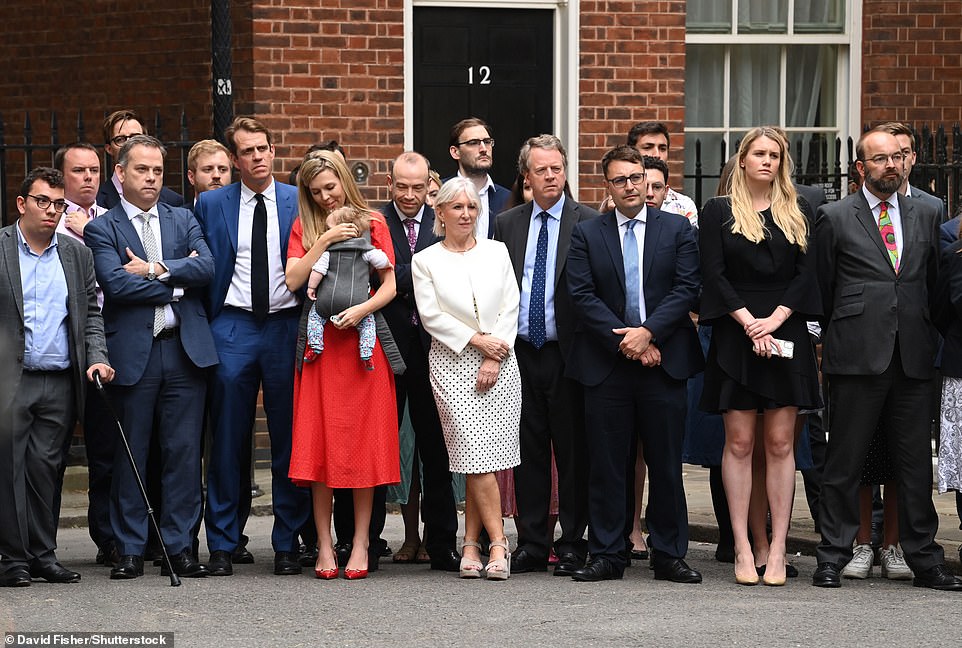 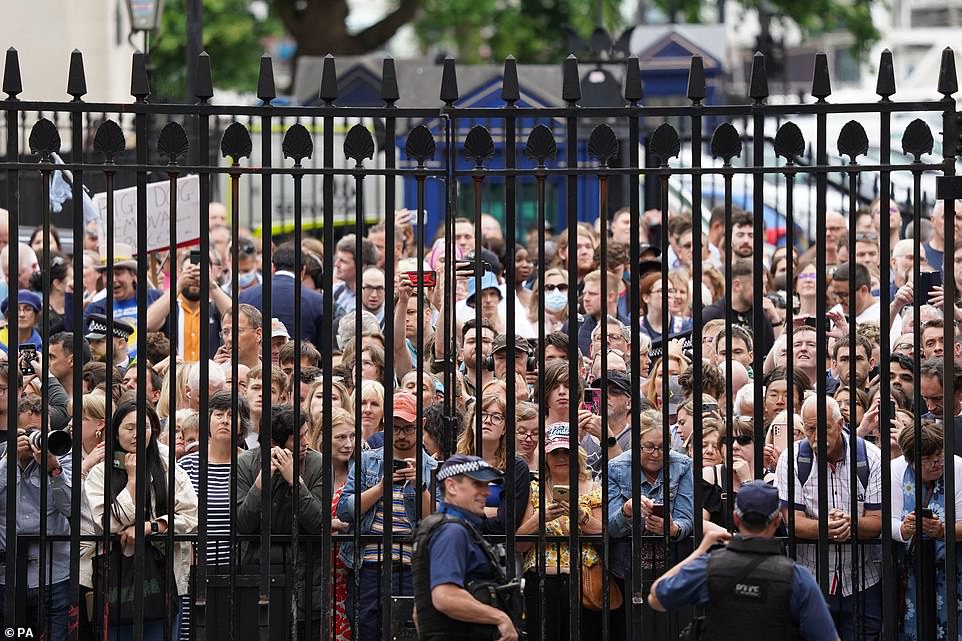 The vast majority in attendance appeared to be celebrating Mr Johnson’s exit, with only a handful of supporters there still behind him 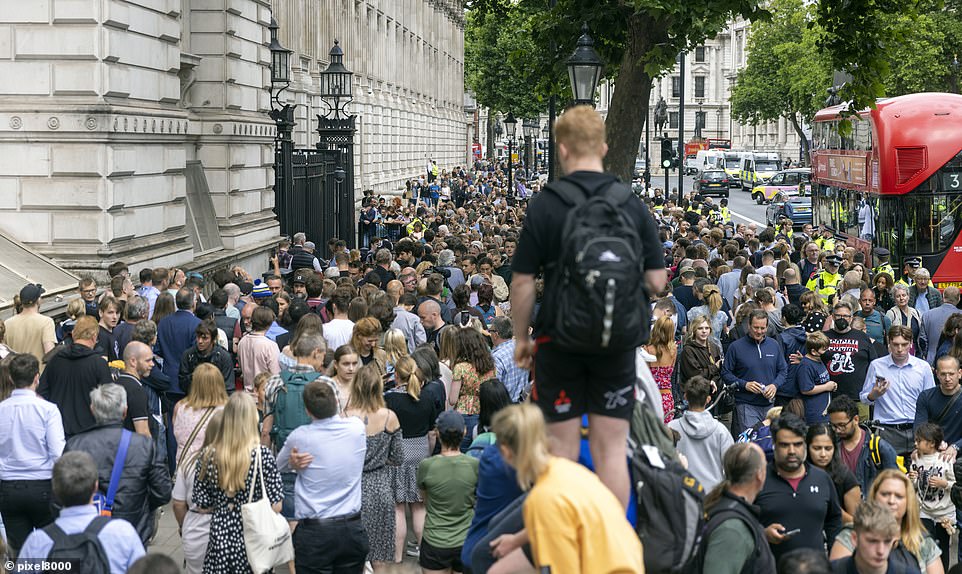 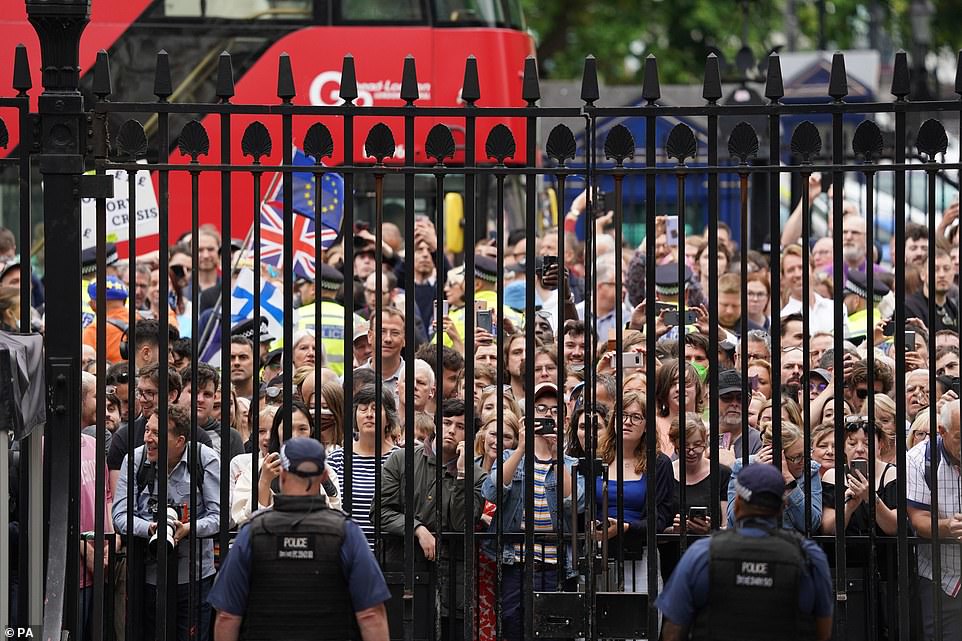 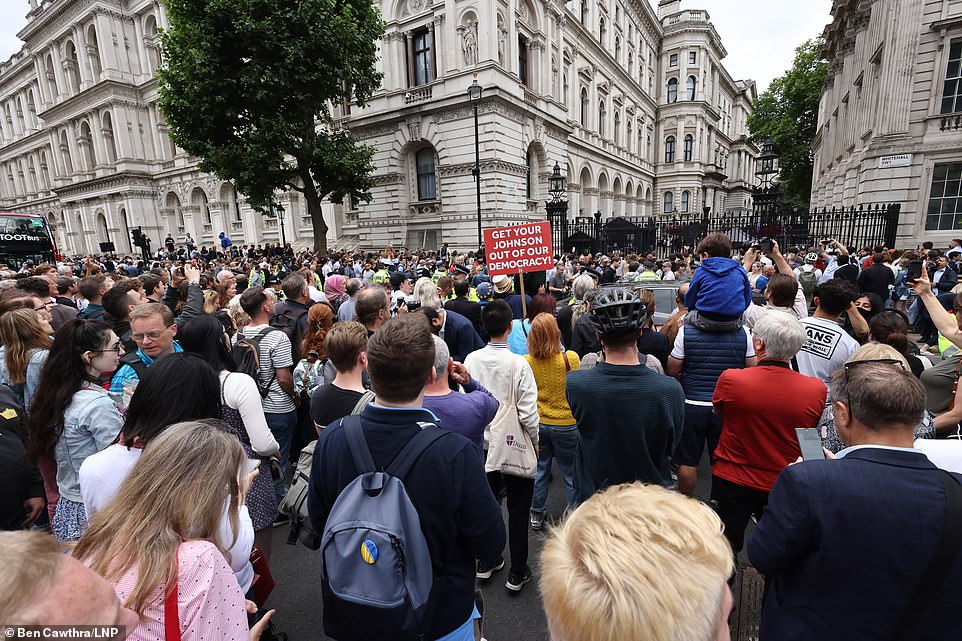 Hundreds waited outside the gates of Downing Street, with one holding a placard reading: ‘Get your Johnson out of our democracy’

Mr Johnson finally announced his resignation today admitting ‘no-one is indispensable’ – but is lining up a ‘unity Cabinet’ as he battles to stay in Downing Street for months longer.

In a statement outside No10, the PM tried to sound an upbeat tone as he confirmed his MPs ‘clearly’ want a change and his time in office will come to an end when a new Tory leader is installed.

Standing at the traditional podium and watched by wife Carrie, baby Romy and close aides, Mr Johnson said the situation was ‘painful’ and branded the move to oust him ‘eccentric’.

But he pointed to his achievements since winning the huge landslide – such as the vaccine rollout, Brexit and coming to the aid of Ukraine.

He said his message to voters who delivered his 2019 landslide was ‘thank you for that incredible mandate’, adding the ‘reason I have fought so hard’ was because he felt it was his ‘job’ to deliver what he promised.

‘I want you to know how sad I am to be giving up the best job in the world, but them’s the breaks,’ he said.

Mr Johnson blamed ‘powerful herd instinct’ for his ousting, saying: ‘In the last few days, I tried to persuade my colleagues that it would be eccentric to change governments when we’re delivering so much and when we have such a vast mandate and when we’re actually only a handful of points behind in the polls, even in mid-term after quite a few months of pretty relentless sledging and when the economic scene is so difficult domestically and internationally.

‘I regret not to have been successful in those arguments and of course it’s painful not to be able to see through so many ideas and projects myself.

‘But as we have seen at Westminster the herd instinct is powerful, when the herd moves, it moves.

‘And my friends in politics, no one is remotely indispensable and our brilliant and Darwinian system will produce another leader, equally committed to taking this country forward through tough times.’ 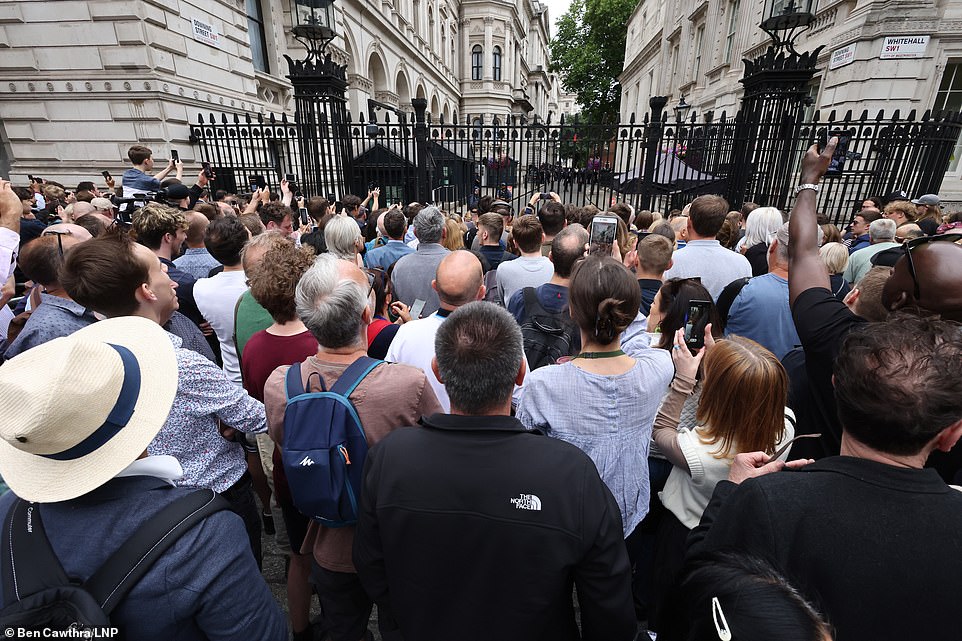 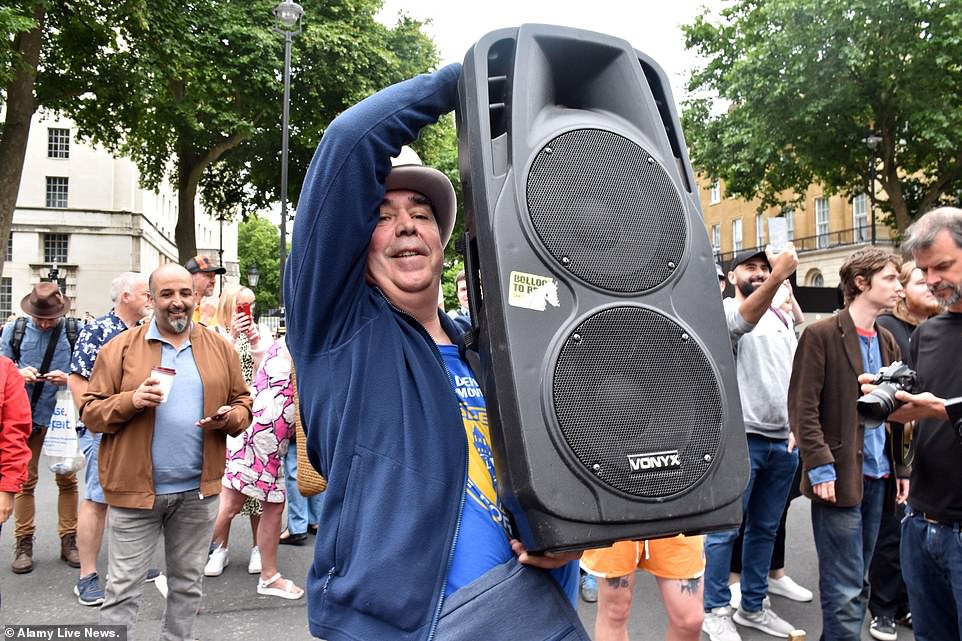 Anti-Brexit protester Steve Bray was also spotted outside, carrying his loudspeaker, which he had used throughout the morning in Westminster 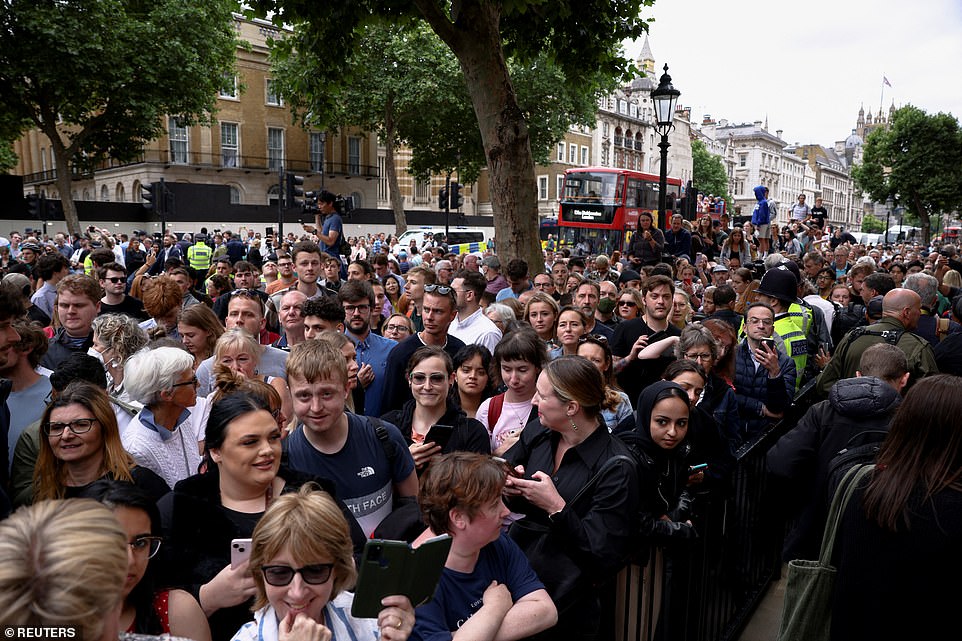 People gather outside Downing Street, where British Prime Minister Boris Johnson made a statement this afternoon 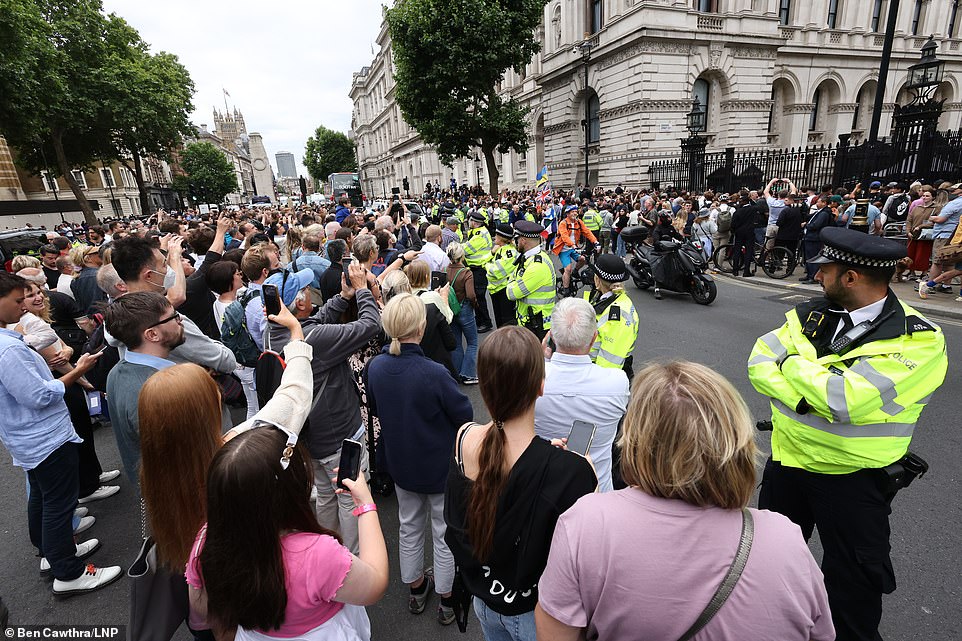 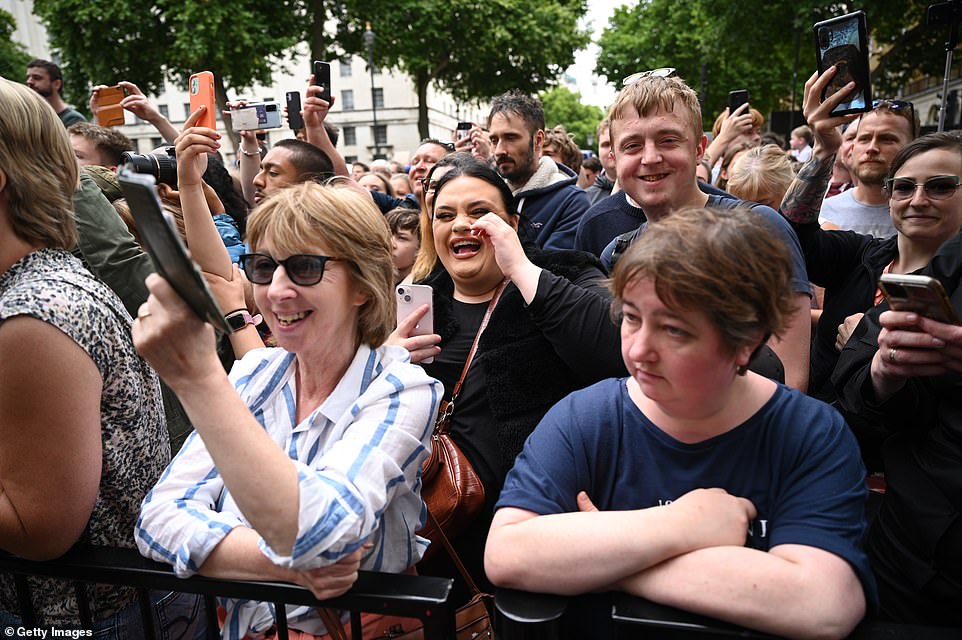 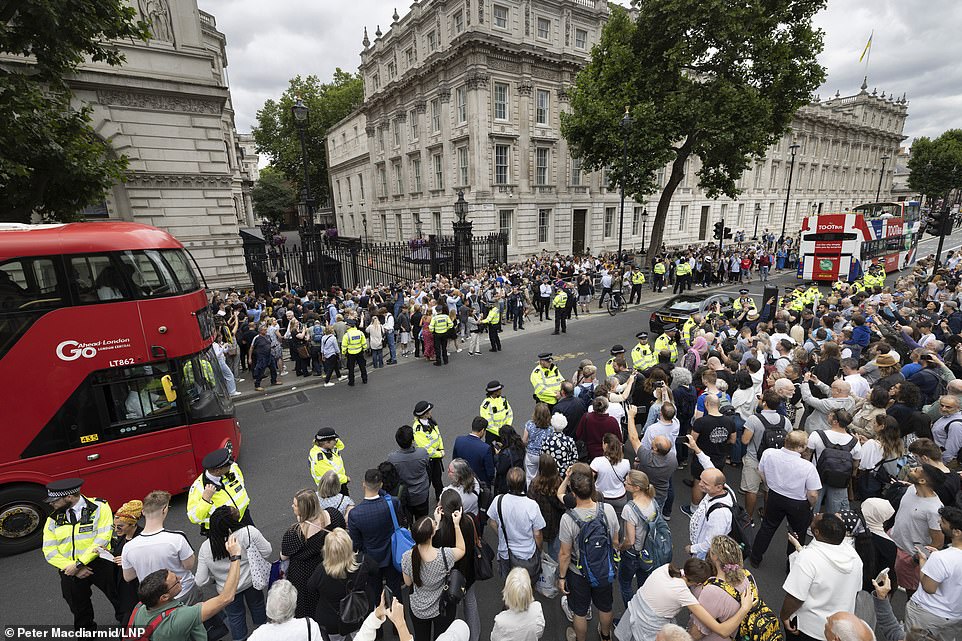 Mr Johnson paid tribute to his family for ‘all they have put up with’, in a nod to the succession of scandals that have blighted his premiership.

No10 had appealed for Conservative MPs to come and watch the speech in the street, but there only seemed to be a small crowd present.

Mr Johnson admitted defeat in the wake of a shattering intervention from Nadhim Zahawi, who was only appointed on Tuesday night following Rishi Sunak’s departure. He told Mr Johnson that his situation is ‘not sustainable’.

A No10 source said Mr Johnson has spoken to Tory 1922 Committee chairman Sir Graham Brady and agreed to stand down, with a new Tory leader set to be in place by the party conference in October.

However, at the same time Mr Johnson has set about rebuilding his Cabinet, making Greg Clark the new Levelling Up Secretary and James Cleverly the Education Secretary. Robert Buckland is returning as Welsh Secretary, and Shailesh Vara takes over as Northern Ireland Secretary.