‘I am a product of rape. My mother was raped and CHOSE to have me’: WWE anchor Kayla Braxton makes shocking revelation about her birth and BLASTS end of Roe v. Wade, insisting women should ‘always’ have a choice

A WWE anchor has revealed that she is a ‘product of rape’ after her mom was sexually assaulted by a stranger as she issued a stinging rebuke of Roe v. Wade being overturned.

WWE anchor Kayla Braxton tweeted: ‘I am a product of rape. My mother was raped by a stranger – to this day, neither of us have any clue who my birth dad is. She chose to have me – clearly – but she did so because she CHOSE to. Not because a law told her she HAD to. It should always be our choice.’

The 31-year-old took a strong pro-abortion stance, after initially sharing a photo of a poster justifying why terminations should be available to women or girls who’ve suffered sexual assault, or whose pregnancy puts their health at risk.

She added: ‘Just want to leave this here for the ignorant and arrogant people who have chosen to remain uneducated about what this means for we women who bare this burden. I did not write this, but it encompasses the reality. I would also add – im pro- a woman doing what’s best for HER.’

Braxton has previously spoken of how she was taken into care in 2000, after her mother Diane went to prison.

They continue to have a good relationship, with Braxton paying tribute to both her biological and foster moms in one Mother’s Day Instagram post.

She was moved to speak out Friday’s Supreme Court opinion overturning the landmark ruling from 1973 that provided constitutional protections for women seeking abortions, triggering nationwide protests. 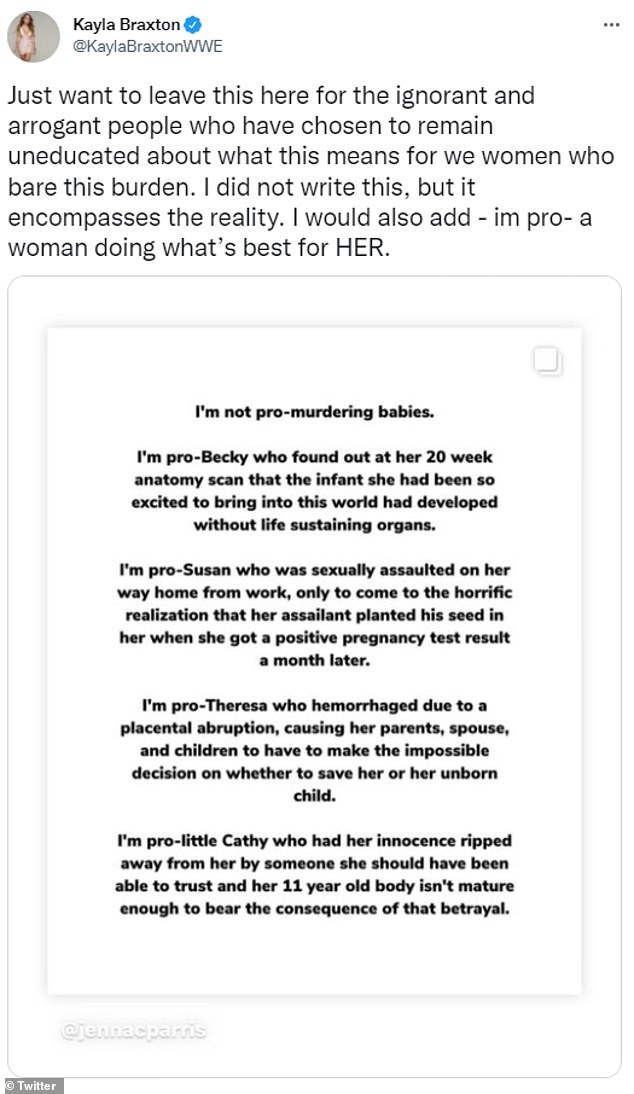 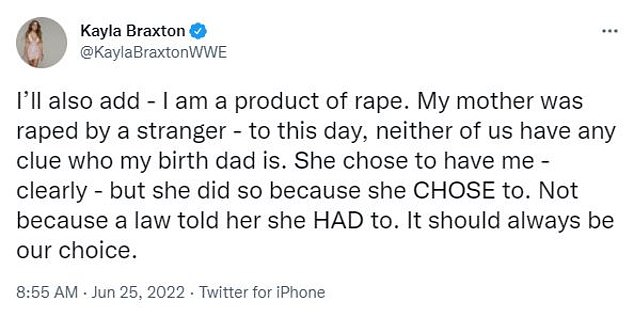 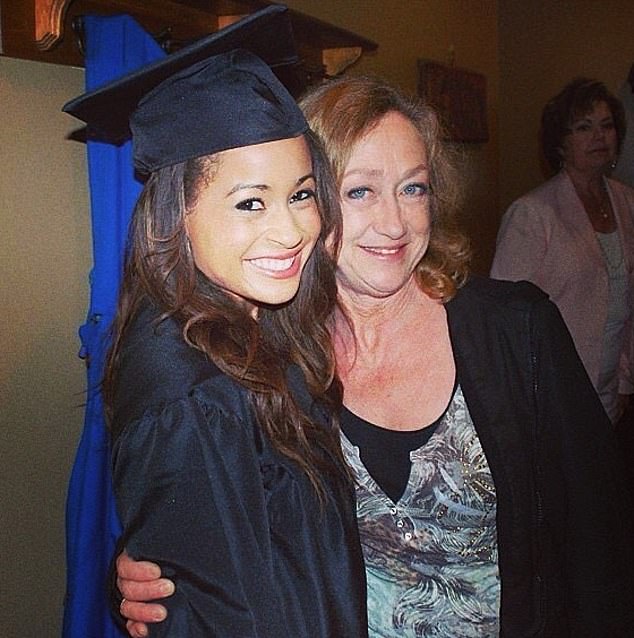 Braxton, 31, pictured here with her mother, revealed on Saturday that she is a ‘product of rape’ after her mother was attacked by a stranger 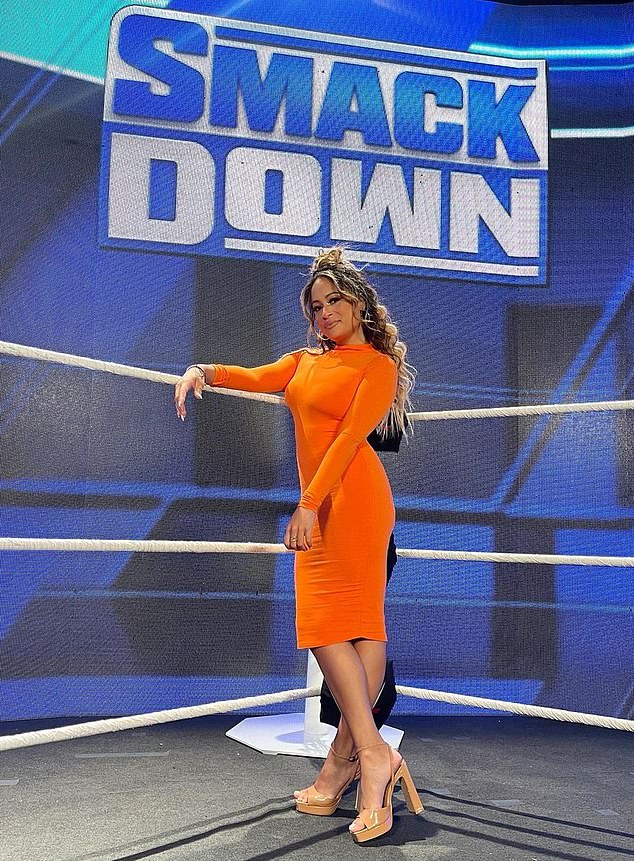 Braxton has been an anchor for the WWE since 2016

Braxton, who is known for her bright personality as a WWE anchor, has previously opened up about her troubled childhood.

She spent most of her young life in the foster care system, posting on her Instagram that a tattoo on her arm ‘August 7, 2000’ has to do with the ‘day my life changed forever.’

‘It’s the date she was taken away from my mother, who was the only parent I knew. But that was also the date that I was given a new family and a chance to become the woman I was always destined to be.’

In another post, Braxton thanks both of her mothers, the one who made the difficult decision to put her into another woman’s care and the one who raised her as her own. 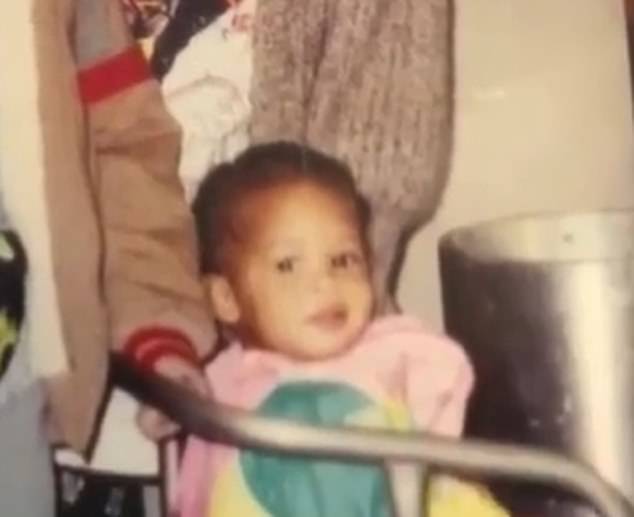 Braxton, pictured here as a baby, spent most of her young life in the foster care system 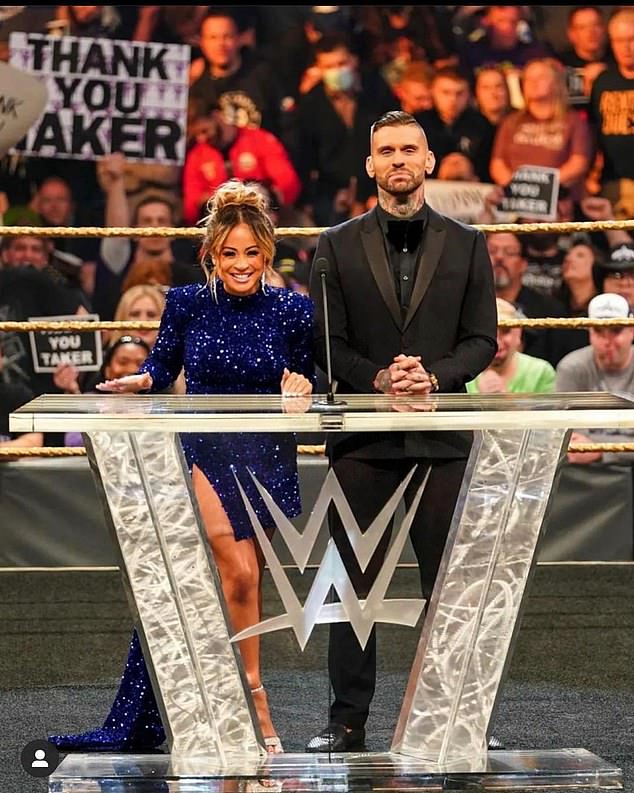 Braxton, who is known for her bright personality as a WWE anchor, has previously opened up about her troubled childhood 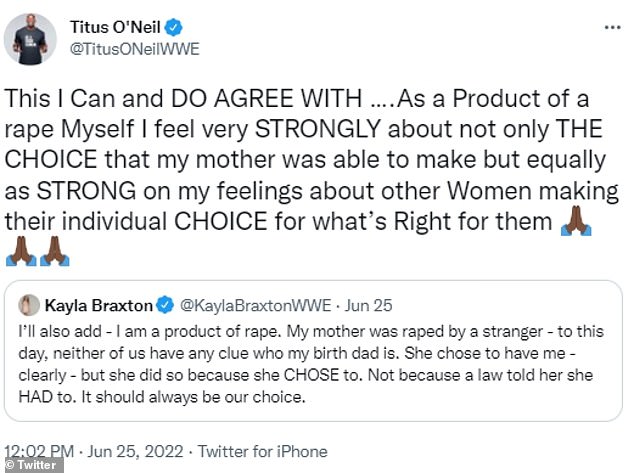 Braxton’s tweets received an outpouring of support by personalities in the wrestling community, including WWE superstar and ambassador Titus O’Neil

Braxton’s comments over the weekend also included included being thankful that her mother had a choice whether or not to have an abortion.

The tweets received an outpouring of support by personalities in the wrestling community, including WWE superstar and ambassador Titus O’Neil.

‘This I Can and DO AGREE WITH ….As a Product of a rape Myself I feel very STRONGLY about not only THE CHOICE that my mother was able to make but equally as STRONG on my feelings about other Women making their individual CHOICE for what’s Right for them.’

The WWE has been previously linked to the GOP with WWE owner Vince McMahon being a longtime GOP donor and supporter. McMahon’s wife, former WWE CEO Linda McMahon, ran twice as a Republican Senate candidate in Connecticut. She lost in 2010 to Richard Blumenthal and 2012 to Chris Murphy.