A tradie who had sex with a drunk law student he met while on a night out has been found not guilty of raping the woman.

Phoenix Cooper, 23, of St Kilda East – 6km southeast of Melbourne’s CBD – was on Friday cleared unanimously by a Supreme Court of Victoria jury in Melbourne – a little over a day after they retired to consider their verdict.

The woman had claimed Cooper had raped her after her uni mates convinced her she had been ‘drug spiked’ by him, the jury had heard. 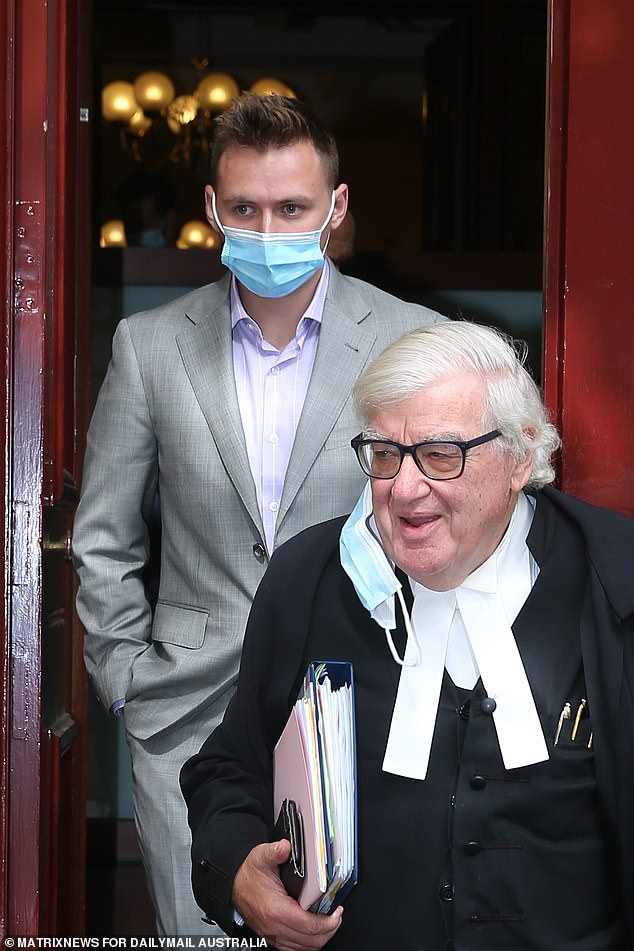 Phoenix Cooper, 23, (left) was represented by one of Melbourne’s top silks, Philip Dunn, QC (right). They are pictured leaving the Supreme Court of Melbourne 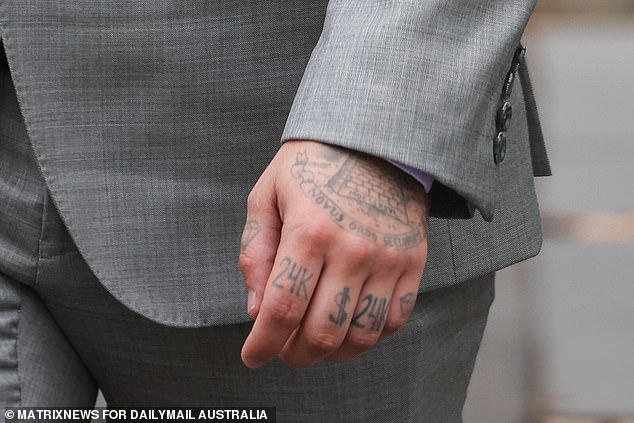 Cooper was described to a jury as being a ‘bit of a bragger’. His hand is tattooed with dollar signs 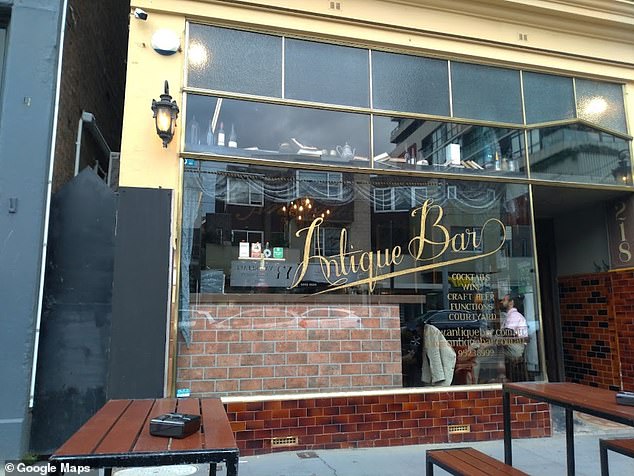 A relieved Cooper thanked Justice John Champion before walking free to try and piece back together his shattered life.

The tradesman had maintained his innocence from the moment police called him in over the disastrous one-night stand.

The jury heard he had been introduced to the woman, who cannot be named for legal reasons, by her law student mate while on a trip to the bar at the Antique Bar in Elsternwick.

Cooper pleaded not guilty to a single charge of rape, claiming he had no idea the brief sexual dalliance he shared with the woman was anything but consensual.

The court heard the woman herself claimed to have no memory of the actual act after her memory became ‘fuzzy’ just after midnight on April 20, 2019.

But that didn’t stop police charging Cooper, alleging the woman was either too drunk to give her consent or had been asleep during the act.

Crown prosecutor Brett Sonnet told the jury by the time the woman left the bar she had consumed wine and martinis off her own bat and accepted shots of cognac and whiskey from Cooper.

When forensic doctors tested her blood alcohol content at 7.55am that morning they estimated she would have recorded somewhere between .135 and a .204 – more than four times the legal limit to drive – when the alleged rape happened.

The court heard Cooper had wooed the woman with tales of his window glazing business, cash and time living in New York.

Later that night, Cooper and the woman left her friends to enjoy a cigar.

‘He definitely has coke,’ the woman’s male uni mate texted as she stepped outside the bar to sit with Cooper. 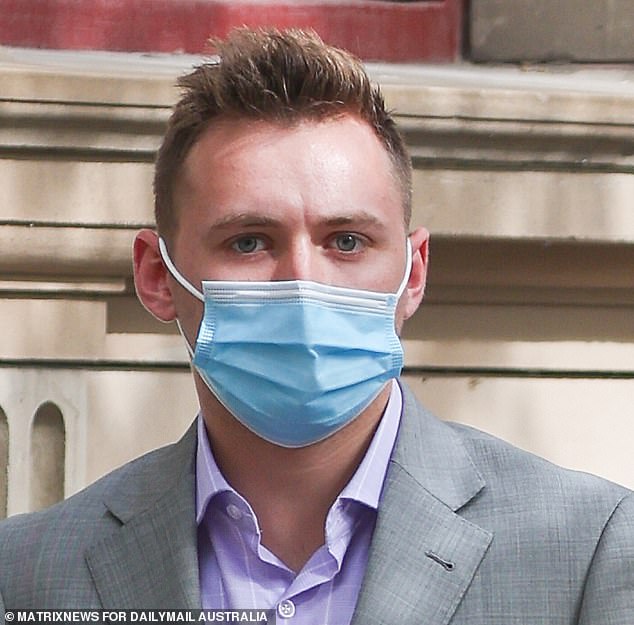 Phoenix Cooper admitted to his alleged victim’s friends he had had sex with her just minutes after the act. He told police the same thing. Then he was charged with raping her 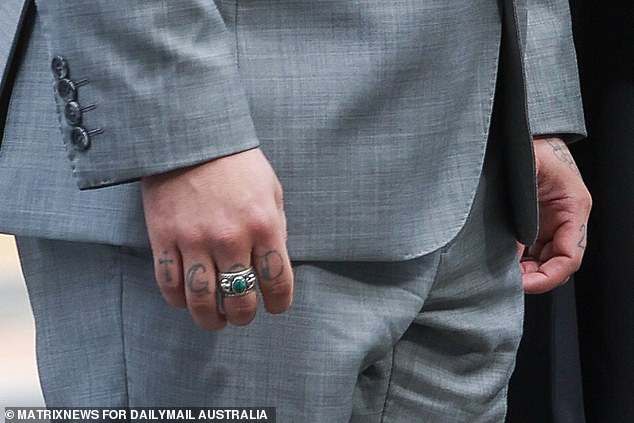 Cooper’s other hand has the word ‘God’ tattooed on it. He had been sharing a home with a born again Christian when he allegedly raped a woman 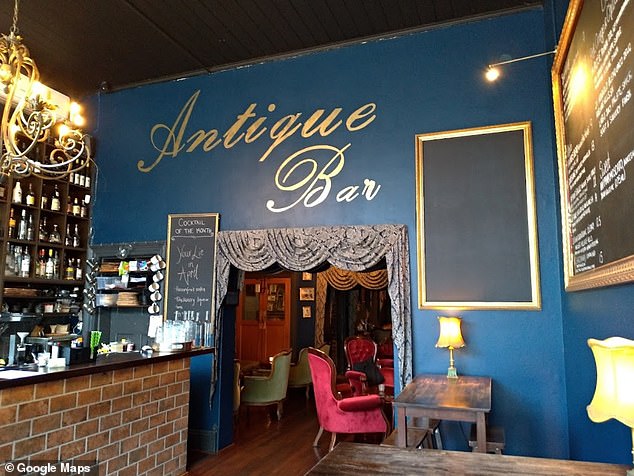 Cooper’s alleged victim had been familiar with the Anti

WHO IS PHILIP DUNN, QC

Philip Dunn, QC, is recognised as one of Melbourne’s top barristers.

He has walked the streets of Melbourne’s court district for near on 50 years.

Back in the 1970s, Mr Dunn represented Norman Lee in the 1976 Great Bookie Robbery, which remains one of the largest Australian armed robberies.

In 1994, alongside Robert Richter QC – who would go onto defend Cardinal George Pell – he represented Detectives Lockwood and Avon, who were charged with the murder of Gary Abdallah following the Walsh Street police murders.

The woman had been accused by the defendant’s barrister – Melbourne silk Philip Dunn QC – of hoping to score drugs off Cooper the night she alleges he drugged and raped her.

The court heard the woman had engaged in a text conversation with her mate about Cooper’s supposed access to cocaine – a conversation she also claims she can’t remember having.

The woman denied any suggestion that she had hoped to get high with Cooper, whom she had only met that night.

The court heard her two friends became concerned when they discovered she had ‘ditched’ them at the club, leaving her purse and house keys, to go home with Cooper, whom her mate later described as ‘some random’.

The couple had been captured on CCTV leaving the Antique Bar just before 1am.

The friends arrived at Cooper’s house later that night after he and their mate had already had sex.

In his closing address to the jury, Mr Dunn said the key issue in the trial was the belief of the complainant’s friend that her drink had been spiked with drugs.

‘(He) becomes convinced that she must be drink-spiked, she must be drugged to be in the apartment with Mr Cooper. Drugged,’ Mr Dunn said.

Mr Dunn told the jury the woman had been surfing dating apps while enjoying pre-outing drinks at her home in the upmarket suburb of Brighton. 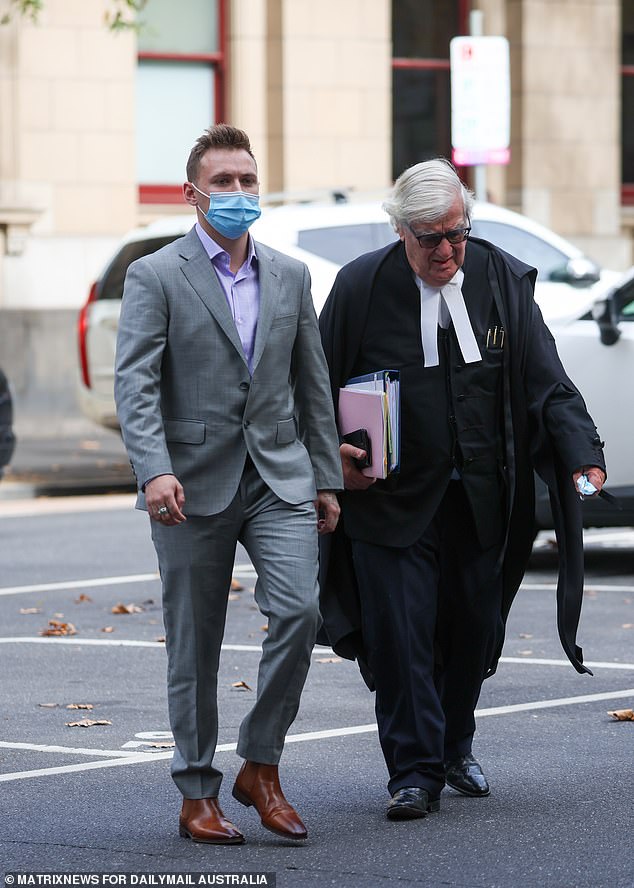 He claimed his client was under the legitimate belief that he ‘was about to get laid’ when the woman climbed into bed with him and stripped off.

Moments earlier she had accidentally climbed into the bed of Cooper’s born-again Christian housemate after a trip to the toilet.

The jury heard the woman recorded a 15 out of 15 on the Glascow Coma Scale – a clinical test used to reliably measure a person’s level of consciousness after a brain injury – a little under an hour after the alleged rape.

‘(She) thinks she’s a victim and when she finds out in November that her drink hasn’t been spiked, there aren’t any drugs, she becomes active in contacting the police,’ Mr Dunn said.

The jury heard the victim repeatedly contacted police asking them about the investigation.

‘She’s a victim. And she writes the note saying “I want and need him charged”. She’s making contact with the police, taking an active role in it,’ Mr Dunn said.

‘Why does she need him charged … the defence suggests because she’s now an entrenched victim.’

Mr Dunn urged the jury to consider what his client must have thought after picking-up a woman at a bar, kissing her and winding up in bed with her.

‘You’re fond of this person, you’re feeling affectionate towards him and the phone rings and the person says “No, I’m not coming home, I’m going to stay here”,’ Mr Dunn said.

‘What do you think? You think they want to stay with you, in a bedroom … they start kissing, she takes her jeans off and then her panties, that it’s a reasonable thing for him to think that she’s up for sex?

HOW A DRUNKEN FLING TURNED INTO A RAPE ALLEGATION

A jury heard the woman had not been keen to talk to her mates after she left the club with Phoenix Cooper.

When she didn’t pick-up the phone, her uni mate managed to track Cooper’s phone number down thanks to his previous bragging.

When he finally picked-up the phone some 20 minutes after leaving the bar, Cooper claimed she didn’t want to speak.

Unconvinced, her law student friend – now in an Uber himself – continued to demand he speak with her.

Concerned about the slurring of her speech, he asked and was provided Cooper’s address so that he could come and check on her.

After that conversation, the woman got out of bed with Cooper and went to the toilet.

When she attempted to return to the bedroom, the jury heard she ended up in the bed of Cooper’s born-again-Christian housemate, who promptly returned her to the correct bedroom.

At 1.20am, the woman’s friends arrived at Cooper’s apartment complex and called him again.

‘Darling your friends are here,’ Cooper was heard to say.

But when Cooper failed to bring the woman down within 10 minutes, her mates proceeded to wake-up the entire complex by pressing every doorbell.

When Cooper and the woman finally went downstairs, it was noted she had no shoes on and her clothes were on back-to-front.

He would later tell police he had never seen his friend in such a state in the eight years he’d known her.

He further claimed when all four of them went back up into Cooper’s apartment to retrieve the shoes, she mouthed the words ‘help me’.

The court heard the woman’s two friends took her to hospital after she vomited in the Uber upon leaving Cooper’s pad.

When cops met up with Cooper days later he freely admitted to having sex with the woman.

Cooper’s barrister told the jury the reason his client hadn’t opened the door for the woman’s friends when they arrived that morning was because they were in the process of having sex, which Mr Cooper freely admitted when he finally opened the door.