The 21-year-old officially joins Chelsea from German Bundesliga side, Bayern Leverkusen for a fee reported to be in the region of £71m. 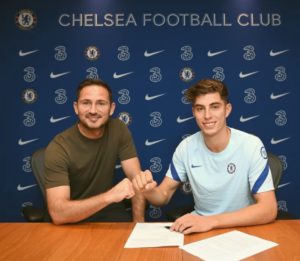 I am very happy and proud to be here, For me, it is a dream come true to play in a big club like Chelsea and I can’t wait to meet all the players and the trainers. Yeah, I am very happy to be here!

Kai is one of the best players of his age in world football, so we are very happy that his future lies at Chelsea. He has proven pedigree in one of the best leagues in Europe, he plays for the German national side and he is an exciting, dynamic talent. We are delighted to be able to add his versatility and quality to the squad before the season begins.’ 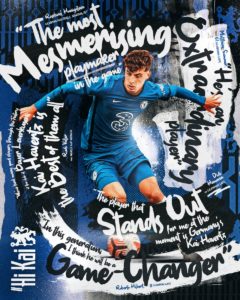 Kai Havertz is predominantly an attacking midfielder but can also play as a false nine when the need arises.

He registered 18 goals and 9 assists in 45  appearances for Bayern Leverkusen last season. In total, he had 46 goals and 31 assists in all competitions for the German side four years stay at the club.