Speaking after the game, Barcelona boss Ronald Koeman had a lot to say.

Here are some of his best quotes

“I liked the team’s dedication. In the first half we weren’t good. But after they scored the 2-1 we got into the game, and we were able to let some players rest. Trincão did very well.” 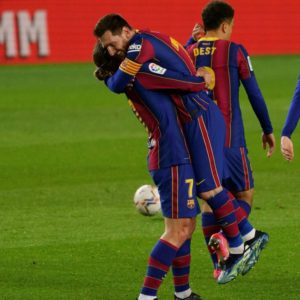 “We have played many games in recent weeks. I gave young people many options to play the game. I really liked the reaction of the team after the score became 2-1. It’s a great result.”

“Tuesday’s match is going to be a nice game. We know we have to perform well in all aspects of the game to qualify.”

“PSG? I see the tie fairly even. We are in a good moment and we will have to be very good in every way to be able to win against them because they’re a great team.”